This multi-million dollar Muslim Brotherhood machine is steamrolling over everyone and everything in their path. Now they are harassing and bullying ordinary American citizens. Hamas-CAIR systematically destroy voices of freedom while using their leftist lapdogs in the media and culture to whitewash their terror ties.

The media and entertainment elites have been doing the bidding of Hamas-CAIR. Just this week, Hamas operative and CAIR founder Nihad Awad spoke at the premiere of the pro-jihad documentary called “Newburgh Sting” at the Tribeca Film Festival. The film is a propaganda piece about the four Muslims who were convicted of plotting to blow up synagogues in the Bronx and shoot down a military jet and sentenced to 25 years in prison.

The CAIR annual banquet is being sponsored by ABC News 7, J P Morgan and other financial institutions. CAIR’s jihad millions buy media and men and now they are going after private citizens.  It sends a message. It sends a message to every single American that if you dare to oppose Islamic supremacism, you will be targeted, smeared, harassed and driven to bankruptcy through legal channels.

I am thrilled that our legal team David Yerushalmi and Robert Muise are going after these Muslim thugs and supremacists. 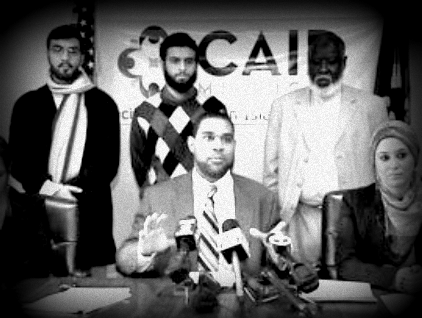 AFLC is representing seven private citizens who were issued harassing subpoenas by the Council on American-Islamic Relations (CAIR) because they publicly expressed their opposition to the construction of an Islamic center in their neighborhood in Pittsfield Township, Michigan.

In 2012, the Muslim Community Association of Ann Arbor (MCA) requested that the Township rezone a parcel of land to build an Islamic School and community center.  The Township denied the request, citing infrastructure and traffic concerns.  Nevertheless, CAIR, which bills itself as “America’s largest Muslim civil liberties and advocacy organization,” filed a federal civil rights lawsuit against the Township on behalf of the MCA, alleging that the denial of the MCA’s rezoning application violated the Islamic group’s constitutional and statutory rights.

The MCA’s rezoning request was opposed by a group of Township residents who live in the neighborhood of the proposed construction.  The residents expressed concerns about the traffic congestion that would be caused by the construction of a school and community center in their neighborhood.  Pursuant to their rights protected by the First Amendment, these private citizens circulated and submitted to their elected Township officials a petition expressing their opposition to the rezoning and several of them spoke out at public hearings held by the Township to discuss the matter.

As a result, CAIR served harassing subpoenas on a number of these citizens, demanding that they produce private emails and other documents, and in some cases, appear for a deposition.

Indeed, AFLC is representing a husband and wife who came home one day to find several papers jammed in the crack of the front door of their home.  The papers included subpoenas demanding the production of personal emails and other documents and a subpoena commanding the wife to appear at a deposition.

In response to CAIR’s discovery requests, AFLC filed a motion to “quash” and for a protective order in the United States District Court for the Eastern District of Michigan, arguing that CAIR’s discovery demands were harassing, irrelevant, and oppressive.  As stated in AFLC’s memorandum in support of its motion:

As a private citizen and resident of the Township, [AFLC’s client] has a fundamental right to publicly express to her elected officials her opposition to Plaintiff’s proposal, which will personally impact her by increasing traffic in her neighborhood.  [AFLC’s client] had no authority whatsoever to either grant or deny Plaintiff’s rezoning application—she is a private citizen, not a public official.  Her personal views, whether expressed to the Township, Township officials, or her neighbors, are not remotely relevant in this litigation.

Robert Muise, AFLC Co-Founder and Senior Counsel, commented: “There is no doubt that CAIR – a sharia-adherent Islamist group that notoriously uses the legal system to silence any opposition to its nefarious agenda – is abusing the discovery process to retaliate against and intimidate private citizens who dared to publicly express their opposition to the Islamic center.  AFLC is quite familiar with CAIR’s bullying tactics, which is why it is important that we defend these private citizens’ constitutional rights.”

David Yerushalmi, AFLC Co-Founder and Senior Counsel, commented: “CAIR’s discovery demands plainly infringe upon precious First Amendment liberties and the paramount right of a private citizen to publicly express her opinions to elected representatives on matters that affect her and her community.  On a broader level, CAIR’s decision to browbeat these ordinary Americans clearly shows the pervasiveness of sharia-adherent Islam and its ‘civilizational jihad’ within our borders.  Needless to say, if CAIR wishes to persecute Americans through the legal system, they’ll have to contend with us.”

CAIR, a self-described Muslim public interest law firm, was previously named as a Muslim Brotherhood-Hamas front group by the FBI and the U.S. Attorney’s Office in the federal criminal trial and conviction of a terrorist funding cell organized around one of the largest Muslim charities, the Holy Land Foundation (HLF).  HLF raised funds for violent jihad on behalf of Hamas, and top CAIR officials were part of the conspiracy.  As a result, the FBI publicly announced that it has terminated any outreach activities with the national organization.