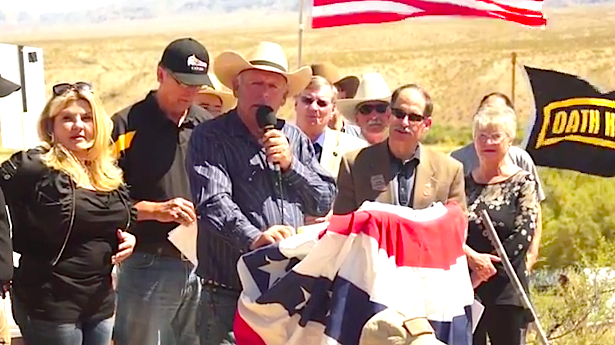 The controversy over Cliven Bundy’s “racist” remarks has taken a new turn after longer unedited footage emerged showing the Nevada cattle rancher making pro-black and pro-Mexican comments that were excised out of media reports.

The full clip illustrates how the original New York Times report edited out statements made by Bundy both before and after his supposedly “racist” remarks, which when taken in their full context actually constitute a pro-minority position. Media Matters also cut out these crucial comments from their YouTube upload of Bundy’s remarks.

Bundy’s full comments are reprinted below, with the parts not printed by the New York Times and other media outlets highlighted in bold.

And because they were basically on government subsidy – so now what do they do? They abort their young children, they put their young men in jail, because they never, they never learned how to pick cotton. And I’ve often wondered are they were better off as slaves, picking cotton and having a family life and doing things? Or are they better off under government subsidy?

You know they didn’t get more freedom, uh they got less freedom – they got less family life, and their happiness -you could see it in their faces- they were not happy sitting on that concrete sidewalk. Down there they was probably growing their turnips – so that’s all government, that’s not freedom.

Now, let me talk about the Spanish people. You know I understand that they come over here against our constitution and cross our borders. But they’re here and they’re people – and I’ve worked side-by-side a lot of them.

And we need to have those people join us and be with us…. not, not come to our party.

While Bundy’s use of terms such as “negro,” “colored people” and references to picking cotton are undoubtedly politically incorrect (though not unsurprising for a 67-year-old farmer), when taken in its full context, his argument is actually anti-racist in that it laments the plight of black families who have been caught in the trap of dependency on government.

The comments that were also vehemently pro-Mexican were not included in any of the mainstream reports which smeared Bundy as a racist.

“What’s more sad than the refusal to openly discuss the issues – is how quickly the conservative right is willing to throw Bundy to the wolves based solely on the New York Times and Media Matters opinion,” writes the Conservative Treehouse blog, noting that Bundy’s comments are no more controversial than those made by Shirley Sherrod, who was staunchly defended by leftists.

While Bundy’s remarks have been spun as a racist call for a return to slavery, he is clearly using references to slavery only to make a point that blacks are no better off living under the economic slavery of the welfare state.

Furthermore, Bundy’s argument that, “They abort their young children, they put their young men in jail,” is clearly directed at the government’s treatment of black people and is therefore a defense of and not an attack on black Americans.

“It is 100% clear that Cliven Bundy is not saying that blacks should be slaves picking cotton, but that the federal government has created conditions for them so terrible, that their current situation may actually be worse,” writes Jack Flash. “And he’s not blaming blacks for the issues of abortions, and crime and broken families, he’s blaming the Feds. This is the exact opposite of a racist, this is an advocate for the welfare and best interests of blacks. Racist? Why is he praising Mexicans as better than whites, if he’s some sort of white supremacist racist?”