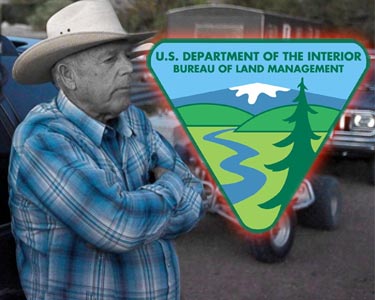 Cliven Bundy has been battling the federal government for the last 20 years. The government claims his cattle have been illegally grazing on federal land – land that has been in the Bundy family since 1880s.

The Bureau of Land Management has been trying to make Bundy pay to use “their” land since 1993.  The agency claims this is about protecting a desert tortoise and feds raided the Bundy Ranch under that guise. That’s interesting, though, considering that they had no problem massacring Bundy’s cattle.

Those who are paying attention know what the government’s true agenda is.

Thursday, the mainstream media went crazy over that were allegedly racist.

The New York Times and other media outlets conveniently left out parts of video footage of Bundy talking about the government’s history of mistreatment of black and Mexican people and uses them as examples of how government oppresses people. His comments were spun to make him appear racist.

Here is the full, unedited version of Bundy’s commentary:

Today Bundy issued the following press release about the allegations of racism and what his comments meant:

What I am saying is that all we Americans are trading one form of slavery for another. All of us are in some measure slaves of the federal government. Through their oppressive tactics of telling the ranchers how many cows they can have on their land, and making that number too low to support a ranch, the BLM has driven every rancher in Clark County off the land, except me. The IRS keeps the people of America in fear, and makes us all work about a third or a half of the year before we have earned enough to pay their taxes. This is nothing but slavery from January through May. The NSA spies on us and collects our private phone calls and emails. And the government dole which many people in America are on, and have been for much of their lives, is dehumanizing and degrading. It takes away incentive to work and self respect. Eventually a person on the dole becomes a ward of the government, because his only source of income is a dole from the government. Once the government has you in that position, you are its slave.

I am trying to keep Martin Luther King Jr.’s dream alive. He was praying for the day when he and his people would be free, and he could say I’m free, free at last, thank God I’m free at last! But all of us here America, no matter our race, are having our freedom eroded and destroyed by the federal government because of its heavy handed tactics. The BLM, the IRS, the NSA–all of the federal agencies are destroying our freedom. I am standing up against their bad and unconstitutional laws, just like Rosa Parks did when she refused to sit in the back of the bus. She started a revolution in America, the civil rights movement, which freed the black people from much of the oppression they were suffering. I’m saying Martin Luther King’s dream was not that Rosa could take her rightful seat in the front of the bus, but his dream was that she could take any seat on the bus and I would be honored to sit beside her. I am doing the same thing Rosa Parks did–I am standing up against bad laws which dehumanize us and destroy our freedom. Just like the Minutemen at Lexington and Concord, we are saying no to an oppressive government which considers us to be slaves rather than free men.

I invite all people in America to join in our peaceful revolution to regain our freedom. That is how America was started, and we need to keep that tradition alive.

First Bundy had to defend his ranch – his family’s livelihood – from government tyrants, and now he has to defend himself from the distorted character assassination issued by the mainstream media.