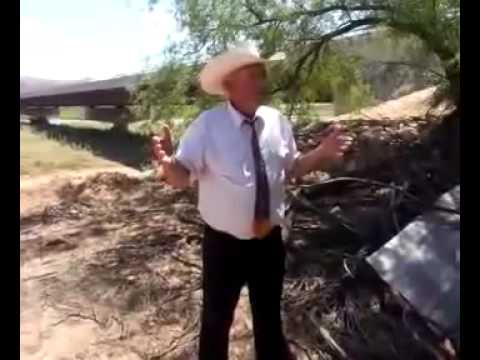 The New York Times decided to do a hit piece on Cliven Bundy and in doing so they used the usual tricks: They edited Bundy’s comments. Now the Nevada rancher is being smeared in the media as a racist due to the dishonorable coverage by the New York Times and others. So, in the spirit of fairness and truthfulness in media, here’s the complete unedited video remarks of Cliven Bundy, which don’t contain racist comments at all, but rather very pro-black and pro-Mexican comments. See for yourself.

Here is the full text of Bundy’s comments:

And because they were basically on government subsidy – so now what do they do? They abort their young children, they put their young men in jail, because they never, they never learned how to pick cotton. And I’ve often wondered are they were better off as slaves, picking cotton and having a family life and doing things? Or are they better off under government subsidy?

You know they didn’t get more freedom, uh they got less freedom – they got less family life, and their happiness -you could see it in their faces- they were not happy sitting on that concrete sidewalk. Down there they was probably growing their turnips – so that’s all government, that’s not freedom.

Now, let me talk about the Spanish people. You know I understand that they come over here against our constitution and cross our borders. But they’re here and they’re people – and I’ve worked side-by-side a lot of them.

And we need to have those people join us and be with us…. not, not come to our party.

In case you weren’t paying attention, the terms “negro” and “colored people” are not racist terms. Those with more melanin in their skin have throughout history referred to themselves as such. They certainly aren’t “African American.”

Bundy was merely pointing out the plight of black families in the US, something that our friend David Risselada has done countless times, including today in his excellent article.

His comments about Mexicans were not racist either, but rather pro-family.

Surely “conservatives” came to Bundy’s aid though, right? Not according to Conservative Treehouse. Sundance writes, “What’s more sad than the refusal to openly discuss the issues – is how quickly the conservative right is willing to throw Bundy to the wolves based solely on the New York Times and Media Matters opinion.”

Mr. Bundy’s comments are anything but racist, but this is how the progressives in this country operate. They pull sound bites in order to create a non-story, to inflame those who will never dig deeper than what they are given. At least in this article, you can make a fair judgment for yourself, and if you simply watch the entire comments of Cliven Bundy, you will never come to the conclusion that he is a racist.