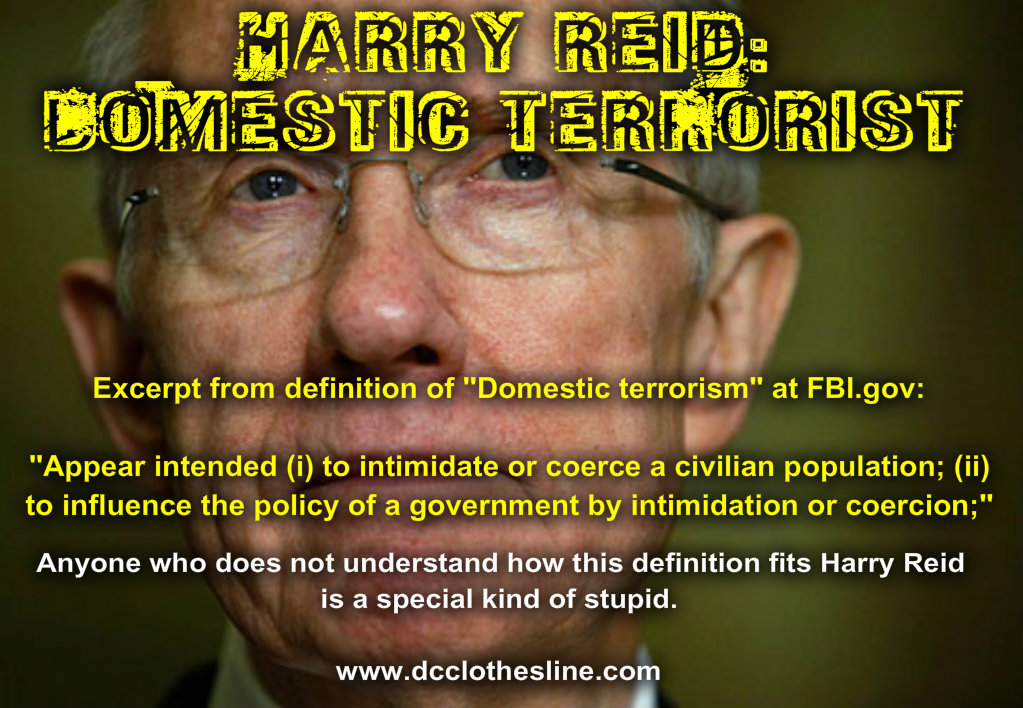 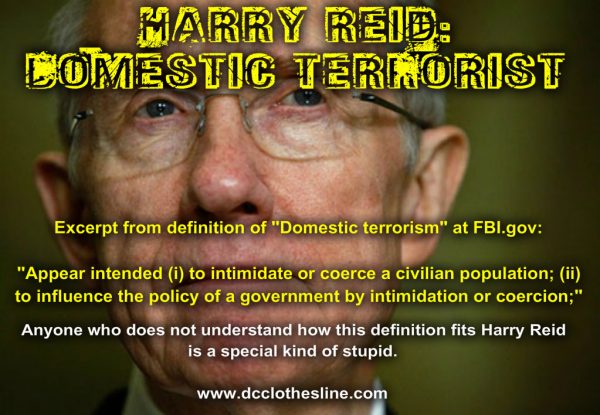 The (Less Than) Honorable Harry Reid522 Hart Senate Office BuildingWashington, D.C. 20510Senator Reid,In August of 2011, our Vice President Biden joined Representative Mike Doyle (D-PA) in calling us involved with the Tea Party movement as “Terrorists.” I have thought about that designation quite a bit since then. I wanted to thank you for your recent clarification of that charge when you announced to the world that those of us citizens you are supposed to represent are only “Domestic Terrorists.” I would really not want the world to think that We The People had joined forces with Al Qaeda. American ingenuity and the Second Amendment to our Constitution provide us with all the resources we need – Thank you very much.As I just said, since first being labeled as a “Terrorist” by this country’s “leaders” I have given the subject some considerable thought.  After careful consideration, I have reached the conclusion that you have a great deal in common with the rest of us “Domestic Terrorists.”Being a simple man, I prefer the simple definition of the word:Terrorist – A person who terrorizes or frightens others.
Yes, YOU most definitely qualify if not indeed personify the term.I worked on the Sharron Angle campaign in 2010; a campaign to which I am told you manipulated large donations amounting to a million dollars or more. That campaign was my baptism into Nevada Politics and I have never felt so soiled since the day I had to retrieve my dog from a Japanese “benjo ditch” (open roadside sewer system).Our neighborhood walkers were berated by recent immigrants over the lie that America has become. A recent immigrant from Eastern Europe raged over the fact that he could not vote for the candidate of his choice because his union bosses assured him that his vote could be tracked and that if he did not cast a vote for you he would lose his livelihood.  As Providence would have it, he worked for one of the casino companies for whom you arranged a bailout when Dubai pulled up stakes and left them hanging at the barely begun City Center project.And then there were those union members who were told that the casinos would stop their support of citizenship applications which would result in deportations if they did not vote for Harry Reid. The tales are endless and more disgusting with each iteration.Yes, Senator, I understand that We The People terrorize you and your felonious friends on both sides of the aisle. You live in terror of losing your power, position, and privilege. You live in terror that all your dirty laundry will be hung out for all to see and the inevitable pillory of you and your entire nest of freedom crushing and liberty sucking vipers will occur. Senator, that is inevitable; it is only a matter of time. But I do understand your terror. I have seen it in the eyes of other petty despots as their worlds imploded.On the other hand, YOU Sir are of the traditional type of Terrorist.  You hide in the shadows and manipulate others to do your bidding. You use your position of power and influence to intimidate people to comply or suffer the consequences. When We The People present that which terrorizes you the most, our unity – defended only by the American Flag and our Constitution, you arm your bureaucrats and hire mercenaries to deploy snipers against unarmed and defenseless old men, women, and children. At which point We The People provide the armed security.Yes, Senator, as One Domestic Terrorist to another I understand your terror, but somehow I feel that I am more comfortable with my form of terrorism than are you with yours. For although you may be unwilling to acknowledge the truth of history, despotism and tyranny, such as yours, will inevitably fall at the feet of the one ever enduring and insurmountable human power: The God Given love of freedom and soul deep need for liberty shared by all free men.