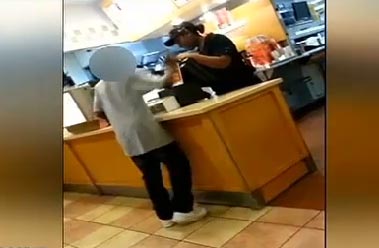 This…is…the world we live in.

A trendy new “game” is gaining popularity across the social media circuit. It’s lovingly called “Smack Cam”. If you don’t know what that is, let the blog Jezebel explain it to you:

Vines of boys hitting girls are instant #SmackCam hits; here’s a video of a guy violently slamming a girl on the head with heavy jug. She appears to be so stunned that she falls over.

You don’t need to wonder what your 8th grade sleepover parties would’ve been like if the grade’s Queen Bee had Vine; just check out these two videos. This school bus #SmackCam is like something out of a warped John Hughes movie.

Sure, some of the 1,000+ #SmackCam tweets are probably all in good fun — the inaugural #SmackCam was a joke between friends — but the ones I’ve seen remind me of Emily Bazelon’s definition of bullying: “physical or verbal abuse, repeated over time, and involving a power imbalance. In other words, it’s about one person with more social status lording it over another person, over and over again, to make him miserable.”

Sounds just awesome, doesn’t it? Some of the videos are jokes where everyone is in on it, but some aren’t at all.

As one commenter wrote after viewing:

No, not everyone is in on the “funny prank”. People like this 16-year-old Austin, Texas Wendy’s employee who was filmed being randomly slapped a couple days ago:

A male teen pretended he was going to order food and slapped the girl while his friend recorded and uploaded it pretty much right away.

These kids, who now face arrest and fines, are laughing it up in the video like it’s just hilarious to randomly hurt and humiliate people.

Spreaking of that, in February a Minnesota teen Jesse Smithers was sentenced to 10 years in prison for killing someone while playing the “knockout game,” another seemingly pointless, violent trend. This is when a group of people run up to an unsuspecting victim, totally unprovoked in every way, and just start beating him or her. Lots of people across the country have been hurt and even killed this way.

Smithers, who is just 18, delivered the deadly blow that killed a 20-year-old for no reason. He apologized in court during his sentencing, referring to his inane, murderous actions as “a complete accident”.

An accident? Really? Do these kids not even realize when they hit someone, it can actually hurt them?

Some will say this is all just “kids being kids,” but the overall tendency to random violence speaks to a bigger trend of not just a lack of basic respect for one another…but a lack of empathy.

Computers are raising our children. Most of them probably have more friends on social media websites than people they actually know in real life. Screens are disconnecting people of their basic sense of what it feels like to walk in another person’s shoes. The golden rule was thrown out the digital window a long, long time ago.

“Games” like this are just the prologue to a sad history the future will write. Society is lost.