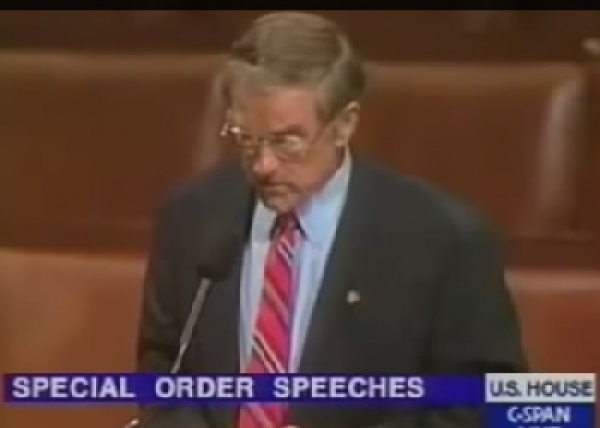 Then Congressman Ron Paul (R-TX) warned Congress and the American people against arming the Bureau of Land Management, the agency that surrounded the Bundy Ranch with more than 250 armed agents, including snipers a couple of weeks ago. Paul gave a passionate speech on the floor of the House in 1997 declaring the reasons that Americans fear a growing federal government, prompted by the Ruby Ridge and Waco attacks, as well as “many other episodes of an errant federal government.”

“Earlier this year, another member severely criticized me on the House floor for declaring on C-SPAN that, indeed, many Americans justifiably fear their own government,” Paul began. “This fear has come from the police state mentality that prompted Ruby Ridge, Waco and many other episodes of an errant federal government.”

“Under the Constitution, it was never meant to be a federal police force,” Paul continued. “Even and FBI (Federal Bureau of Investigation), limited only to investigations, was not accepted until this century. Yet, today, fueled by the federal government’s misdirected ‘war on drugs,’ radical environmentalism and the aggressive behavior of the ‘Nanny State,’ we have witnessed a massive buildup of a virtual army of armed regulators prowling the states where they have no authority. The sacrifice of individual responsibility and the concept of local government by majority of American citizens ha permitted the army of bureaucrats to thrive.”

Paul stated that the people had become “less vigilant” of their liberties due to their dependence upon government. Because of this, special interest groups would continue to advance a welfare state, which redistributes wealth in America.

“Wealth is limited,” Paul said, “but demands are unlimited. A welfare system inevitably diminishes production and shrinks the economic pie. As this occurs, anger among the competing special interests grows. While Congress and the people concentrate on material welfare and its equal redistribution, the principles of liberty are ignored and freedom is undermined.”

As the enforcement state grows, so do the need for a growing army of bureaucrats. Think if you will about the thousands of new Internal Revenue Service agents that are to be hired to enforce Obamacare. Yes, they are also being trained with semi-automatic rifles and handguns.

“Since groups demanding special favors from the federal government must abuse the rights and property of those who produce wealth and cherish liberty, real resentment is directed at the agents who come to eat out our substance; he natural consequences for the intruders to arm themselves to protect against angry victims of government intrusion” Paul said.

He then cited an article by Joseph Farah, then director of the Western Journalism Center of Sacramento, CA, which appeared in the Houston Chronicle.

“The surge in the number of armed Federal bureaucrats has been brought to our attention,” Paul paraphrased. “Farah points out that in 1996 alone, at least 2,439 new Federal cops were authorized to carry firearms. That takes the total up to nearly 60,000. Farah points out that these cops were not only in agencies like the FBI, but include the EPA, U.S. Fish and Wildlife, and the Army Corps of Engineers. Even Bruce Babbitt, according to Farah, wants to arm the Bureau of Land Management.”

Farah logically asked, “When will the NEA have its armed art cops?”

“It is ironic that the proliferation of guns in the hands of the bureaucrats is pushed by the antigun fanatics who hate the second amendment and would disarm every law-abiding American citizen,” the Texas Congressman continued. “Yes, we need gun control. We need to disarm our bureaucrats, then abolish the agencies. If government bureaucrats like guns that much, let them seek work with the NRA.”

Paul then warned, “Force and intimidation are the tools of tyrants. Intimidation with government guns, the threat of imprisonment, and the fear of harassment by government agents puts fear into the hearts of millions of Americans.”

As an example, he cited events of that time period under womanizer and adulterer-in-chief Bill Clinton. “Four days after Paula Jones refused a settlement in her celebrated suit, she received notice that she and her husband would be audited for 1995 taxes. Since 1994 is the current audit year for the IRS, the administration’s denial that the audit is related to the suit is suspect, to say the least. Even if it is coincidental, do not try to convince the American people. Most Americans, justifiably cynical and untrusting toward the Federal Government, know the evidence exists that since the 1970’s both Republican and Democratic administrations have not hesitated to intimidate their political enemies with IRS audits and regulatory harassment.”

“Even though the average IRS agent does not carry a gun, the threat of incarceration and seizure of property is backed up by many guns,” Paul concluded. “All government power is ultimately gun power and serves the interests of those who despise or do not comprehend the principles of liberty. The gun in the hands of law-abiding citizens serves to hold in check arrogant and aggressive government. Guns in the hands of the bureaucrats do the opposite. The founders of this country fully understood this fact.”

Well, we now have seen a massive amount of ammunition being solicited for by various federal agencies, from the Social Security Administration to various departments under the authority of Homeland Security to agencies such as DOC, NOAA, NMFS, OLE, and NED.
Even the postal service is in on the purchase of guns and ammo, while the IRS trains with AR-15s.

Ron Paul has been warning America for decades of its foolish decisions regarding monetary policy, foreign policy and yes, the growing tyrannical police state. I’d say the recent standoff, killing of cattle, violence against American citizens and armed federal agents building up in Nevada against the Bundys are validation that Paul has been right all along.