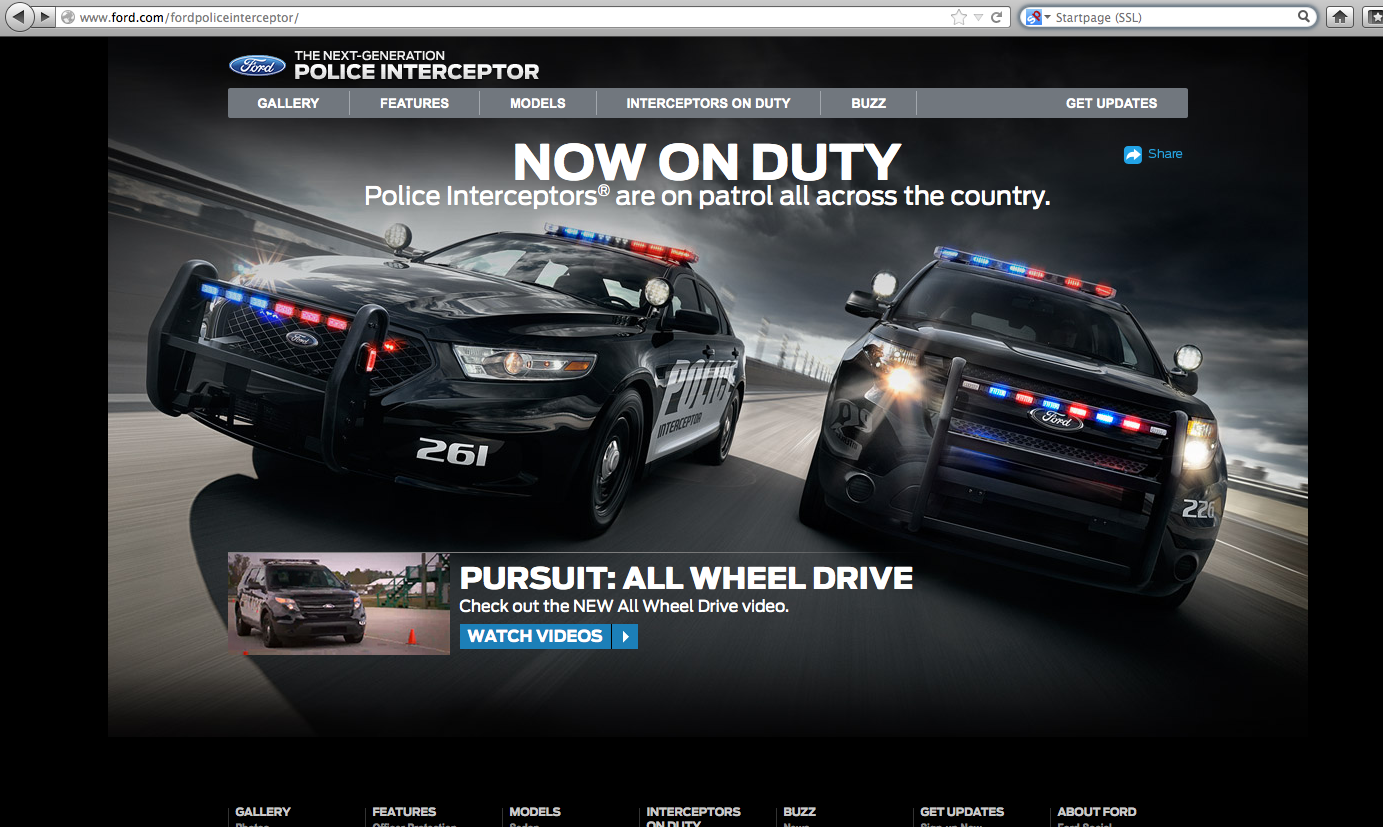 When a product used by the few to oppress the many is openly marketed it speaks to the level of control the few believe they have in the conversation. In this case – vehicles made by Ford only for use by police employees.

Currently a parasitic group of people claim the right to steal from another group of people who did nothing wrong, under the guise of “justice.” That same band of thieves also claims the ability to assign special rights to their friends, who associate under a fictitious entity called a corporation.

That perverse relationship – between those who rely on what Albert J. Nock called the political means and those who curry favor – are the rotten ingredients in the supply of what, only in an Orwellian world, can be deemed “protection.”

How do you feel when traveling and you see in your rearview mirror a road pirate? Thankful? Or apprehensive?

How do you refer to someone who shakes you down, despite the fact that your actions harmed no one else? Is that person an “authority”? What have they done to earn your authority? Might it be more accurate to use plain language – (i.e. a thief, or an aggressor) to describe such a person?

Consider the question posed in a Storm Clouds Gathering video: How would folks in Times Square react were Napolean Bonaparte to show up today and order them around? Clearly, no one is obligated to obey Bonaparte, just as none of us are obligated to obey any self-proclaimed ruler today. Fancy titles are just that – pomp.

It’s the ideas – the divisiveness and fear that these individuals and the statist quo draws its sustenance – that must be uprooted. If not, the paradigm that has Lenco Bearcats and MRAPs in small towns “just in case,” will become even more entrenched, and will set the stage for more institutionalized inequality. I’ve heard people vilify IBM for involvement with another criminal outfit in the 1940s. But I’ve not heard those same people decry Ford, for pandering to the police state apparatus by creating and marketing the Police Interceptor, though admittedly some do lambast companies like Navistar, BAE, International, General Dyanmics, and Oshkosh Corp., who together, made over 27,000 MRAPs.

Do you work at one of those places? Do you know someone who does? If “just doing my job” isn’t acceptable for someone wearing a police employee costume, it seems to me that’s just as true for anyone else.

The solution is simple. Withdraw your consent from that which you find distasteful. Stop calling 911, stop pledging allegiance, stop acting as a cog in the machine and allow its own friction to take course. Become more self-sustainable. Acquire goods and services needed and wanted via consensual interactions. Trust in yourself.

We’re getting there, one mind at a time. As Henry David Thoreau put-forth in 1849:

Pete Eyre is co-founder of CopBlock.org. As an advocate of peaceful, consensual interactions, Eyre seeks to inject a message of complete liberty and self-government into the conversation of police accountability. Eyre went to undergrad and grad school for law enforcement, then spent time in DC as an intern at the Cato Institute, a Koch Fellow at the Drug Policy Alliance, Directer of Campus Outreach at the Institute for Humane Studies, Crasher-in-Chief at Bureaucrash, and as a contractor for the Future of Freedom Foundation. He later hit the road as co-founder of the Motorhome Diaries and Liberty On Tour and now calls Keene, in the ‘shire his homebase.