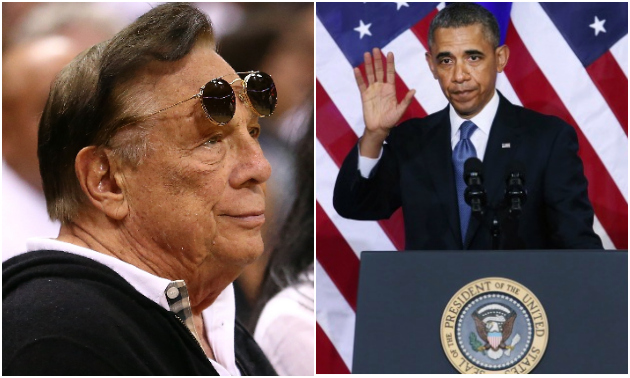 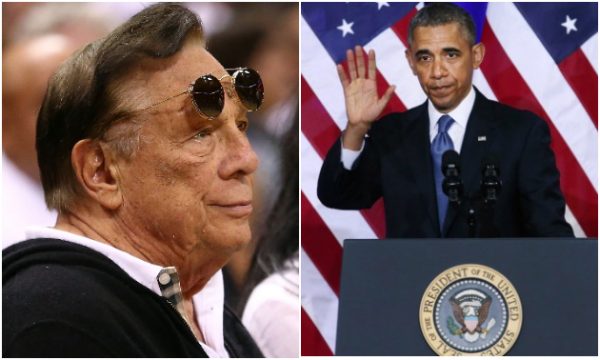 “All the evil in the world originates from the Jews and the Zionist barbarism.” – Hani Ramadan speaking before the Congress of the Union of Islamic Organizations (UOIF) last week in France.

And NOT a word of condemnation from Barack HUSSEIN Obama.

“Palestinians will not recognize Israel as a ‘Jewish’ state.” – Mahmoud Abbas‘ words last week to members of the Palestine Liberation Organization’s Central Committee.

And NOT a word of condemnation from Barack HUSSEIN Obama.

“You can sleep with them. You can bring them in, you can do whatever you want. The little I ask you is not to promote it on that… and not to bring them to my games.”– Supposedly said (at the time of this posting verification was still pending) by the NBA Clippers owner Donald Sterling to his ex-girlfriend V. Stiviano who is the defendant in a lawsuit brought by the Sterling family alleging that she embezzled more than $1.8 million, and who told Mr. Sterling that she would `get even.”‘.

“When ignorant folks want to advertise their ignorance, you don’t really have to do anything, you just let them talk.”…”Racial comments reportedly made by the owner of a pro basketball team are “ignorant” and “incredibly offensive.”…”The United States continues to wrestle with the legacy of race and slavery and segregation, that’s still there, the vestiges of discrimination.” Some of the many words said by Barack HUSSEIN Obama during a news conference while traveling in Malaysia where he discussed the Sterling incident.

An in your face double standard of words…or lack thereof…with echoes of embedded hate and rummages of anti-Semitism concerning truly important issues…words of true hate NOT addressed. Par for the course from the man who has set American race relations back a generation or more… from a man who sides with our ally Israel’s enemies…with the enemies of Jews and of all civilized men…every chance he gets.

And don’t get me wrong…the words spoken by Donald Sterling…if indeed proven true and NOT another Cliven Bundy altered, cut, splice, and paste job by the leftist media (The New York Times in Bundy’s case)…are indeed vile, bigoted, and hateful, and he should be called to task and dealt with according to the rules of the NBA.

However, what my problem is that here we have the President of the United States adding more fuel to the smoldering fires of still trying-to-heal racial wounds just like he did with his words, “If I had a son he would look like Trayvon Martin,” words said just six days after George Zimmerman was acquitted in the death of Martin. Words said at a time when the anti-Zimmerman/pro Martin rallies were dying down, anger was abating, and the oh so important to Obama photo-op interviews were tapering off. But then along he comes with words said just to stir the pot of racial discourse and to get his face back on camera yet again.

And now it’s happening once more as Barack HUSSEIN Obama, in his capacity as president, went to Malaysia to work on negotiations for a trans-Pacific trade accord, to discuss Malaysia’s civil liberties and human rights record, and to preside over a town-hall-style meeting with young people from around Southeast Asia NOT to embroil himself in a racial incident that has NOT yet proven to be true. But his words…from a half a world away…did get him his all-important press coverage here at home, did stir the ever simmering race-baiting pot again, and did allow both white and black ‘haters’ to chime in with their bigoted remarks…all before the words on the tape were proven to be that of Donald Sterling and NOT a set-up revenge attack by a woman accused of embezzling a large sum of money from his family.

Putting the cart before the horse as they say and done so for NO other reason than to cause trouble where trouble might possibly NOT exist. But even if those words were indeed uttered by Donald Sterling, the President of the United States needed to stay out of this as Sterling has a right to be a racist and to say what he thinks whether it’s perceived by some as hateful or NOT as the First Amendment gives him the right to say those words for they are NOT words that promote violence against the government nor against an individual.

And the point here is that as president, Obama should have immediately addressed the vile, hateful, vulgar words said by Hani Ramadan in Paris and by Mahmoud Abbas in the Gaza Strip. Why… because first, Ramadan’s words are words straight out of Adolph Hitler’s playbook and are contributing to the rise of anti-Semitism throughout the world and second, Abbas’ words mean that all the time, effort, and millions of US taxpayer dollars spent NOT only on the ‘anything but peace talks’ themselves but also on aid to the ‘so-called’ Palestinians have been for naught as Abbas’ words prove he NEVER had any intention of recognizing Israel as a Jewish state…a rightful must-have for any peace deal to be reached.

And where are Obama’s words as countless Christians throughout the Middle East and Africa are being murdered and slaughtered in mob violence committed by militant muslim groups. Their churches are bombed, their shops destroyed, and their homes looted as laws are being passed making them second-class citizens, thus forcing the majority of them to leave the countries of their birth. And NOT a word has crossed Obama’s lips even though he publicly claims to be a Christian but we know he is NOT. His infamous words “I will stand with the Muslims should the political winds shift in an ugly direction” have come back to haunt as this truth speaks volumes about his silence.

Bigotry is bigotry and hate is hate but there are and will always be degrees of both whether that is right or wrong. But deliberately stepping into the fray just to cause even more hate…even more discourse…just shows the true character of the man who has done more harm to the blacks in America…has done more harm to ‘We the People’ in general…than the likes of…thankfully unsuccessful…eugenics proponent Margret Sanger ever could.

And that is the saddest thing of all.