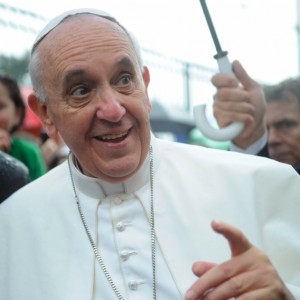 On Monday, the following message was posted on the Pope’s official Twitter account: “Inequality is the root of social evil.”  This follows on the heels of several other extremely harsh statements that he has made about capitalism over the past year.  The Pope appears to believe that inequality is one of the greatest evils that humanity is facing.  So if we redistributed all money and all property and made sure that everyone had an equal amount, would that wipe out social evil?  Of course not.  Such a notion is absolutely absurd.  Being the Pope, he should know that the evil that we see all around us is not the result of the distribution of wealth.  Rather, it is the result of humanity’s deep rebellion against God.  Yes, the fact that the wealth of the planet is being increasingly funneled to a very small minority at the top of the pyramid is a major problem.  This is something that I have written about repeatedly.  But the answer is not to make sure that everyone has the exact same amount of money and property.  In the end, that would only turn us into North Korea.

In case you missed it, here is the tweet by the Pope that is causing such an uproar…

Inequality is the root of social evil.

By itself, that statement could perhaps be “interpreted” a number of different ways.  But this follows other statements by the Pope that make it exceedingly clear what he is talking about.  Here is one example…

Just as the commandment “Thou shalt not kill” sets a clear limit in order to safeguard the value of human life, today we also have to say “Thou shalt not” to an economy of exclusion and inequality. Such an economy kills. How can it be that it is not a news item when an elderly homeless person dies of exposure, but it is news when the stock market loses two points? This is a case of exclusion. Can we continue to stand by when food is thrown away while people are starving? This is a case of inequality.

Yes, the Pope is correct to highlight the plight of the homeless and the needy.  Even in “wealthy America”, we have an epidemic of hunger.  This is something that I wrote about yesterday.

And yes, the Pope is correct to point out society’s obsession with the stock market.  Personally, I have been relentless in criticizing the big Wall Street banks.

But the solution is not to take everything away from everybody and put it into a giant pile and redistribute it equally.

History has shown us what happens when a society adopts an extreme form of socialism or communism.

Collectivism, socialism and communism are all close cousins.  People are promised that such systems will result in greater “equality”, but it never seems to actually work out that way.  Instead, the small elite that hold all the power usually end up enjoying the vast majority of the benefits.

And without a doubt, as the power of the government and the power of the corporations has increased, inequality has been rising.  Just check out the following chart from a new book by 42-year-old French economist Thomas Piketty entitled “Capital In The Twenty-First Century“… 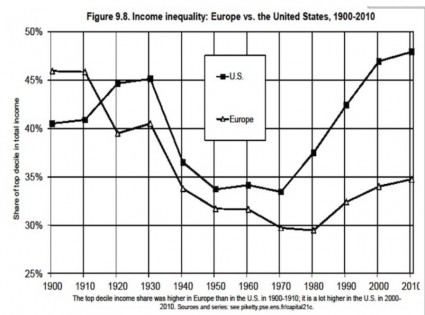 As I write this, Pinketty’s book is the number one seller on Amazon.  That is pretty remarkable for an economics treatise.  But Pinketty fails to realize what actually caused U.S. income inequality to start skyrocketing in 1971.  As Brian Domitrovic recently detailed, that was the year when the U.S. completely went off the gold standard and the Federal Reserve started running wild…

The big switch to the foundation of the American financial structure at the advent of this period was the U.S. decision in 1971 to go off the gold standard. Before that time, it was basically clear that outside of wartime (when gold-standard conventions were often suspended), you could basically count on the dollar holding its value against major things like the consumer price level, foreign currencies, and commodities such as gold itself.

After 1971, in contrast, it became basically clear that you could count on no such thing. The CPI might go up 125% in one decade (as it did 1971-1981), the dollar could permanently lose 66% against major currencies (as it did against the yen in this period), and commodities could shoot up ten-to twenty-five fold (as was the case with oil and gold).

Therefore a new day in financial planning also arrived. Suddenly the importance of simply saving money diminished. Money that was saved also had to be hedged. If you simply saved money after 1971, you stood to get killed as the dollar lost value against things it was supposed to be able to procure in the future.

This is where the financial services industry began its long march upward in the share of U.S. economic output it gobbled up. People who had significant money—the rich—threw their money into the products offered by the financial sector, in that the worst thing to happen to a fortune diligently built up over the years would be to see it frittered away on account of currency depreciation.

So much has gone wrong since 1971.  Out national debt has gotten more than 40 times larger, our economic infrastructure has been absolutely gutted and the value of the U.S. dollar has declined by well over 80 percent.

Once again, we need to go back to a system that much more closely resembles what our founders intended.

Did you know that the greatest period of economic growth in U.S. history was when there was no income tax, no IRS and no Federal Reserve?

We could have such a system again.

But the solutions being proposed by the mainstream media, our politicians and even the Pope involve even more centralization of economic power.

It is hard to describe the crushing poverty that exists in that hellhole of a country.  In North Korea, there is so little electricity that the country appears almost totally dark from space at night.  Just check out this picture taken by NASA… 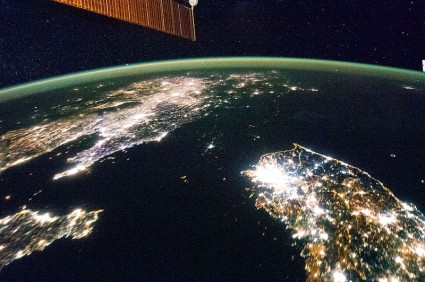 North Korea may have more “equality” than we do, buy in that country “a ballpoint pen is considered a luxury item“.  Here is much more on what life is like for ordinary people inside North Korea from the New York Post…

Jobs often come without salaries. Those who do get a paycheck, earn, on average, between $1,000-2,000 a year. Food and clothing are rationed by the government.

Most North Koreans have access to that one TV station and one newspaper, both state-run; they are told that their country is the only functioning and prosperous nation on Earth and that outside rages an apocalypse. Only elites are allowed cellphones, but they can just make calls or text — there is no Internet.

Would you like to live in such a society?

When you take away the incentive to work and the incentive to create, you end up with a much poorer society.  Without outside help, much of North Korea would have already starved to death by now…

“The majority of North Koreans believe completely in the regime,” says Barbara Demick, a Seoul-based journalist and author of “Nothing to Envy: Ordinary Lives in North Korea.”

“They are barely surviving,” she says. “Only the rich can afford to eat rice. They’re in a chronic state of food shortage.”

The average citizen eats twice a day — a manageable state of affairs for citizens who lived through the great famine of the ’90s, which reduced millions of people to eating tree bark and plucking undigested kernels of corn from animal excrement.

Yes, something needs to be done about the rising level of income inequality in our country.  The middle class is being systematically destroyed and most of our politicians do not seem to care.  Some big steps in that direction would be going back to a much purer form of capitalism, shutting down the Federal Reserve, changing laws to shift power much more in the direction of individuals and small businesses, and ending the practice of shipping millions of our good paying jobs to communist nations such as China.

We also need a massive shift in our culture.  We need to shift away from a culture of greed and selfishness to a culture of love, compassion and generosity.  Those that have been blessed have a responsibility to be a blessing.  That is something that we have largely forgotten.

But trying to use government and taxation to wipe out inequality never works and will only make society poorer.  This is a lesson that Barack Obama, the Democrats, the Republicans, the mainstream media and the Pope all desperately need to learn.