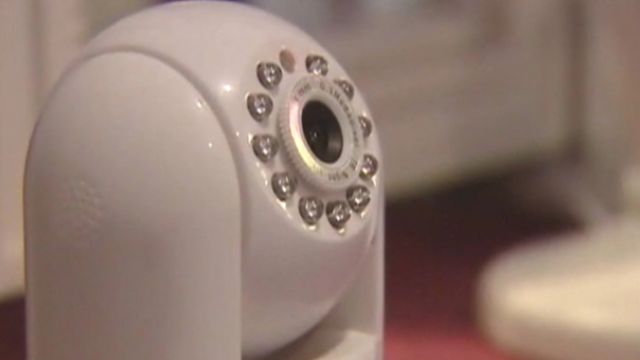 Imagine this happened to you.

You are fast asleep in the middle of the night, when suddenly you hear the voice of a strange man talking to your baby daughter… from inside her room.

You jump up and rush in there to find that, other than your infant sleeping in her crib, no one is there.

Then you hear him again, screaming, “Wake up, baby! Wake up!”

You focus on the source of the sound — your WI-FI baby monitor camera, which suddenly turns its lens on you without your prompt, so whoever has hacked it can scream obscenities at you in your own home in the middle of the night.

That’s what happened to one Cincinnati, Ohio couple just last week according to WBTV FOX19:

“Someone had hacked in from outside,” Heather said.

So how many other times had someone hacked into their camera and watched their baby through their Foscam IP Camera.

“You do kind of feel violated in a way,” Adam said.

According to tech experts, wireless IP cameras like the one the Shrieks have are an easy way for hackers to open a cyber door directly into your home.

“Any kind of Internet-connected device essentially could be subjected to this,” said Dave Hatter, a solutions expert for Infinity Partners.

And experts say once they get inside the camera in your home, hackers may also be able to get inside your lives.

They go on to recommend changing your password and making sure your software is up-to-date, but that’s it? Is that really going to make these parents feel safer about having a WI-FI, smartphone camera trained on their daughter?

The takeaway is, if you can use it to spy on your child, it can be used to spy on you. The same goes with all this “smart” technology.

Last fall, LG Electronics was caught sending data about its customers viewing habits on several of its “smart TV” models to a company in South Korea — even after one customer changed his privacy setting to “off,” supposedly disabling the TVs ability for “collection of watching info” in the options menu (it is a creepy enough sign of the times that this “option” comes standard anyway).

ABC News also released a list of the nine household appliances that might be spying on you: on your habits, on your usage, on the minutia of your daily life:

(They obviously miscounted, but still.)

And Back to the Future promised us hover boards…

Last Spring Wired reported that former CIA Director David Patraeus could hardly wait to spy on people through their appliances when he was discussing how this is all a part of the coming “Internet of Things” — a future where everything is technologically connected to everything else:

“Items of interest will be located, identified, monitored, and remotely controlled through technologies such as radio-frequency identification, sensor networks, tiny embedded servers, and energy harvesters — all connected to the next-generation internet using abundant, low-cost, and high-power computing,” Petraeus said, “the latter now going to cloud computing, in many areas greater and greater supercomputing, and, ultimately, heading to quantum computing.”

Petraeus allowed that these household spy devices “change our notions of secrecy” and prompt a rethink of “our notions of identity and secrecy.” All of which is true — if convenient for a CIA director.

Why do you think the NSA built a $3 billion data hub in the Utah desert?

We are living in an era of Big Data. It was a big talking point at last year’s Bilderberg Conference, after all. Periodicals like MIT Technology Review pose the question “Has Big Data Made Anonymity Impossible?,” which is essentially telling you we live in a ubiquitously monitored information age, so you might as well get used to it Jack.

With the smart grid being raised all around us, life is only going to get more tracked, more traced, more analyzed…and a lot less…private.

How much do you value your privacy these days? Do younger generations even know what privacy truly is anymore?

Well, in the new smart grid we’re all being assimilated into, you really aren’t meant to have any.

Our Brave New World will start in the now forthcoming brave new cities. Go ahead and take a look at your “smart” future: