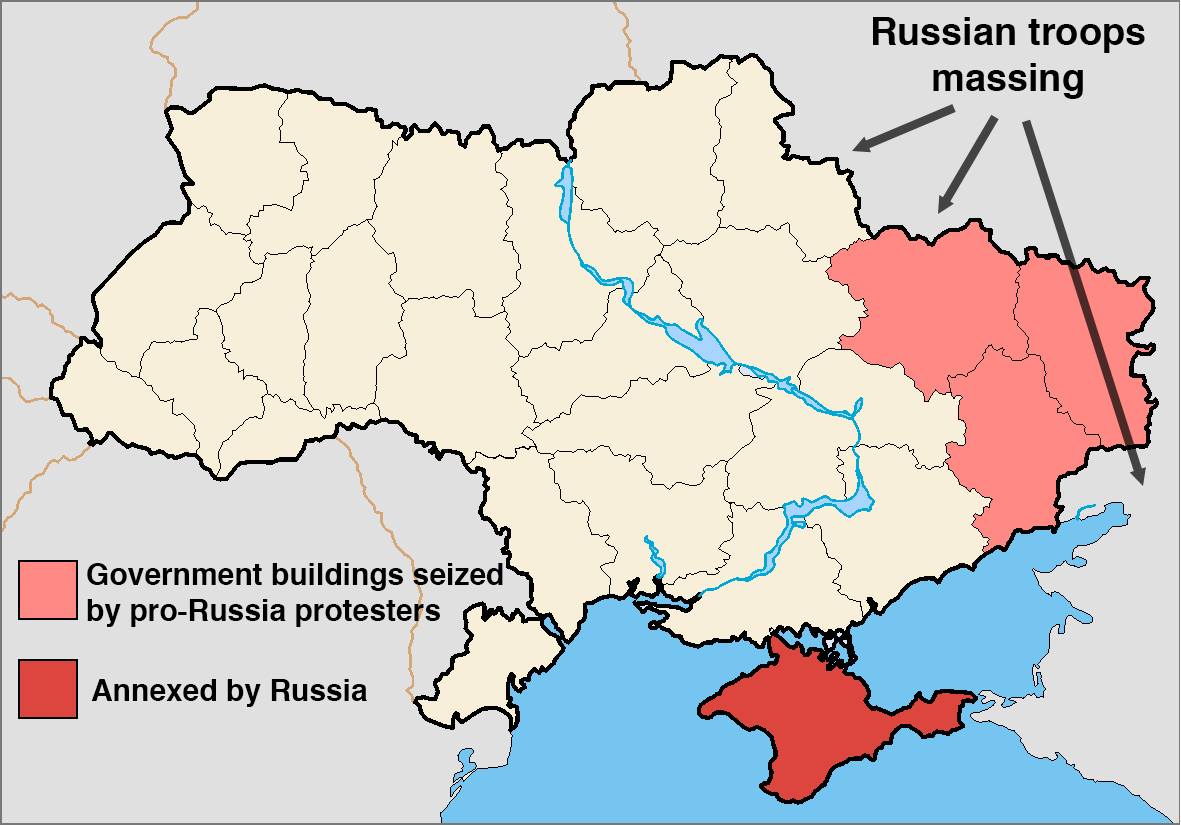 Military observers have suggested that the buildup of Russian troops on Ukraine’s eastern border is so large that it is either the most expensive military exercise in world history or Vladimir Putin is positioning his army for a massive invasion of the former Soviet state. On Monday the Israeli-based Debka File news agency reported that sources inside the U.S. Department of Defense strongly believe both countries are mobilizing military assets in anticipation of a first battle over the rebel-held flashpoint town of Slavyansk.

“The outcome will determine who controls the Donetsk region and possibly all of East Ukraine – the separatists or the provisional government in Kiev,” reports Debka. Given that Russia has one of the largest and well armed militaries in the world, the prospects of war don’t bode well for Ukraine. “With a superior, professional and well-trained force armed with a preponderance of fire power, the Kremlin has several options to choose from for this engagement,” none of which work in Ukraine’s favor.

While Washington is seemingly ignoring the possibility of an all out confrontation, time may be running short. Secretary of State John Kerry confirmed yesterday morning that U.S. intelligence agencies intercepted numerous communications between Moscow and pro-Russian separatist leaders who may be responsible for numerous shootings at military installations and government buildings over the last two weeks.

“Intel is producing taped conversations of intelligence operatives taking their orders from Moscow and everybody can tell the difference in the accents, in the idioms, in the language. We know exactly who’s giving those orders, we know where they are coming from,” Kerry said at a private meeting of the Tri Lateral Commission in Washington on Tuesday.

But the one indicator that Russia is not simply putting troops on the border for show is a report from St. Petersburg’s Rustlegraph news agency, which claims that the Russian Ministry of Defense has ordered medical brigades to be quickly assembled for deployment to the border.

According to the report, the brigades are now standing by at the Russian Military Medical Academy in Kirov, approximately 600 miles or about a 12 hour drive from the Ukrainian border.

By order of the Ministry of Defense in the Military Medical Academy in Kirov on the morning of April 25 were quickly formed military medical brigades. In team included military doctors of the number of officers and senior cadets WMA.

They announced that there is work in the Ukraine.

As confirmed by the “Telegraph” workers of the Academy, on the eve of April 24, at about 22:00 of the Ministry of Defense was ordered urgent formation of medical teams to send them to Ukraine.

At 5:00 am on April 25 physicians were alerted and arrived at the location with a disturbing set of VMA. Since then, the personnel of military medical teams are in the academy.

“Yes, sit and wait. But so far have not sent anyone anywhere, “- said the” Telegraph,” according to a source in the Naval Academy.

It is not clear if these units have already been deployed, but the report indicates that there is a high level of urgency associated with the request to assemble the brigades and prepare them specifically for a confrontation in the Ukraine.

Coupled with some 150,000 troops from Russia and Ukraine massing at the border, it looks as if the Russians may be preparing for an imminent strike and are now awaiting an order from President Vladimir Putin, who according to RussianNavyBlog has spent time consulting with his spiritual adviser over the last few days.

Information sourced, in part, via John Galt of the Shenandoah web site.