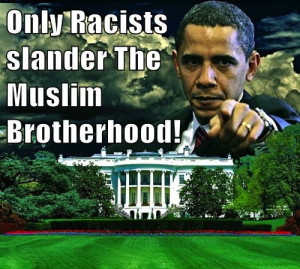 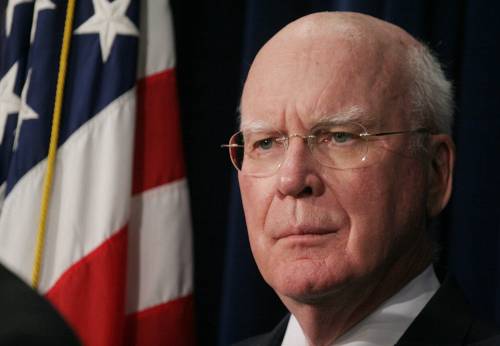 Senator Patrick Leahy (Democrat, Vermont) vowed on Tuesday to block $650 million in military aid that is earmarked for Egypt. That’s the good news. The bad news is that this is not a case of America tightening its belt or a sudden pandemic of common sense sweeping through the District of Columbia.

To the contrary it is a show of solidarity with the Muslim Brotherhood.

Yes America, your lawmakers really are this corrupt.

The judge, Said Youssef, said he was referring his ruling on the 683 death sentences for violence and the killing of policemen to the Grand Mufti, the top Islamic official — a requirement under Egyptian law, but one that is considered a formality.

Both mass trials are linked to deadly riots that erupted in Minya and elsewhere in Egypt after security forces violently disbanded sit-ins held by Brotherhood supporters in Cairo last August.

Among those convicted and sentenced to death on Monday was Mohamed Badie, the Brotherhood’s spiritual guide. If his sentence is confirmed, it would make him the most senior Brotherhood figure sentenced to death since one of the group’s leading ideologues, Sayed Qutb, was executed in 1966.

After the obvious disappointment suffered by our terrorist-supporting legislators on Monday, Leahy vowed Tuesday to block $650 million in aid to Egypt by using his power as Chair of the State and Foreign Operations Subcommittee. RT reports:

The statement made by the longest-serving US senator is another complication in Washington’s relationship with Cairo. Since the ouster last year of democratically-elected President Mohammed Morsi by the Egyptian military and allies, the Obama administration has walked a fine line between touting the democratic process while still ultimately maintaining strong allegiances with Egypt, a main ally in the region.

Last week, the Pentagon said it would send 10 Apache attack helicopters and $650 million to Egypt’s military regime, which has brutally suppressed dissent among Islamist supporters of Morsi and other groups. The Apaches do not need congressional approval, aides on Capitol Hill said, according to Reuters.

If we could believe Leahy’s argument then it would be a wonderful breath of fresh air emanating from the pungent halls of D.C.

However, if you want to get to the full hypocrisy of the situation, you need look no further than the actions (or lack of action) of fellow Democrat John Kerry in May, when $1.3 billion was sent to a Morsi-led, Pro-Brotherhood Egypt. We reported on this in June of 2013:

Americans are already livid that we sent F-16s and Abrams tanks to Egypt followed by $250 million in aid. Now we are sending another $1.3 billion? And you have not heard the worst part.

Secretary of State John Kerry took it upon himself to “waive” certain conditions that were supposed to be met in order to receive this aid. According to Breitbart:

According to laws governing the funds,  in order to give the $1.3 billion to Egypt, the Secretary of State had to certify that the Egyptian government“is supporting the transition to civilian government, including holding free and fair elections, implementing policies to protect freedom of expression, association and religion, and due process of law.”

But these restrictions can be–and apparently were–waived by the Sec. of State in this instance.

In a memo dated May 9, Kerry wrote: “A strong U.S. security partnership with Egypt, underpinned by Foreign Military Financing (FMF), maintains a channel to Egyptian military leadership, who are key opinion makers in the country.”

“A decision to waive restrictions on FMF to Egypt is necessary to uphold these interests as we encourage Egypt to continue its transition to democracy,” he explained.

Translation: Foreign relations with Egypt are vital so long as the Muslim Brotherhood is in power. We can bend a few rules in the spirit of democracy.

Had Leahy condemned John Kerry’s decisions of a year ago then it would have made his decision on Tuesday seem credible.

This is the hypocrisy that grows more obvious every day to those who really pay attention.

Back in September the bombshell to end all bombshell stories came out of Egypt and was quickly buried by American media. Al Jazeera reported that the Egyptian media was accusing  Kenya’s own Barack Obama of being more than a Muslim Brotherhood supporter. The Egyptian media was saying that Barack Obama was a full member of the Muslim Brotherhood. This is the same Al Jazeera that is a media darling of the left in this country. They are supposed to be a bastion of truth in the Arab world. But that only applies when it is convenient.

In America this story never existed it would seem. Stories only exist when they fit the approved agenda.

Siding with terrorists is the rule in Washington. You need look no further than Benghazi or Syria to understand that terrorists are our allies.

There is no justice for Coptic Christians who died under the previous regime and continue to suffer persecution and death in Egypt. That was not why Patrick Leahy vowed to block this funding.

No. Patrick Leahy, like many other sewer rats in D.C., is simply trying to “represent.”