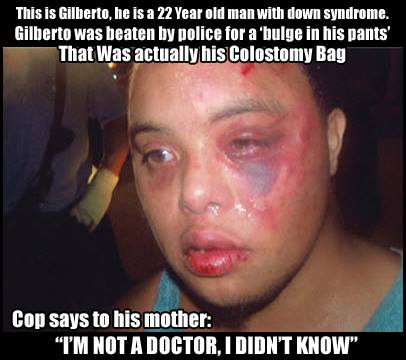 This is apparently what happens when a 22-year-old with down syndrome attempts to walk half a block home at 9:30 at night by himself in Miami-Dade, Florida:

Gilberto Powell says the police were following him in their cruiser as he was walking home. The police report says the officers decided to stop Gilberto after they noticed a “bulge” in Gilberto’s pants. After an officer tried to conduct a patdown, the report claims Gilberto attempted to flee.

Gilberto denies trying to run away and says he did everything the officer asked him to do. What happened next resulted in the photograph above.

After Powell was finally handcuffed and questioned, the officers realized he was “mentally challenged, was not capable of understanding our commands, and that the bulge in his waistband was a colostomy bag,” the report said. (source)

By that time, Gilberto had been hit, knocked to the ground and the bag had reportedly been ripped from his body. The father says by the time he and Gilberto’s mother ran outside to their son, the cops had removed Gilberto’s pants and had him out there in his boxer shorts.

The mother asked the officer, “Didn’t you know he was a Down Syndrome kid?” to which the cop responded, “I’m not a doctor, I didn’t know.”

The family’s attorney Philip Gold said that it should’ve been immediately obvious that Gilberto has special needs:

If you just look at Gilberto, he 5-foot-3, 130 pounds with Down Syndrome, it’s 100 percent obvious he has Down Syndrome,” he said. It’s impossible to believe [the police’s story] if you hear one word out of Gilberto’s mouth.” (source)

The case in currently under investigation. The family wants an apology.

Hail To The Thief
January 21st, 2021 Sons of Liberty Media

Former DNI John Ratcliffe confirms that China, not Russia, had a...