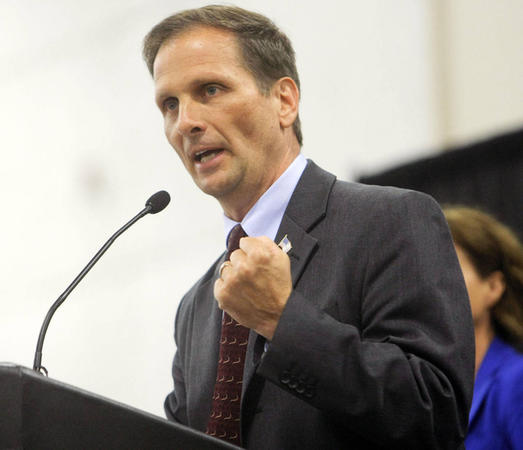 Republican Utah Congressman Chris Stewart, in referencing the standoff at the Bundy Ranch, said that the Bureau of Land Management does not need a heavily armed police force. In the light of what has taken place in the past couple of weeks, Stewart, a member of the House Appropriations Committee and freshman congressman, says that he will
make an effort to cut funding for “paramilitary units” in the BLM, Internal Revenue Service and other federal agencies. He will also require these agencies to work with local law enforcement, instead of bringing in their own armed troops.

“There are lots of people who are really concerned when the BLM shows up with its own SWAT team,” Stewart said. “They’re regulatory agencies; they’re not paramilitary units, and I think that concerns a lot of us.”

Stewart, who insists he isn’t taking sides in the Bundy showdown, says he was shocked to see the government’s response and believes it led to the civilian militia that showed up to defend the rancher. But Stewart says agencies such as the BLM should defer to local police for muscle instead of bringing in their own.

“They should do what anyone else would do,” Stewart said. “Call the local sheriff, who has the capability to intervene in situations like that.”

Stewart, a freshman lawmaker seeking a second term this election year, could find powerful friends in his targeting of such special-force units in government agencies. Sen. Rand Paul, R-Ky., told WHAS radio of Louisville, that the feds shouldn’t have “48 federal agencies carrying weapons and having SWAT teams.”

The Interior Department stressed Tuesday that the BLM and National Park Service had law enforcement personnel present during the Bundy cattle roundup to provide safety for their employees and the public.

Interior Department Spokeswoman Jessica Kershaw said that that the BLM does not have SWAT or tactical teams and that the agency does work with local law enforcement due to the fact that they have about 300 officers in their agency who provide support to 245 million acres of public land.

“Partnerships and coordination with local law enforcement are a key part of the equation, not just because it’s good government, but because of the need to leverage limited resources.”

“It’s certainly worth something to examine, but we come up against the old adage: Be careful what you wish for,” said Pat Shea, who oversaw the BLM under Bill Clinton, of Stewart’s plan. “Besides the military, we could end up with a national police force. That could make black helicopters look like biplanes.”

Militias rolled out from across the country as the feds brought in hundreds of armed agents and snipers against the Bundys and protesters. Hundreds of Oath Keepers also made the journey to Bunkerville when called upon. The result was that the BLM pulled back, though many believe that is only temporary.

A no-fly zone remains in effect until May 11, and there have been reports by Oath Keepers founder Stewart Rhodes of alleged drone strikes on the ranch. Those reports have yet to materialize so far.

One thing if for sure. There is absolutely no need for the federal government to bring armed agents in against US citizens in the manner they did at the Bundy Ranch. If the man actually has committed a crime, then charge him and take him to court for it. Otherwise, leave him alone. So far, all court proceedings have been administrative, not judicial. Sources say the reason for that is that the BLM believes Bundy may actually have prescriptive rights, something that would leave the BLM without a case against Bundy.

We can hope that the people of the United States and our representatives would wake up, especially in light of us pointing out that former Texas Congressman Ron Paul warned about this kind of thing, specifically pointing out arming the BLM, nearly two decades ago. My guess is that big government won’t want to let go of its guns; they’ll just want to continue their march against ours.

Congressman Stewart is also up for re-election in 2014.