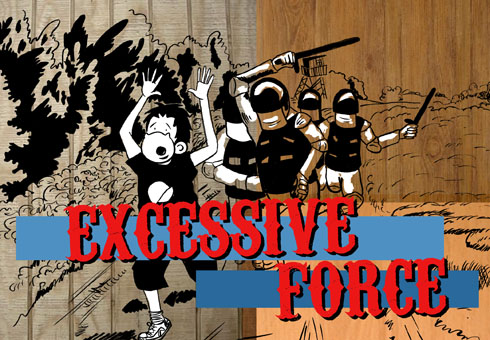 Despite cameras aimed, cops are getting more and more comfortable beating the already handcuffed with reckless abandon – if not simply shooting them because “we don’t have time for this.“Apparently, getting lunging knee-kicks and punches to the head constitutes resisting arrest. His exasperated cries are subdued by the beating but it doesn’t stop there as more cops join the party and descend. It is difficult to imagine a more helpless situation. A story of what happened to 23-year-old John Willet follows. According to an upload by Copblock of WNY, Willet of Buffalo, New York noticed he was being closely followed the night of April 19th, in the area of Philadelphia and Ontario streets, so he sped up but was then pulled over by the unmarked police vehicle.

He ran from the parked car across the street where he willingly surrendered. With hands in the air, he was allegedly punched and thrown to the ground. Video footage starts showing most of the rest. The end is most startling as it shows completely gratuitous punching to the head. Of course, any beating is unnecessary for a stopped person who has surrendered, let alone face down with hands behind the back in handcuffs. Under arrest is under arrest. Although for what originally? Handcuff and beat first, find something later…Willet was charged with resisting arrest and minor(?) drug possession.According to this Copblock chapter:

This video has been sent to Buffalo Police and Mayor Byron Brown. Police Commissioner Daniel Derenda ordered an internal affairs investigation into the incident and all the police officers involved have been suspended for the duration of the investigation. Commissioner Derenda and Mayor Brown both said that they will not tolerate any misconduct or criminal activities involving police officers. We are currently waiting for the result of the internal investigation.

According to The Free Thought Project:

Local attorney John Elmore watched the video and says police can use whatever force is necessary if a suspect resists arrest. But Elmore also says excessive force was used once Willet was placed under arrest.