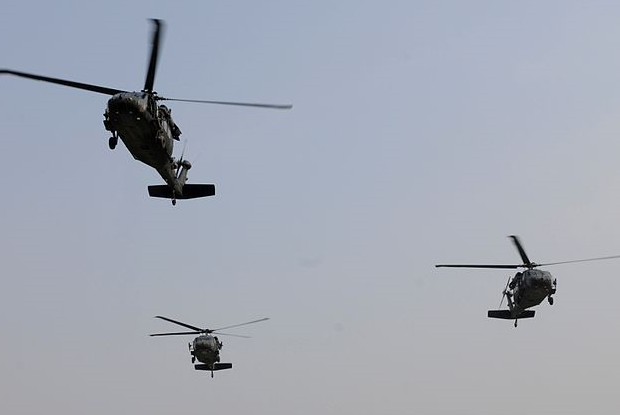 “Black-ops” helicopters with their lights turned off buzzed Kentucky and Cincinnati residents last night as part of an unannounced military drill, with one eyewitness telling Infowars the maneuvers resembled something out of a “war zone”.

The news station confirmed with Boone County dispatch center there were indeed “black ops” helicopters flying over northern Kentucky and the Greater Cincinnati area and that they were part of an exercise out of Fort Campbell which was using Lunken Airport as a base.Under the headline, Yes, Those were ‘Black Ops’ helicopters over Florence, 700WLW News reports, “Several callers to the 700 WLW news room overnight said that there were “black ops” helicopters flying over the Florence area. Our news partners at Fox 19 said they received calls as well. Callers said that they spotted at least two choppers, and they were running without lights.”

“The Army said it had coordinated the exercise with appropriate leaders,” states the report, although there was no indication that citizens were told in advance of the drill. The purpose of the exercises was also withheld. The Army also claimed that, “the safety of the personnel and the public was maintained,” despite the fact that the choppers’ lights were turned off.

An Infowars reader and a Florence resident emailed to inform us that he was suddenly awoken at midnight by the exercises.

“I woke and looked but could not see a thing. I knew the sound because of the deep whip and vibration. No lights or indicators were on to view the presence. Two pass overs and maneuvering you would expect in a war zone,” he stated, adding, “What is this government thinking?”

Although the term “black helicopters” is used as a pejorative slur by the mainstream media, such aircraft are often a part of unannounced military drills over metropolitan areas which have stoked concerns that Americans are being pacified into accepting martial law-style activities as routine.

In 2012, Miami residents were shocked to be awoken by a military exercise in the middle of the night which involved helicopters, fighter jets, along with simulated gunfire and grenades. Black Hawk helicopters also flew low over Los Angeles during a military drill the same year.

Back in March, we reported on Department of Defense exercises in Broward County during which low flying military helicopters landed on city buildings in Fort Lauderdale. According to a local reporter, the drills were centered around, “scaring the crap out of people”.