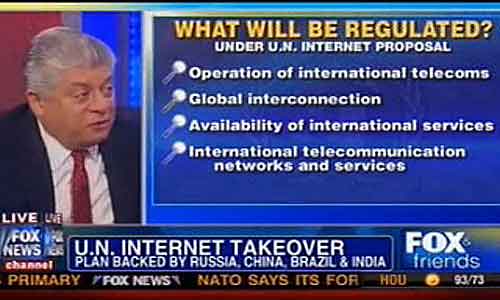 Much has been made about the Obama administration’s plan to willingly forfeit control of the organization (ICANN) that administers the Internet is fueling justifiable concerns that the United nations will be controlling the Internet. Thanks to some creative, home-grown journalism, it now appears that these claims by Fox News are indeed true.

What most of us have heard is that Obama has handed off control of the Internet to the United Nations and the alternative media will soon become extinct because it will be regulated out of existence. It turns out that this is true and massive nature of the conspiracy designed for corporations to seize control of the Internet are true.

In the paragraphs below, the investigative exploits of an obscure researcher reveal the depth of this conspiracy.

An innovative activist and researcher, who refers to himself as only “4409″ recently ventured into the Phoenix Convention Center to investigate the Identity Ecosystem Steering Group which is trying to create a blueprint to control access the Internet. Subsequently, “4409″ discovered that big money is behind a coming government program designed to make it mandatory that for you and I to use the internet, we must submit to using a biometric online identification tool.

4409 further discovered that one of the convention rooms was reserved for online liability insurance program. Companies which were lining up to see how they could make money by offering liability insurance to people with biometric online Identifications. This begs the question as to whether this biometric online ID poses a potential physical danger to the user? Why else would one need this type of insurance?

4409 also discovered that there were rooms that said “policy,” “finance,” “privacy”  and “implementation.” 4409 did not detail the scope of the entities which are behind this online biometric ID program.  However, he did reveal the fact that this massive meeting between these multiple entities was not merely a brainstorming session. These entities are conspiring to control the Internet and ultimately to control you.

4409 does not lack in courage or resourcefulness. However, his investigation was cut short as he was harassed by security. Therefore, he was only able to shoot a little footage. However, the footage he did shoot, was revealing. I would advise the reader to take the time to view the following short video. There is some very disturbing information contained in the video but the production is humorous and entertaining.

A Massive Conspiracy to Seize Control of the Internet

What went unnoticed in 4409′s report was the number of involved government agencies involved in this endeavor. A very large number of very influential universities also played an active role in this conference. And there was massive representation of the corporate community which included some of the most recognizable names in the world. The sheer size and scope of the entities meeting on this topic at one time reminds me of the early days of the development and implementation of global warming policies held in Kyoto, Japan with the one major difference being that with the biometric online ID conference there was far less controversy than the early days of the global warming meetings and there seems to be a lot more consensus on a course of action. It would appear that the globalists are becoming much more efficient in their implementation of controversial policies.

It is clear that these various groups were meeting together for two reasons. First, they are conspiring to separate you from as much of your money as possible in order to use the Internet. Second, they are conspiring to control your access to economic and political information in much the same manner as has the corporate controlled media has engaged in over the past several decades.

A Cross-Section of Federal Agencies In Attendance

A Cross-Section of State and Local Governments In Attendance

A number of city and state governments were represented as well and a few of these included the City of Las Vegas, Boston, Commonwealth of Kentucky, the Commonwealth of Virginia – Department of Motor Vehicles (can you say Agenda 21 and the Vehicle Mileage Tax for the miles you drive your car?), the State of Michigan, the State of Nevada and the Georgia Technology Authority.

A Cross-Section of Highly Reputable Universities In Attendance

A Cross-Section of Corporate Entities In Attendance The excuses to enact this draconian system are endless. “You have too many passwords to remember. Future hackers will get smarter and be able to trick computer systems into thinking that they are, in fact, the legitimate user logging in. It will be safer for children to access the internet because the people with whom they have contact with will be known…”

Will the technologies of biometric identification solve these aforementioned issues in the future?  Probably. However, you better be prepared to use your unique fingerprints, retinal scans  and voice prints to access the Internet. The technology associated with Biometric identification will sell the program to the public because people will be freed from our key chains, allowing the public to enter their homes, cars, safes, and other secure locations with the scan of a fingerprint or retina. This is no longer the fictional stuff of Star Trek fantasies. This technology is right here, right now, and it is soon going to be unleashed against an unsuspecting public. There are several downsides to this so-called freedom movement associated with increased control over the Internet. What you now get for free you will soon be paying an access fee. Your online ID will come with a price and you will undoubtedly be taxed on your internet usage. Additionally, the government will have access to everything about you and in some futuristic totalitarian regime, like the police state grid (NDAA) that is presently being installed in America, this could proved potentially lethal.

The world is being incrementally moved to the point of accepting the widespread use of various biometric ID applications. Countries around the world are already requiring biometric identification authentication for passports, identification cards, and in banking systems (e.g. Japan, United States, Germany, Australia, Israel, Iraq, Nigeria and Brazil). There is a nexus point coming with the ultimate merging on all of these biometric schemes and it is becoming abundantly clear that the sum total will add up to the enslavement of humanity because soon you will be tagged and bagged like a FedEx package in route to its final destination. Very soon, the words “nowhere to run and nowhere to hide” will carry a very dire meaning.

The one thing that everyone can count on, given the presence of the top corporations of the world at this conference in Phoenix, is that we will be paying a proverbial arm and a leg to use what was once free. And with the presence of watchdog agencies such as the NSA, DHS, etc., we can bet that our  few remaining civil liberties will fade very quickly into the night. This is beyond 1984.

The implementation of a biometric ID is a frightening proposition. It is not a long leap from biometric ID’s to human chipping. And on that note, I leave you with these thoughts: A Christian Perspective of Biometric ID’s

Revelation 13:15-18 states: “And he causeth all, both small and great, rich and poor, free and bond, to receive a mark in their right hand, or in their foreheads: And that no man might buy or sell, save he that had the mark, OR the name of the beast, or the number of his name … and his number is six hundred threescore and six.”

A Libertarian/Constitutional View of Biometric ID’s

This is a gross intrusion into American civil liberties. The government is conducting unwarranted searches and seizures of our bodies and our private possessions/documents. This is wholly illegal and unconstitutional and must be opposed by any means necessary.

What has been presented here is just the tip of the iceberg as to what the globalists have planned with regard to the use of biometric ID’s. If the plot for the United Nations to control the Internet was not bad enough, we are now learning that the United Nations desires to use this technology for some very frightening possibilities.