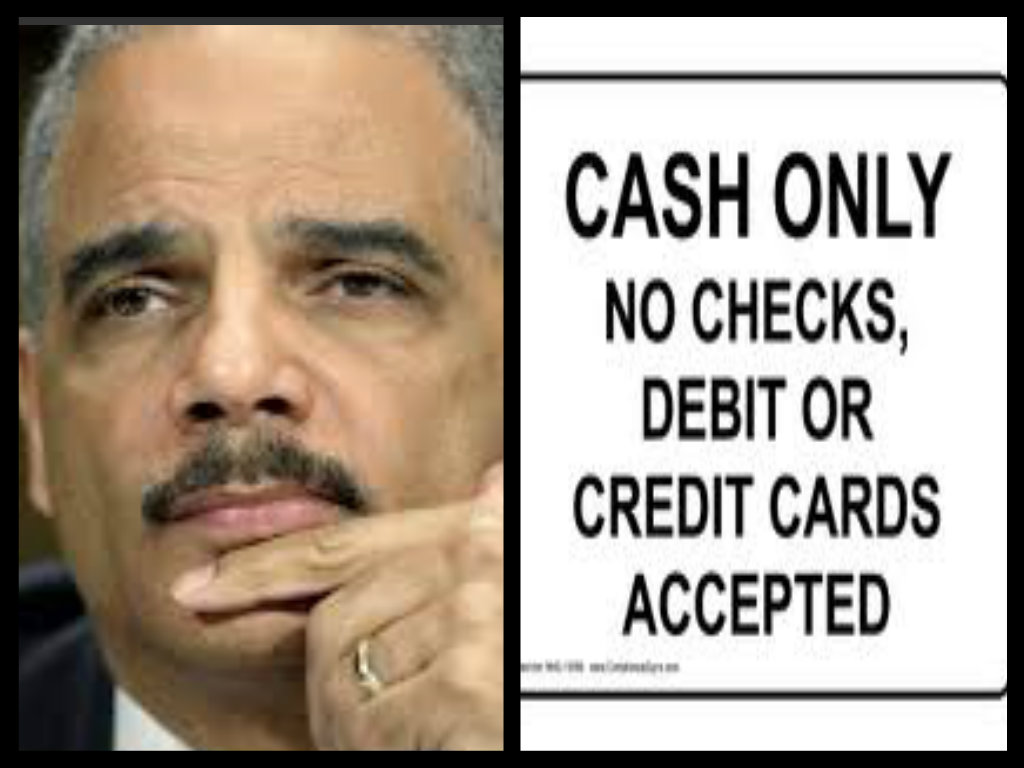 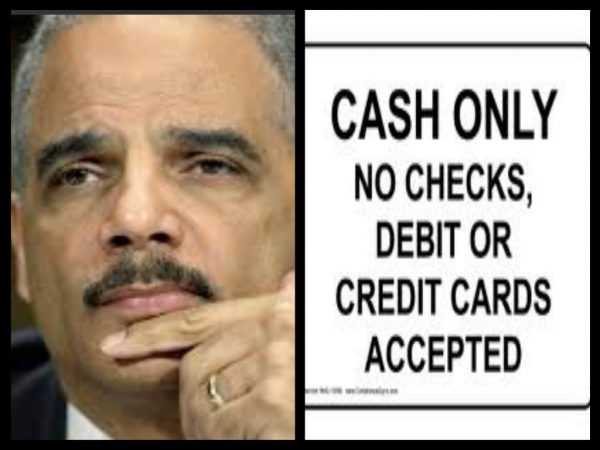 The current criminal Attorney General, who has been found to be in contempt of Congress after failing to provide subpoenaed documents in the Fast and Furious scandal, which his department was involved in trafficking thousands of guns across the US/Mexico border that resulted in the deaths of hundreds of Mexicans and at least two federal agents, has now been caught in yet another scandal. For the past several months, the DOJ has been putting pressure on banks, in a program referred to as Operation ChokePoint, to not provide services that the Justice Department is targeting politically. Among those businesses are gun stores.

The DOJ has been targeting several businesses besides gun stores. They include pornography distributors and actresses, sellers of drug paraphernalia and dating services.

According to a 2011 Federal Deposit Insurance Corporation bulletin, which lists “merchant categories that have been associated with high-risk activity” involving “disreputable merchants,” it appears that the DOJ is attempting to malign legal gun stores, as well as other businesses. The bulletin, in essence, seeks to put these businesses in the category of “Ponzi schemes,” “get rich products” and “high risk” activities.

In 2012, the Daily Caller reported that Bank of America told McMillan Fiberglass Stocks, McMillan Firearms Manufacturing and McMillan Group International that they would no longer be doing business with them after being their banker for 12 years.

Michael Piccione recounted Operations director Kelly McMillan’s Facebook post regarding a meeting he with Ray Fox, a business banking Senior Vice President at Bank of America. While the meeting was supposed to be an “account analysis” meeting, it quickly became, in the words of Piccione, “a political smackdown.”

The Bank of America emissary, he said, “spent 5 minutes talking about how McMillan has changed in the last 5 years and have become more of a firearms manufacturer than a supplier of accessories.”

“At this point I interrupted him,” McMillan said, and asked, ‘Can I possibly save you some time so that you don’t waste your breath? What you are going to tell me is that because we are in the firearms manufacturing business you no longer what my business.'”

Fox’s reply, according to McMillan? “That is correct.”

McMillan told TheDC that he plans to move his company’s account to “a more Second Amendment-friendly bank” as soon as it can be done.

He recalls telling the bank executive that he planned to tell the National Rifle Association, Safari Club International, and his other gun-loving friends “that Bank of America is not firearms-industry-friendly.”

“You have to do what you must” was Fox’s reply, he said. “We have to assess the risk of doing business with a firearms related industry.”

While Bank of America may have won a battle, the McMillan Group was considering not accepting BOA credit cards for purchases.

Bank of America is not the only business to engage in this type of activity via the politics of the Obama DOJ. In March 2014, BitPay, a US-based bitcoin processor, also refused to do business with Central Texas Gunworks owner Michael Cargill.

Also in March, the Miami New Times reported that BankUnited informed a Florida couple that their checking account was being closed due to their gun store. For years the couple never had a problem, until T. R. Liberti decided to retire and let his wife, Elizabeth, operate the store online under the name Discount Ammo-N-Guns. That’s when the couple received a letter from the bank informing them that their account was being closed “pursuant to the terms and conditions listed in our Depositor’s Agreement.”

Though they contacted the bank for an explanation, they were told that none would be forthcoming. They also had three days to arrange for the cash in the account to be transferred.

“I was very angry,” Elizabeth says. “They were very inconsiderate. We had all our credit cards going through that bank. All of a sudden, we had to run and find another bank to keep our business going. We shut down for two weeks, and they wouldn’t even tell us why.”

The Times went on to report:

After a day of dialing different BankUnited divisions and directors, the Libertis finally found out.

“This letter in no way reflects any derogatory reasons for such action on your behalf. But rather one of industry,” wrote Coral Way branch manager Ricardo Garcia. “Unfortunately your company’s line of business is not commensurate with the industries we work with.”

BankUnited refused to explain the email to New Times, saying only, “We cannot discuss a customer’s account.”

But T.R. Liberti says the once-local bank has taken a turn toward anti-gun policies since it was bought by New York investors during the financial crisis.

“They have that [former New York mayor Michael] Bloomberg attitude of guns are bad and anyone who has a gun is bad. You know the lot,” he says. “That’s cute, because Bloomberg has four bodyguards, and they all carry guns. You don’t have that when you are broken down on Biscayne Boulevard at 3 in the morning.”

The Liberti’s are considering a lawsuit.

Jason Oxman, the CEO of the Electronic Transactions Association, which represents more than 500 payments and technology companies, wrote at The Hill about operation Chokepoint:

The “chokepoint” in this operation is the nation’s payments infrastructure, the means by which merchants process nearly $5 trillion in consumer purchases in the U.S. each year.  Federal law enforcers are targeting merchant categories like payday lenders, ammunition and tobacco sales, and telemarketers – but not merely by pursuing those merchants directly.  Rather, Operation Chokepoint is flooding payments companies that provide processing service to those industries with subpoenas, civil investigative demands, and other burdensome and costly legal demands.

The theory behind this enforcement program has superficial logic: increase the legal and compliance costs of serving certain disfavored merchant categories, and payments companies will simply stop providing service to such merchants.  And it’s working – payments companies across the country are cutting off service to categories of merchants that – although providing a legal service – are creating the potential for significant financial and reputational harm as law enforcement publicizes its activities.  Thus far, payday lenders have been the most frequent target.  Whatever the merits of payday lending – and there are valid arguments on both sides –it is legal in 36 states.  And if payday lenders are today’s target– what category will be next and who makes that decision?

Not only are these Marxist policies being put into place in order to attack the gun industry, and as a workaround to attacking the Second Amendment, but they end up attacking the very economy that this administration claims to be fixing. We all know that is a lie. They aren’t attempting to fix anything. This is the Alinsky method of creating discontent. What’s going on is criminal behavior from an ironically named “Justice Department” to advance an agenda, and it isn’t a pro-American agenda that is the goal.