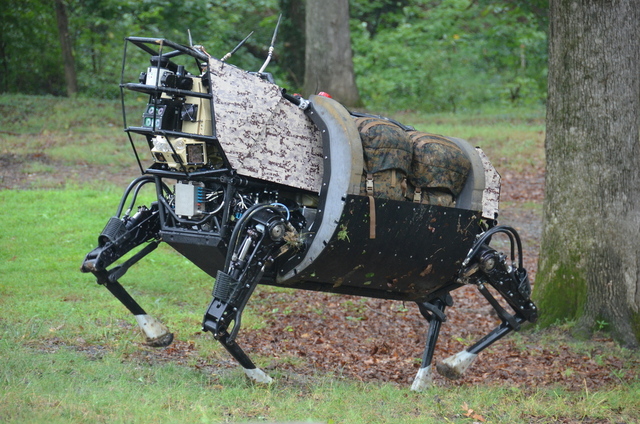 Are these robots the servants of man, or will they become the main enemy of mankind?

Who was Gene Roddenberry? What insider information did he have almost 50 years ago? Gene Roddenberry’s production, Star Trek, demonstrated that there is a fine line between science fiction and science fact. Was he an insider armed with information as to what was coming? Was he part of a desensitization program designed to acclimate humanity to the technology possessed by the NWO? Is the following technology designed to enhance or to enslave humanity?

Who could forget the omnipresent tricorder, designed to ascertain, among other things, one’s health status? Today, we have portable and wireless medical imaging devices. Do you remember the Star Trek’s communication device? Compare this to a modern day cell phone. Moving along in movie history, there is no movie that marked the advent of the creation of autonomous robots more than the movie which created the following killer robot. Take a look at this killer robot which first appeared in the movie, Terminator. Compare science fiction with DARPA’s science fact as killer robots have been unveiled.

The use of drones to kill suspected terrorists is controversial, but so long as a human being decides whether to fire the missile, it is not a radical shift in how humanity wages war. —Since David killed Goliath, warring armies have sought ways to more effectively kill their enemies while protecting their troops.

However, a new innovation has come to the battlefield which is unparalleled in the art of war. It strongly appears that DARPA developed military robots have the capacity to identify and to attack enemy soldiers on the battlefield and decide on their own whether to go for the kill. Do the DARPA killer robots possess the capacity to hunt down a human being? View the following for the unquestionable answer to this question.

In 2010, an Air Force report speculated that with increased robot capabilities, the human soldier will be obsolete. The Defense Department road map for killer robot systems states that its final goal is the unsupervised ability for (killer robots) mechanical assets to carry out their specified missions. In other words, the world will witness entire units of killer robots carrying out their missions without any human oversight. Isn’t the next logical step for these totally independent killer robots to be devise their own mission goals? This brings into distinct real of possibility of a man vs. machine war in our future and it could very well transpire within our children’s lifespan. Science will inevitably pass the realm of science fiction.

Although the Pentagon still requires autonomous DARPA killer robots to maintain human oversight, the real advantage of such a weapons system would lie within the ability for the weapons systems to have the capacity to make judgments on the battlefield. This one principle runs contrary to maintaining human oversight. Soon, it is clear, that the DARPA killer robots will soon be operating autonomously.

With the advent of killer robots, an international killer robot arms race will take place resulting in future battles being fought between competing armies of AI robots. Will the rules of war apply? What about the Geneva Conventions? If a DARPA killer robot commits atrocities against humans, will it be held accountable? Does accountability even matter to an inanimate object? So what if a  robot is “put to death,” and a duplicate is constructed. Can science ever develop a conscience for a killer robot? And if the purpose for the killer robots is war, why would governments provide an ethics override mechanism?

Human soldiers (e.g. Gestapo) have been programmed to commit genocide. It is a far simpler task to program a robot to commit the act more efficiently and without any second thoughts. Dictators always face the threat of human insurrection against their tyranny. With an army of DARPA killer robots, the threat of a palace revolt would be removed. In fact, killer robots are a perfect choice to carry out Obama’s NDAA provisions for disappearing and murdering political dissidents. If a present or future American dictator wished to eliminate a class of people from society, Nazi style, the killer robots are the ideal selection due to the efficiency of this weapons system.

Even Fox News is advocating for a ban on these artificial weapons systems. I believe that humanity has more to fear from DARPA killer robots than creating an unethical and brutal army and/or tyrannical police force. When considering the principle of Moore’s Law, in which computer capacity doubles every 18 months, how long will it be until these machines will develop the capacity to stop following orders and begin to make their own decisions? And what if in their new found decision making process, the DARPA killer robots stop viewing “foreign robots” as the enemy and begin to focus on man as their new enemy? Since their prime directive is killing, how long would it take until humans become the most endangered species on the planet? Perhaps the DARPA killer robots will create an Agenda 21 style of a human “Wildlands/Human Refuge Zone” creation, which will prevent robot intrusion into protected human habitats, except, of course, during hunting season.