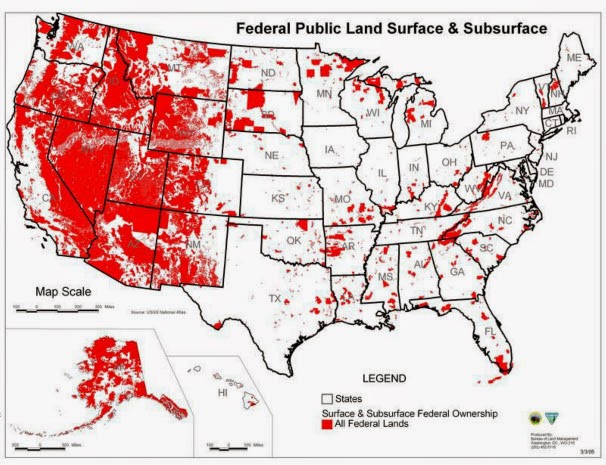 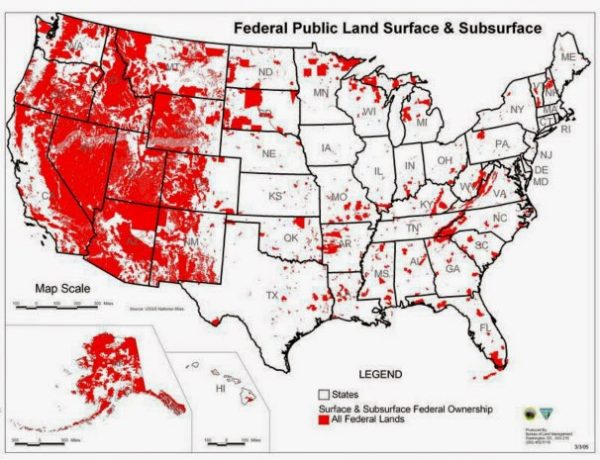 Before I begin please read parts 1 and 2 (out of 4) of my RIGHT SIDE PATRIOTS partner Craig Andresen’s expose on these federal land grabs either on his blog ‘The National Patriot’ www.thenationalpatriot.com or on my blog ‘The Patriot Factor’ www.thepatriotfactor.blogspot.com as each part leads into the next part.

Now let’s recap some important facts…according to the Congressional Research Service, the federal government (including the U.S. Bureau of Land Management, the U.S. Forest Service, National Parks, and military bases) controls roughly 81% of the land in Nevada, 62% in Alaska, 67% in Utah, 53% in Oregon, 62% in Idaho, 42% in Arizona, 48% in California, 48% in Wyoming, 35% in New Mexico, and 36% in Colorado, and the BLM also controls 700 million acres of subsurface mineral estates throughout the nation.

These numbers equate to roughly 260 million acres in the western states…translating into a land grab equal to the size of Colorado and Wyoming combined…with most of that land being listed as mixed-use land (land allowing for two or more different types of uses, for example land used by the public or rented to private companies)…but now the feds want to transfer 140 million of those 260 million acres over to what they call ‘Treasured Land’ status (land that NO citizen or private company can access).

But why are the feds so interested in gobbling up the western lands as opposed to lands in other parts of the country…as Craig told you in Parts 1 and 2…it concerns reserves of oil and natural gas in addition to controlling the flow of water (he who controls the water controls the populace), but there is more to it and it has ramifications for every man, woman, and child in these United States for what sits under the surface of the land is what the feds are so desperate to control…and in a word it’s ‘uranium.’

Uranium…one of the most precious elements on Earth…primarily used for the generation of nuclear power, but it’s also used for quite another purpose…as in nuclear weapons…as in the main component of America’s nuclear arsenal lies under the surface of the lands the feds are trying to grab.

And what will happen to all this uranium as thanks to Obama lowering the numbers in our nuclear weapons arsenal and his placing a moratorium on building any new nuclear power plants…nuclear power plants that would help supply America’s energy needs thus cutting our dependency on foreign oil…on Arab oil. And remember, the feds would NOT be so desperate to grab up land that was just going to sit there, so if we can’t mine or use the uranium then who will?

When you cut through all the subterfuge that is a hallmark of this administration one country alone comes to mind…China. And China will benefit from our uranium at the expense of the American people.

China currently has 49% of the world’s reactors under construction…we have 2%…so their need for uranium is great. And with China on target to build and complete their much needed nuclear power plants within 5 to 10 years in order to help supply clean energy to its growing populace, China will need uranium and lots of it. And while China does have some deposits of uranium, that uranium is embedded in coal and burning that coal to get to the uranium would cause pollution levels to rise to what’s known as ‘choking conditions’…levels so high that just the idea of burning said coal has forced China’s hand to garner their supply of refinable uranium from other countries for their energy needs.

Now enter center stage the U.S. With major deposits of uranium under the surface of the lands the feds are trying to grab…and with the U.S. owing China huge sums of money you just know that once the feds own the land…actually steal the land…that ‘suddenly’ it will be announced that this administration will allow China to mine the uranium to pay off America’s notes due. And in allowing China to mine the uranium that they will ship home to be refined…and to probably drill the oil and tap into the natural gas on these lands as well…a country we owe countless dollars to will be allowed by the feds to strip our lands of its natural resources…of energy sources our country could use to cut our dependency on foreign oil.

And why will Obama allow this…the answer is quite simple. Remember, China has lent us billions of dollars and even when we defaulted on the notes due, and even though we’ve only paid interest on said notes, China continues to lend us money…continues to do so even as the dollar declines in value, as our S&P credit ratings continue to drop, all while Obama continues to have his hand out. So why is China willing to lend us money…it’s because China wants…China needs…the uranium that’s under our land because as their population grows they need to meet their population’s energy needs.

Simply, China does NOT want American land per se as some have feared…China wants what’s under the land and they want it all…period. And as we continue to pile up notes owed to them, they could very well will soon own it all because we are indeed indebted to them.

And with the U.S. using 55 million pounds of uranium each year…equating to 25% of the global supply…we only produce 5% of the global supply…meaning we import over 90% of the uranium we use. But 5% would still be enough to fuel all our energy needs so why don’t we use our own uranium…price manipulation is why. Think of it this way, if we used our own uranium it would drive down the price of uranium on the global market as we, the biggest buyers of uranium, would NOT be buying what we need from others. By our NOT using our own supplies this helps to keep the global commodities price of uranium artificially high. And anyway, if we did use our own uranium, over time we would gain energy independence and our economy would flourish cutting away at our dependence on Arab oil.

And there’s a very strange caveat in all this for instead of outright selling our uranium we instead export some of our uranium to Canada (amongst other countries including Taiwan NOW part of China) and in return Canada imports their uranium back to us. And this makes NO sense for why are we exporting what is being imported right back to us? The answer to that is simple…Craig and I believe Canada might be acting as a ‘straw-man’ for our uranium to be sent directly to mainland China NOT having to go in small quantities through Taiwan and doing so under the radar…remember Canada does sell its uranium to China so why NOT sell them our exported uranium too. The feds make money…lots of unreported money…Canada makes money, and China is happy that they don’t have to go to the costly expense of refining it from their coal deposits which would add to their pollution problems.

So as Barack HUSSEIN Obama revels in selling us out to China to pay off the debts he’s run up, an added bonus to him is that he gets to keep us dependent on his brethren’s oil for decades to come.

And guess what else is under the feds grabbed up lands that China so desperately wants…that China so desperately needs…an element called thorium. China is currently working on a uranium-free nuclear plant in its attempt to break reliance on pollution causing fossil fuels and to hold down the costs of having to refine uranium. And using the cheaper and environmentally cleaner radioactive element thorium instead of uranium would be a win-win for them all the way around.

Now add into the mix Iran who desperately needs uranium for their nuclear ambitions. Iran does NOT have the needed deposits of raw uranium so Iran must get their uranium from other countries…like their trading partner China perhaps. But, if Obama allows China to mine uranium on the lands they’ve grabbed to pay off our notes due, and if China then decides to sell or trade some of the uranium they’ve mined in the U.S…or if China gets our uranium through sales from Canada…we still have NO control over what China does with anything coming from our country. Think about that for moment…our uranium possibly mined by China on U.S. soil or our uranium coming to them through Canadian exports could be sold to Iran by China.

And here’s a little something else to raise your ire…the BLM claims that they’re grabbing these lands to keep them environmentally safe…to protect endangered species. And that is a lie as The Arizona One Mine is producing uranium in northern Arizona on land managed by the BLM itself. Originally approved by BLM in 1988, this mine has been in active production since 2009, producing up to 300 tons of ore per day that is processed at White Mesa Mill by Energy Fuels, Inc., a Canadian company known to do business with China.This company that sells to China also explores for mines, develops and produces uranium and vanadium properties throughout the western United States on property managed by the BLN, with its principal properties located in Utah, Arizona, Colorado, New Mexico, and Wyoming …the very lands the feds are grabbing up.

What a vicious circle of deceit and lies courtesy of our federal government.

And there is something else you need to know concerning what’s under the ground of the federally grabbed lands, and it will be explained in tomorrow’s Part 4 of Craig’s and my expose on these government land grabs…and it’s something that will shock you like nothing before.