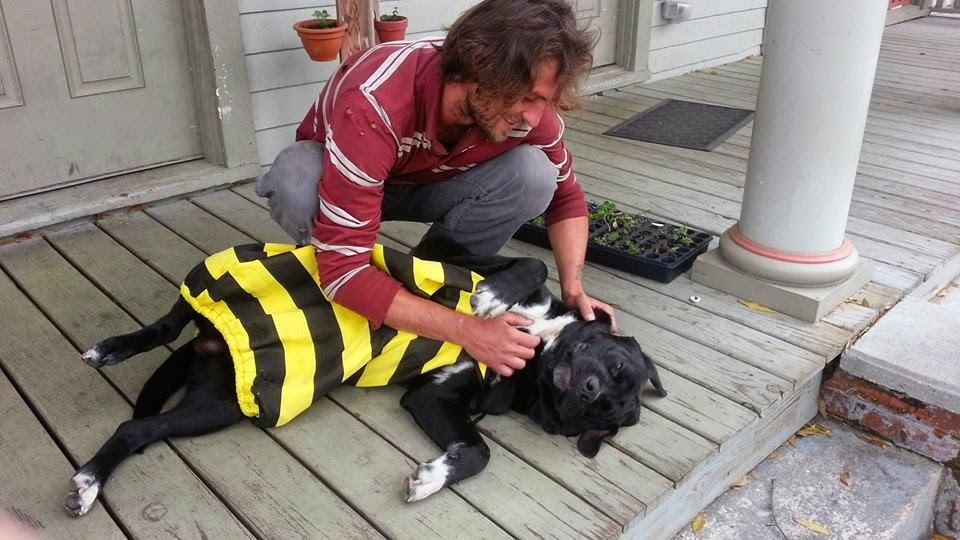 Brandon Carpenter is from Maine, but will remain in Sulphur, Louisiana until he gets justice for his dog, Arzy. It was there, while traveling with a friend, that they sought temporary shelter from rain in an open box truck in a parking lot belonging to the local city paper. Arzy was a Lab-mix dog that was tied by a 3-foot leash. Soon after, Officer Brian Thierbach pulled in and began arresting them for trespassing. While they were under arrest Carpenter heard his dog get shot and watched it die as he was in handcuffs.The officer said the dog attacked him, but at least one eyewitness from the city paper said that never happened and that the officer was seen playing with the dog before shooting it for no reason. Before the shooting, Thierbach had asked if the dog would bite. He was told “no” and that the dog was friendly, but he shot Arzy a few seconds later.

Monday April 28th is one of the hardest days I’ve ever had on the road, at approximately 7am this morning in Sulphur, la logan and i hoped off of a freight train and sought out shelter from some passing showers. ….. we chose a big box truck out back of a warehouse, 10 mins after we settled in, a deputy arrived, gun drawn and told us to get out of the truck. Obviously we complied immediately. ….. the officer put us in cuffs and set us on the ground. …. he asked if my dog was going to bite him and i said no, because he wouldn’t. …. my back is to the officer as he makes his way to the truck, gun poised in hand. …. about 20 seconds later without a warning, a scuffle, a bark or a voice command there was a single shot fired, right through the top of arzy dogs head. …. I sat there in cuffs in the rain watching my dog Convulse his last few breaths. ….. I was sobbing and asking why. …. the officer tried to fight off a smile while telling me that the dog tried to bite his foot. …. was on a 3 and a half foot leash. …..unable to move more than 3 and a half feet…. I then was placed in the back of the cop car facing my dead blood stained dog, about a half an hour later, a few more cops showed up and i had to watch as they stuffed his body into a trash bag and threw him into the back of a truck. … I feel so sad and empty right now. …… how can people have so much hate in their heart? I’m sick with grief.

They are raising funds to fight the injustice and have, like many hundreds of others traumatized this way, have set up a justice page for Arzy. A petition to dismiss Brian Thierbach has amassed thousands of signatures.But the story doesn’t end there. The officer soon began claiming that supporters of justice for Arzy were issuing death threats to him. The claim of the officer is, of course, unsubstantiated. Given the track record of the Sulphur, LA police department, however, one is not tempted to give him the benefit of the doubt.A common theme I see when this happen, based on Facebook justice pages I’ve subscribed to, are reports of the officer claiming that supporters of the dog owner called in death threats. In the age of traceable and recorded phone lines, how likely is that?Without apology, here are a few more reasons I question the ‘death threat’ claims:

We do not condone violence or threats of violence, but here’s why I have no sympathy if that actually took place…This is the real question we need to ask.If people are supposedly making threats on the officer’s life, why is this not a reason for he and the department to pause and reflect on his unacceptable actions and change? It never is. Instead, they make themselves out to be the victim. Like the cop who casually pepper-sprayed handcuffed Occupy demonstrators and then won a sizable settlement in court for emotional distress – to him. Or one of the cops who killed Kelly Thomas and then uploaded a sympathy picture of his boo-boo after using those limbs to beat Thomas to death – both cops found not guilty. They might get a promotion for irrecoverably injuring the innocent. In addition to that absurdity, some officers are only removed from their position for their own safety. Sometimes they move to a different department to kill again.If you think this is a lack of training issue, please consider the new trend sweeping departments in California – using live injured animals for target practice!I have not read about even one officer apologizing for taking a life – they and in most cases, their supervisors truly believe that no wrong has taken place. They even act baffled or emotionally devoid at the owner’s reaction to watching their companion die.He might – as in this case and in others – act gratified.