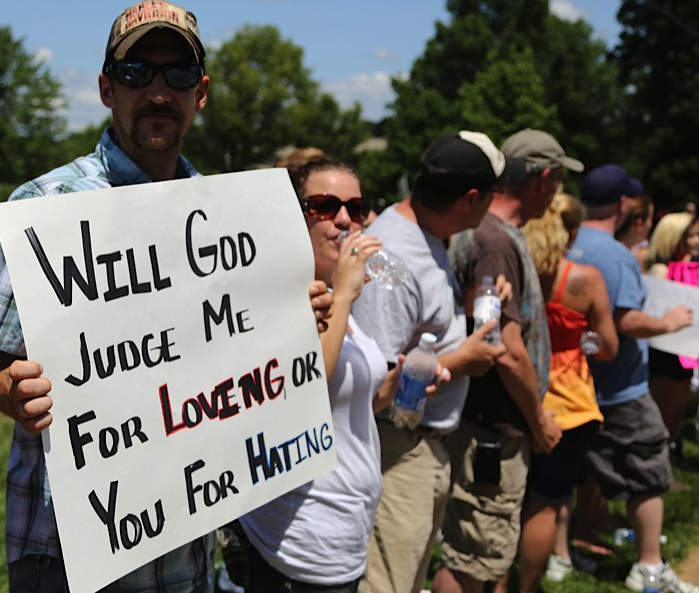 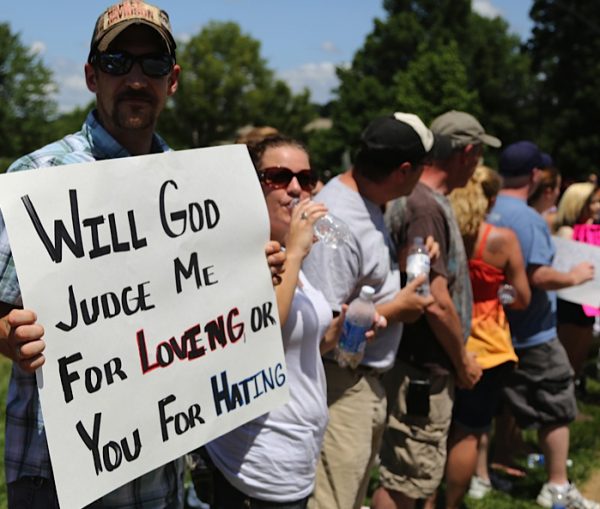 Homosexuals, and Liberals in general, “love” to bash Christians with the club of Love, reciting their mantra that we are not good Christians because we do not “love” them, and pointing out that Christ said we are to “love one another.”

The problem with this argument is that loving someone does not translate as accepting and approving of any and every behavior a person come up with – Love is not approval of sin, nor tolerance of it.

So to those who would misappropriate and cross-wire the Christian ideal of “love” (where it is held as a supernatural virtue in the full sense of agape) through the popular zeitgeist of naivety and conceptual immaturity, to bend the very notion more toward a mere eros physicality to sway the gullible toward an acceptance of disordered behavior, I have a few words to say.

Wrapping unnatural vice with a shiny candy-wrapper of faux virtue will not transform its inner-nature nor pass the sniff test with those who care to use all their good senses before taking the noxious bait, or passing it along to friends.

We do not say to an alcoholic, we love you, and we also love your alcoholism that is killing you. Moreover, you would not encourage this individual that it is OK to be inclined to such a disorder. A rational and human “loving” person would instead do everything in one’s power to get this other to see that the direction in which he is heading leads to destruction and damnation.

To anyone initiated into the deeper aspects of this debate they know that the dismal statistics of misery among homosexuals is just staggering – super elevated death and disease rates, suicides, accidents, emotional trauma and drama, exorbitant costs to societal born medical costs due to treating people with a self-inflicted deadly disease, sodomite-on-sodomite violence, etc, ad nauseam. We just don’t see much good fruit, if any, coming from the so called “gay” community. What we see are attacks on family values and extortion techniques and politics to try to force everyone to accept their lifestyle choices by holding the rest of us hostage, and through redefining the most fundamental and ancient traditions of humanity – marriage. That hurts us all since, in case no one has noticed, not many young men are marrying anymore either. There’s nothing special to it in the eyes of many now that morals are fluid and the penalties for the failed “till-death-do-us-part” vows are replaced with “till-something-better-comes-along” or “till-we-can’t-agree-on-the-rent-share-terms” become not worth the risk.

One does not help homosexuals, or anyone for that matter, through amazing feats of sophistry and dialectics of argument that only make a person feel good in the continuation of engaging their disorders to their own harm (physical, emotional, spiritual, intellectual, self-dignity of species or otherwise). We also just don’t see those born with physical handicaps, or more to the point adulterers, sadomasochists, fornicators, liars and thieves, parading down-town on holidays taking pride in their handicap, their adultery, their theft, sexual aberrations, their sin, or criminality (nay, even reveling in it as a liberating and elite advantage) and forming their identity around such behavior; it is only homosexuals who engage in this absurd if not outright mentally deranged conduct and attitude. It’s as if they have taken upon themselves to act as if they are a new species of human onto themselves — one that is perhaps more enlightened and superior since it transcends race, creeds and the traditional human mores of any kind. My complaint is that they are really trying to redefine society and seem to operate to only one real new (irrational) dogma “You must respect me for what I choose to be (or else I hate you for your choice to not be like me or accept me.”

Christ called us to repent. He did not tell us to live in our sins and to accept perversions of every kind to live among us, hold hands and sing Kumbaya. He told the woman caught in adultery to sin no more. That was an imperative to change, not a directive to continue.

SIN matters irrespective if one believes in sin or not. All Christian theology holds that sin wounds us terribly each and every time and has effects on our relationships (with self, with others, with community, with nature, with the church, with God). It’s toxic and deadly stuff. We lose our human dignity with each offense and it becomes increasingly difficult to turn away from as it becomes “who we are.” Even when we do earnestly try to turn away, habitual sins of the past will try to return the person back to it (why many Christians believe in a strong penance as a discipline to anneal the will and to draw on grace to fight and overcome old habitual sins). It is impossible to run from or hide from guilt – it is part of our own judgment system given by God (“I will write my laws on your hearts”). It can be covered up for some time with diversions, sensual impulses, drugs and so on, but it always eventually drags you down (and ultimately leads to asking God for His help too – so that opportunity for grace abounds ever more too as we sin to give us every chance to overcome it).

Bottom Line: It is a perversion of any legitimate notion of love to aid and abet illicit relationship or sexual behaviors; being indifferent to it is the same as consenting to it.

SSA individuals have the same options as do heterosexuals in healthy relationships with the same sex – loving one another as brother and sister (filial love), or close love of friendship. Carnality is not any dimension of love in the least absent two necessary conditions:

100% of all homosexual encounters are known a priori to be 100% sterile and fail the first test. It also fails the 2nd test in lack of any facilities for natural unity since it wars with nature itself and is not in accord with its order. In fact, it disgraces (literally removes grace) and results in loss of human dignity of both. Causing harm and elevating risk of disease and death is not unitive rather it is destructive and evil. It certainly is not in perfect symmetry and complementarianism.

The problem with the love argument is it lacks any orthodox notion or principal of love and only tangentially hits (quite by accident) one aspect of the lowest principal of love called eros – mere physical pleasure. Most sodomite men I have known are not in the least romantic or emotionally involved – they are more like buddies who get out together as playmates and give each other as sex for pleasure and rewards (not much different in depth than the buddy sex we see a lot in “friends-with-benefits” relationships in modern hetero dating). The other thing we often witness, is nothing but male domination of another male who wants to be submissive, due to a poor self-image. Female homosexuals are often just emotionally damaged women who have been in relationships with men, been abused, marginalized, or women seeking the intimacy and emotional availability that they cannot get from men with whom they have had a romantic congress in the past, again more of a close-friendship-with-sex arrangement.

Bottom line: Accepting a person for what he is, is not love, in any sense of the word, nor does love imply putting up with any and every behavior a person comes up with. To be indifferent to a person’s behavior, to not correct, to not admonish, is not Love.

Shea Bernard; BSEE, MCSE, MCITP, CCIE, IT Consultant, with 30 yrs in the IT industry. He is currently pursuing graduate degrees in History, and is completing an undergraduate in Religious Studies, and hopes to begin an undergraduate in Astrophysics and Geology upon completion of graduate courses. Mr. Bernard is married with two children, owns and runs two businesses. Follow Shea Bernard on Twitter: https://twitter.com/SheaBernard