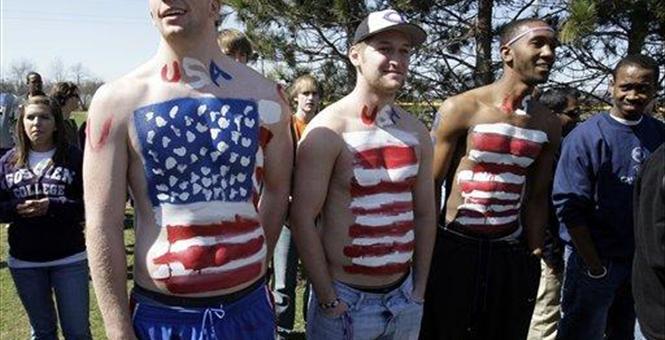 A protest against a California school district’s decision to ban the wearing of American flag t-shirts on Cinco de Mayo has begun this morning, with demonstrators displaying large flags and banners outside Live Oak High School in Morgan Hill.

The demonstration stems from an incident in 2010 when four students at the school were told by assistant principal Miguel Rodriguez to turn their shirts inside out or go home because the American flag designs were seen as “offensive” to Mexican students on Cinco de Mayo, a day on which Mexicans celebrate their heritage.

The incident led to a lawsuit, Dariano v. Morgan Hill Unified School District, in which students claimed their First Amendment rights had been violated. However, in February the 9th Circuit Court of Appeals sided with the school, asserting that the threat of racial violence as a result of the t-shirts trumped the right to free speech. The case is set to be heard by 11 judges after another appeal was filed.

“The practice of limiting one group’s free speech rights because that speech might cause another group to react violently is known as the “heckler’s veto.” It is understood by free speech enthusiasts to have a chilling effect on First Amendment rights,” writes Robby Soave.

A group calling itself the Gilroy-Morgan Hill Patriots arrived this morning to display large American flags outside the school as students arrived for classes.

“The school…. erected a temporary chain link fence, covered in mesh, so that no one can get in – or see into – the school campus. And on Monday, school leaders put up a giant green-and-gold poster that reads, “United at the Roots,” reports NBC Bay Area.

According to Freedom X, the organization representing the Gilroy-Morgan Hill Patriots, the local community has been hostile to the protest.

“The group’s plans are not being received well by members of the community who have threatened protests in order to disrupt the event,” states their website. “The Morgan Hill Unified School District has held public meetings where the Patriots have been derided as racists. The district’s superintendent, Steve Betando, has repeatedly urged the Patriots to cancel the event ostensibly for safety reasons. Yet when pressed to explain what safety issues he anticipates, he is unable to give a clear answer.”

The NBC report clearly skews the issue in favor of the school, without mentioning whether or not students would be allowed to wear t-shirts bearing the Mexican flag.

Dozens of protesters began arriving outside school gates before 7am and were greeted by honks of support from passing motorists.