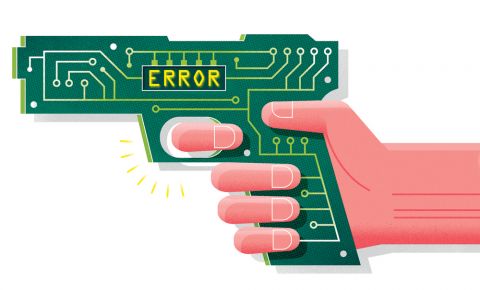 For many gun rights advocates, May Day was a close call for one aspect of gun control. That’s the day that “smart guns” nearly went on the market – which would have triggered a 2002 law in New Jersey requiring that ALL statewide gun sales be ‘smart guns’ within three years of the first date of sale anywhere in the United States.

That would be a critical blow to the right to bear arms in New Jersey, furthering the often absurd efforts of gun control advocates in the wake of Sandy Hook and other exploited tragedies. That’s because many in power don’t just want ‘smart guns’ to be an available option on the market, they want them to replace all other legal firearms.

A Maryland gun store owner named Andy Raymond, owner of Engage Armament, found out about the smart-sale ‘trigger’ clause the hard way, after he stocked them and announced he was set to become the first retailer in the nation of the Armatix iP1, a .22 caliber ‘smart gun’ that requires the owner wear an RFID watch to authenticate and enable the firearm.

According to the manufacturer, “the intelligent iW1 wrist watch arms the weapon for firing and also has the following functions”:

That’s when he met a wave of criticism – and reportedly threats as well – urging him not to initiate the effects of the law that was written to mandate the replacement of traditional firearms in New Jersey – and perhaps eventually elsewhere. “I would never buy a gun from a retailer that does anything to hurt pro 2A causes. These guys do,” one Facebook user wrote in opposition.

Raymond issued an apology video, citing an onslaught of “drama” after fierce backlash from gun owners. “I did not know I would be screwing you over,” Raymond’s video stated. “I’m terribly sorry…You don’t have anything to worry about from me.” Many gun rights enthusiasts applauded Raymond’s reversal, vowing to now support the store.

“If someone wants to buy a smart gun, that is fine,” Raymond explained in a subsequent Facebook address. “When the law legislates it, that is a sin.”

Meanwhile, the NRA is urging the repeal of the New Jersey law, as many Democrat lawmakers, including State State Majority Leader Loretta Weinberg (D), who sponsored the bill, are vowing to repeal it, accusing the gun lobby of blocking the sale of any smart guns due to the mandate to override traditional gun sales.

The issue with Andy Raymond’s selling smart guns may be a moot point anyway, as there were reports in February of a California shop preparing to sell the smart gun soon. State Senator Loretta Weinberg apparently already issued a letter to New Jersey’s Attorney General demanding he “certify” that the technology is ready (as the wording of the law called for).

“I expect your prompt attention to this matter and look forward to your reply,” Weinberg wrote. Reportedly, she has not been issued a response.

Silicon Valley investor Ron Conway is backing a $1 million contest for smart gun technology, with emphasis on the smart phone’s fingerprint unlock mechanism. “We need the iPhone of guns. We want gun owners to feel like they are dinosaurs if they aren’t using smart guns,” Conway was quoted in the Washington Post as saying.

Plenty of others in the pro-gun control crowd have been pushing for “smart” solutions on guns… because, you know, anything that’s “smart” is automatically foolproof.

Of course, the idea that the technology works at all or enough to go on the market, and the idea that all its flaws and drawbacks are worked out are two entirely different things.

But if the gun is to be used for self-defense and/or security purposes, it is clear that it is just one more element that must be kept up with and work properly for the weapon to be effective – or in this case, to work at all.

The use of RFID authentication creates numerous problems with privacy, government intrusion, malfunction, interference and hacking. If hackers and robbers band together, they could make home defense inoperable: if a gun was inoperable, or the battery for the watch required to make the gun work was dead, or just the fact that the gun’s red light would give it away to any criminal, make deterrence ineffective as well.

Perhaps worse, if governments used the same “kill switch” technology it has over the Internet and cell phone communications (as the law enforcement community is now advocating as standard), it would act as a “kill switch” to 2nd Amendment rights as well. A world filled with “smart guns” would be effectively unable to resist tyranny… just saying.

Here are some of the arguments made by commenters themselves, wary of the advent of the “smart gun” age on a promotional video for the Armatix iP1:

“Lmao… someone really invented this piece of crap. Lol. ”

“There are more problems with this than benefits…”

“Keep your crap ideas out of America! This is a solution looking for a problem. I want a gun that works when needed! Not a gun that won’t work if my watch goes dead.”

“Great for movies. Can anyone say dead battery or hacked? Keep it simple, stupid (KISS). The last thing a free citizen needs is a gun with an RF signature. That would be as dumb as a President placing monitors in our newsrooms… Where did I hear that?”

“This video plays on fears of an rare (not unheard of, but rare) problem, to sell you on a less-reliable solution. Way to fuel the gun-grabbers’ fantasies.”

“So if the watch battery or the battery in the gun are dead then you can’t use it either. Plus what if there is a malfunction with the electronics which are much less reliable than a good gun design. If we all have these in the future, criminals will make jammers so they can break into your house and know that your gun won’t work when you try to defend yourself.”

Darth Varner sums up the argument well in a lengthy comment on the Verge, and why many think that ‘smart guns’ are just a precursor to authorizing only LEOs and special cases to have guns in the first place (as it is now in countries with strict gun control):

“A personal protection firearm is something you hope you’ll never have to discharge outside a practice range. Period. It can go unused for extended periods, but if it fails to go bang because you forgot to wear a particular watch, your hand was dirty, it ran out of batteries, or got shorted out due to water exposure you may die.

This is why the fact of the matter is what the article alludes to: there is no market for smart guns. Those who think this is a good idea, are the ones who actually want no guns whatsoever for any reason; any actual person looking to purchase a firearm doesn’t want this. Anything less than 100% reliability is a non-starter. It’s not government conspiracy, it’s simple reliability.”

Obviously nothing is 100% reliable. The overall reliability of a given firearm is a product of the reliability (probability it will not fail or malfunction) of all components. So, if there are 5 components, you have:

This means the overall reliability is always, by definition, lower than the reliability of the lowest. Put differently, it’s actually worse than the weakest link in the chain.

The smart gun tech adds a cascade of new and unnecessary reliability checks to this function, all of which are much higher than the original purely mechanical design.

Where c6 is the battery, c7 is the presence of the watch, and c8 is a blanket term for all possible electronic failures for any reason. There are a lot of these; I’ve covered a few in other posts.

R1 was probably around 99%, probably closer to 99.5%. Firearm design is that good. Add in all of these other factors, though, which include human error and forgetfulness, and R2 is going to be south of 90%, and quite possibly more like 75-80%.

Nobody who understands this would purchase such an item for personal protection. Your life is not worth that chance.” [emphasis added]