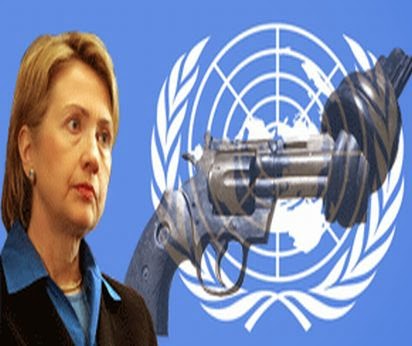 By now, it is nothing more than a formality to say that Hillary Clinton is only “thinking” about running for President in 2016. In fact, Clinton’s increased visibility and speaking appearances are clearly just the amping up of her 2016 campaign.Unfortunately, this is what makes her recent comments at the annual conference of the National Council for Behavioral Health even more concerning. Long known for her aggressive assault on the Second Amendment, Clinton told the audience that the United States must reign in its gun culture or the country could end up being a place where even insignificant confrontations lead to shootings. When asked about the mental health aspect of guns in a Q&A session, Clinton responded that “We really have got to get our arms around it because at the rate we are going, we are going to have so many people with guns everywhere fully licensed, fully validated.” Of course, one might logically ask who is the “we” that Clinton is referring to. For oligarchs like Hillary, a population with guns everywhere is indeed a frightening prospect since these individuals are generally harder to dominate than those that have been completely neutered and disarmed.Clinton also stated that “I think we’ve got to rein in what has become a almost article faith that anybody can have a gun, anywhere, anytime. I don’t believe that is in the best interest of the vast majority of people.”

Again, it is not the American people who are endangered by the prospect that anybody has access to purchase and own a gun as per their right (“the right of the people to keep and bear arms shall not be infringed” anyone?). It is the ruling class from which Hillary Clinton emerged and continues to be a part of which has the most to fear.Clinton also stated that “we are living at a time when there is so much external stimulation and so much internal confusion in certain people, [it would be a bad idea to let them] go to bars with guns, let them go to schools with guns, let them go to church with guns.” Despite that Clinton has fingered the “external stimulation and internal confusion” as the culprit of such discord, her answer is to violate their inalienable rights instead of addressing that external stimulation and internal confusion. Indeed, the “internal confusion” of which she speaks might have more to do with her friends in the culture industry as well as she and her husbands’ economic policies that have gutted the United States of its jobs. But I digress…Although Clinton laughably suggested that she still “supports the right of the people to own guns,” she continued to attack the very idea.As CNN writes, “Referencing a shooting earlier this year where a 71-year old retired police officer shot a 43-year old man texting in a movie theater, Clinton said people thinking they ‘have the right to defend themselves against the gum chewer and the cell phone user by shooting the person’ is reminiscent of countries she visited ‘with no rule of law and self control.'”Perhaps Clinton is reminiscing about her journey several years ago where she remembered dodging sniper bullets (dangerous gun owners!) that turned out to never have existed in the first place.Or, perhaps Hitlery is truly concerned with keeping the mentally ill from having easy access to firearms. Perhaps she is more concerned with the possibility that an actual psychopath may have access to enough firepower to cause serious damage. The thought that a person who is capable of watching a 70-year-old Libyan be beaten within an inch of his life, sodomized by a bayonet, and then shot to death before cackling uncontrollably about the murder while stating that “We came. We saw. He died.” is truly frightening indeed. In the end, the best and most effective guard against psychopaths with weapons is the refusal to allow Hillary Clinton the office of the Presidency.