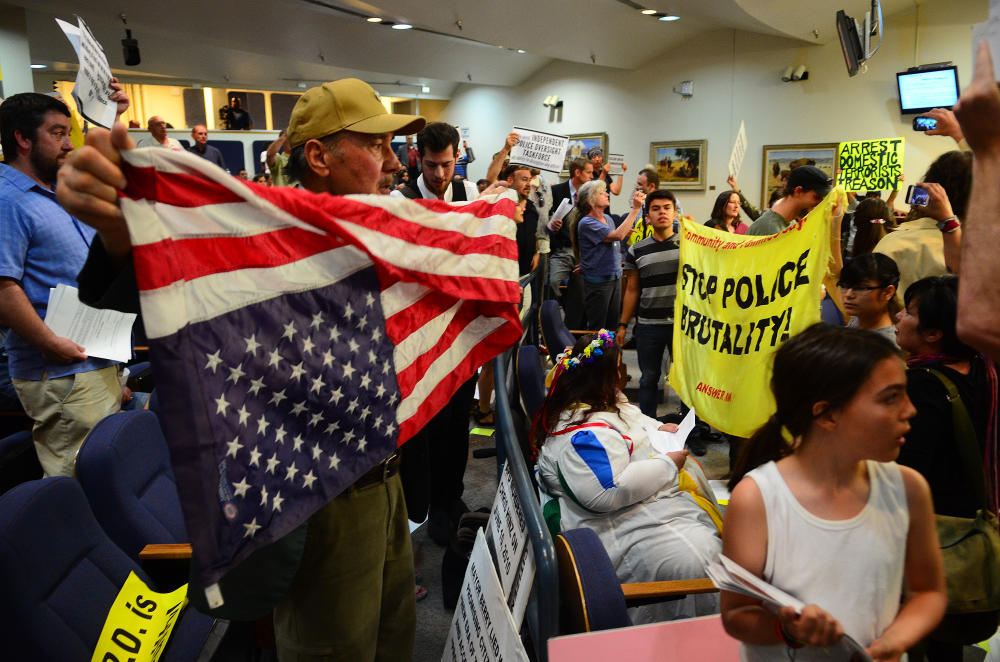 Protesters demand arrest of police chief over spate of shootings

Albuquerque, NM residents have vowed to storm another city council meeting set for tomorrow just days after they forced councilors to flee following a raucous protest against police brutality.

Demonstrators crowded Albuquerque city council chambers on Monday before serving a “people’s arrest warrant” against Albuquerque police chief Gorden Eden, causing him to make a hasty dash for the exit. Protesters also called for the removal of Mayor Richard Berry.

Residents are irate about rampant police brutality and corruption, with Albuquerque law enforcement officers having been responsible for 40 shootings since 2010, of which 25 were fatalities. The U.S. Justice Department also released a report last month which called for institutional reform to stem “patterns of excessive force” that have dogged the police department.

Residents have promised to keep up the pressure, starting with the rescheduled meeting on Thursday.

“Nora Tachias-Anaya, a local activist, says protesters are planning to attend a rescheduled council meeting Thursday and will not stop criticizing the Albuquerque Police Department,” reports the Associated Press.

If tomorrow’s meeting is anything like what unfolded on Monday, expect councilors to be heading for the exit doors once again.

University Professor David Correia, who led the takeover the of the council meeting, said that some of the demonstrators were prepared to be arrested as they engaged in a conscious act of civil disobedience, risking a fine and 3 months in jail.

Video footage of the incident shows protesters yelling and waving banners as City Council President Ken Sanchez attempts to address them. When the councilors left for a five minute break, the protesters took over their seats.

“While it may have been nonviolent, it was loud and rowdy. At one point, a person threw a stack of papers into the air. When protesters ignored Sanchez’s attempts to restore order, he called a five-minute recess. When he tried to reconvene the meeting, protesters were still loud and jeering, and he ended the meeting,” reports the Albuquerque Journal.

The recent SWAT team shooting of 50-year-old Air Force veteran Armand Martin was just the latest in a string of incidents that have caused outrage amongst residents.

The most egregious example involved the killing of 38-year-old homeless man James M. Boyd, who was summarily executed by APD officers for “illegally camping” and arguing with police. Officers used flash bang grenades, dogs and beanbag rounds against Boyd as he begged for his life before gunning him down.