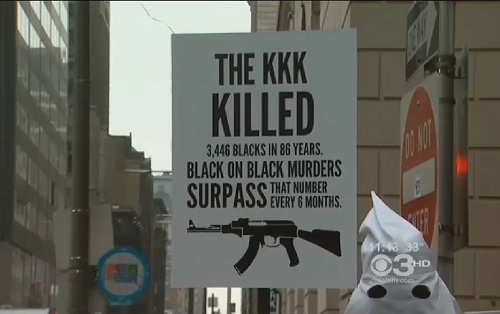 Editor’s Note (Mac Slavo): If you’ve ever spent some time reading Karl Denninger’s Market Ticker you’ve come to realize that he is a straight-shooter of the highest order. Whether commenting on geo-politics, the economy, corruption or the persistent destruction of our liberties, Denninger doesn’t mince words. His arguments are not only logical in a world plagued by irrationality, but backed up with solid data.

In the following article Denninger details the lies, half-truths and coverups surrounding America’s gun debate and the war on drugs. As it relates to gun control, our government and the politicians running it often cite manipulated statistics in order to push forward their agenda. The goal is to disarm America’s tens of millions of law abiding citizens of their right to bear arms. But as is often the case, Denninger blows their entire argument to smithereens with real facts, showing that the violent crime statistics often used to justify the actions of gun control proponents are created by their very own actions and policies.

This is a set up and most Americans, especially those who subscribe to the notion that government is trying to make everything better, haven’t a clue that they’re being indoctrinated by the very people who have caused the problem. –Mac Slavo, SHTFplan.com

Take away the astroturf games like the so-called grassroots organization(s) that sprung up (by magic!) out of Newtown and you wind up with a truly ugly truth when it comes to gun violence in this country: Most of it is gang-related, most of the gangs are in our inner cities, and our President, along with the rest of the so-called “mainstream media”, simply refuses to address any of it.

Take a recent shooting in Chicago.  The media pictures of both shooter and victim are radically inaccurate measured against their own social media postings.

The truth about that particular shooting?  The gun, originally claimed to be stolen, wasn’t.  It instead passed through a number of hands, at least one of them on probation and a second person who allegedly took the weapon to the shooter knowing it was going to be used to commit violence, a 30ish old aunt who allegedly went for the show (seriously!) someone who unjammed the gun after it malfunctioned and gave it back to the girl who had just tried to murder the victim but the weapon failed to fire.

Nor is that all.  We have another case where a “cute little charter-school graduate” (as presented by the family and the media) appears to have a bunch of social-media postings of her bearing weapons of all sorts, including a rather-large revolver that looks right out of a Clint Eastwood movie and a pump-action shotgun.  Oh, and this angel apparently capped at least two people before being killed herself.  She was 17.

Are we ever going to address this instead of playing Astroturf games with kids who are drugged up on various psychotropic meds and then go insane — a rare but obviously far-too-common event?

And how did we do that?  We declared various self-destructive behaviors among and between consenting adults unlawful, generating an entire second economic system under the carpet that was then used to justify a “war” that we ourselves created and then declared.

The result has not only been a monstrously-high prison population it has also been an explosion of violence, without which we would be far down the list when it comes to the abuse of guns and property crimes.

Instead of admitting our stupidity in this regard just as is the case with the medical industry and its monopolist scams in the general case we have instead grown an entire industry around arresting, prosecuting and imprisoning huge numbers of people, most of them minorities.

What’s worse is that we are also watching them murder each other with wild abandon, while we sit in our chairs and refuse to talk about the statistical facts.

Indeed, if you take out black-on-black homicide in the major cities from our so-called “blood-red streets” that Bloomberg and others claim as our emblem of “endemic gun violence” you find that something like three quarters of all gun murders disappear.

There is a basic principle when it comes to solving problems in the general sense, and it applies here as with most issues: 80% of any particular problem is easy to solve, and reasonably cheap.  The last 20% is both expensive and hard.

But we won’t talk about the 80% or how it gets generated.  We don’t want to talk about the fact that we create these gangs by giving them an underground economy fueled by what appears to be an innate desire of man to addle his own mind, and which we can actually track back to the animal kingdom generally!

In the early part of the 20th Century we allowed power-brokers who were trying to protect their own industries to play on now-documented racism and false claims when it came to various drugs, with the now-iconic Reefer Madness being one of the poster children for that era.  We banned alcohol sales and created, almost overnight, an entire criminal class that shot up our cities and reaped huge amounts of profit from the desire of people to simply have a drink. The Depression effectively forced the end of Prohibition, but only for booze.

Today we have the worst of both worlds.  On the corner about two miles from my home is a store that has more forms of a popular drug in it than would be necessary to kill platoons of men, yet I can buy and consume as much of it as I desire.  In the gas station and grocery store I can buy still other forms of the same drug, again, limited only by my wallet.

At the same time in the nearest big city (and probably in my “nice” small town) there is a thriving underground economy.  Police officers with whom I’m acquainted tell me of the crack houses they bust with crude labs that threaten to blow up entire buildings — not through terrorist action but rather because the “chemists” inside don’t know what they’re doing or don’t care because they’re too stoned to be concerned with reasonable safety precautions.  The mind-altering substances they produce are addled with God-knows-what, the ingredient list likely driven by whatever is cheapest to get as a diluting agent so as to “stretch” what they’re producing for sale.  Some percentage of those drugs, along with mass-produced quantities in Mexico and elsewhere, stream into our major cities where the trade in them generates huge profits and massive amounts of violence, all aimed at “protecting” the highly-profitable trade in same.

Have we ever asked if the people who get hooked on meth and similar monstrously-destructive drugs would use them absent this pipeline of illegal supply and coercive sales capacity?  If those people could walk into any pharmacy and simply buy whatever you wanted, having only to prove they’re of adult age, being supplied not only their drug of choice but also a pamphlet describing exactly what was in the package were buying and its expected long and short-term effects,would they? Would they rob and mug people if the price of maintaining their addiction was one tenth of what it costs today via illegal routes of supply?

Or would they choose to try something else — perhaps a bottle of liquor or a pack of 20 Class A joints?

I don’t know and neither does anyone else, but what we do know is that plenty of people were addicted to opiates and other drugs before the “War on Drugs” was launched, and a very significant percentage of them were able to hold down jobs and lead reasonably-productive lives.  Oh sure, they eventually got sick and some died, but what we didn’t have was 17 year old kids shooting each other over insults, real or imagined, trumped up by what amounts to a trade war within our own borders.

I understand why Obama, Rahm and Bloomberg don’t want to entertain this debate.  If they were to do so with someone like me they’d be in a very tough spot, because I’d put facts and figures in front of them and the audience might conclude that we’ve created not only a prison industry and siphons off tens of billions of dollars, not only have we destroyed the earnings power of millions, most of them minorities with these same policies, but in addition we have a more than 50-year history that says we cannot win this war nor do we give a good damn about those who die as a consequence of our puerile and outrageous policy pronouncements in this area, most-especially the young people of color who are overwhelmingly both victim and perpetrator.

Indeed, some people might conclude that our President and the rest of the drug-warriors are in fact racists of the highest order in that they’re complicit in the murder of far more black people in a single year than the KKK ever hung from trees through its entire sordid history.

This much I’m absolutely certain of — our black community organizer-cum-President surely doesn’t want to face his rank hypocrisy on this issue.

Nor, for that matter, do the rest of the so-called Progressives.

The Market Ticker content may be reproduced or excerpted online for non-commercial purposes provided full attribution is given and the original article source is linked to. Please contact Karl Denninger for reprint permission in other media or for commercial use.

DCC Editor’s Note (Dean Garrison): From the information I have gathered it would seem that the “three-quarters” number is too high. Denninger may have been talking about inner city murders only, and in that case 3/4, or 75%, would be very close to accurate. Even so, black-on-black murders do account for nearly half of all homicides in this country. That does not include black victims killed by someone of another race or black murderers killing someone outside of their race. This is very significant when you consider that our black population is around 13%. Here is a breakdown courtesy of The Blaze:

A 2007 special report released by the Bureau of Justice Statistics, reveals that approximately 8,000 — and, in certain years, as many as 9,000 African Americans are murdered annually in the United States. This chilling figure is accompanied by another equally sobering fact, that 93% of these murders are in fact perpetrated by other blacks. The analysis, supported by FBI records, finds that in 2005 alone, for example, African Americans accounted for 49% of all homicide victims in the US — again, almost exclusively at the hands of other African Americans.