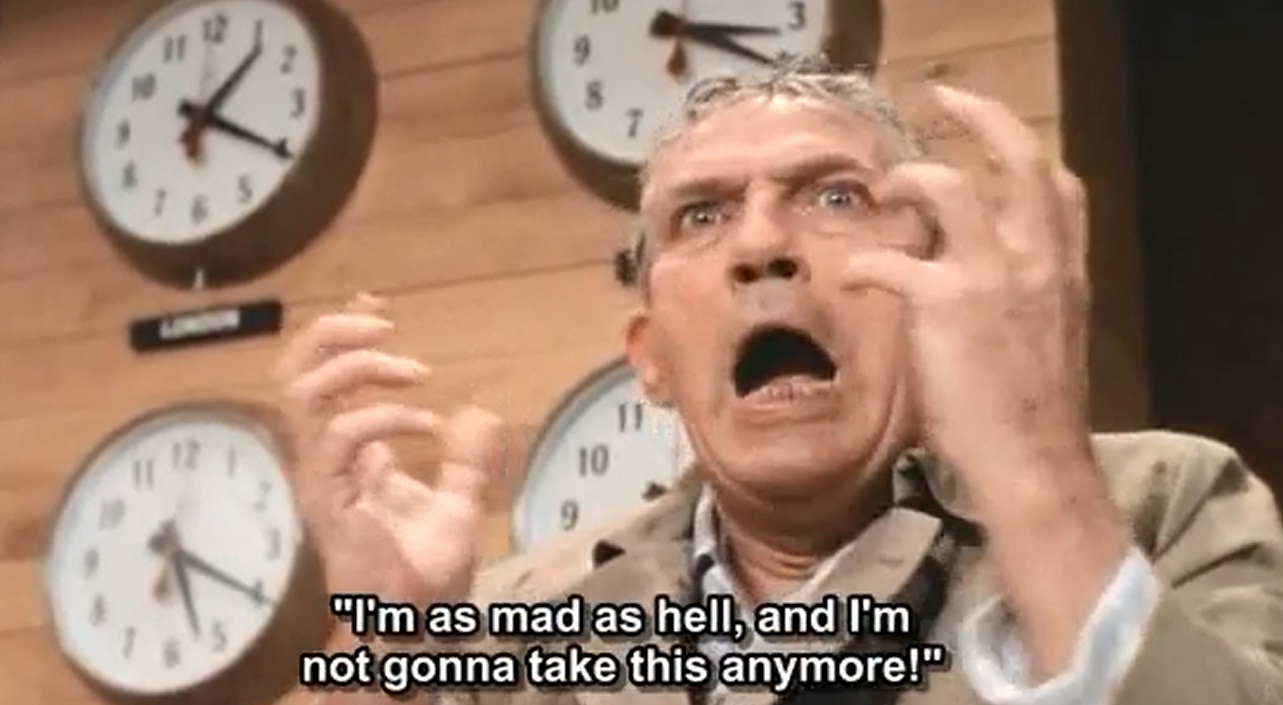 Howard Bloom, Yale literature professor and cultural critic, recently stated “I am 79 years old and I have never seen this country in such a bad state. It is madness. What we are seeing is the fall of the Roman Empire, only now it is the fall of America, the glory of our Empire.”

With the Chinese on the verge of owning your possessions and you and this arrangement was agreed to by people who were elected to “protect and defend the Constitution”, isn’t it time to get mad, mad as hell? In response to my four part series on the Chinese takeover of the country, many of you have written to me and expressed some very heartfelt consternation of the present set of affairs, There can be little doubt that America needs a rallying call to action if we are to reverse the destructive path we have embarked upon. The middle class is in desperate need of a spokesperson, somebody who could awaken the masses and spur an apathetic America to action. Who could provide this much needed clarion call? Will it be Glenn Beck? Or, maybe, Rush Limbaugh will heed the call and step forward. NOT LIKELY! Perhaps it will be Hannity. No way! Every one of these media figures are too mainstream and too entrenched in the existing system to effectively take the torch and lead America out of the abyss that it finds itself in. What if America did find its spokesperson? What would it sound like? What form would it take? Who could ever forget the classic move Network and the mythical broadcaster, Howard Beale, and his impassioned attempt to get America “as mad as hell” and not “to take it anymore!”

What if Howard Beale were to attempt to call America to action today? What would it sound like? It might go something like the following: “I don’t have to tell you that things are bad. Everybody knows things are bad. We are in the greatest depression of all time. Seven hundred thousand Americans lost their jobs last month and several million more are afraid of losing their jobs. Thanks to the FED, the dollar buys a penny’s worth; your local bank is only still open through the forced “generosity” of your hard-earned tax dollars in the form of bailouts in the biggest wealth distribution plan in all of recorded history.

Americans are ferociously collecting and storing massive amounts of ammunition in advance of the passage of the legislative gun control bill, emanating from the United Nations which has the full support of Obama. The government, too, is  rightfully afraid, afraid of the people has recently purchased 1.6 billion rounds of ammunition for DHS. Yet, amazingly, very few Americans are even bothering to ask why the government is so intent on separating Americans from their last remaining firewall of protection from its government, namely, their guns. We know the air is unfit to breathe, we are being sprayed by Chemtrails and our genetically modified food is unfit to eat. And we sit watching our TV’s as some local newscaster tells us that the Dow is approaching 6,000, the FDIC and Social Security are near insolvency, because of the NDAA, the government can secretly snatch you off the street and nobody knows what to do about it. We know things are bad—worse than bad—they’re crazy! It’s like everything, everywhere is going crazy. So, we don’t go out anymore because we cannot afford the photo radar tickets and the toll road fees. We sit in our soon-to-be foreclosed homes and slowly the world we’re living in is getting smaller, and all we say is, “Please, at least leave us alone in our living rooms. Let me have my satellite TV and  my MP3 and my smartphone, and I won’t say anything.

Just leave us alone.” “Well, I’m not going to leave you alone. I want you to get mad!” “I don’t want you to protest, the new DARPA weapons that would render the effort futile. I don’t want you to riot, NORTHCOM lies in wait. I don’t want you to write to your Congressman, because they are already bought and paid for by the forces that are already at work trying to enslave you. I don’t know what to do about the depression, the Russians and the Chinese and neither does Obama. I also don’t know what to do about inflation, your lost pension and the crime in the streets.” All I know is that first, you’ve got to get mad. You’ve gotta say, “I’m a human being, (bleep)! My life has value!” “So, I want you to get up now. I want all of you to get up out of your chairs. I want you to get up right now and go to the window, open it, and stick your head out and yell, “I’m as mad as hell, and I’m not going to take this anymore!!” Fortunately, most Americans are angry, terribly angry as evidenced by Congress’ 9% approval rating. Unfortunately, most of America does not know where to direct their anger or who is responsible for our declining fortunes and we are quickly running out of time.

Where is Howard Beale when we need him the most? Look in the mirror, YOU are Howard Beale and it is time to get as mad as hell!