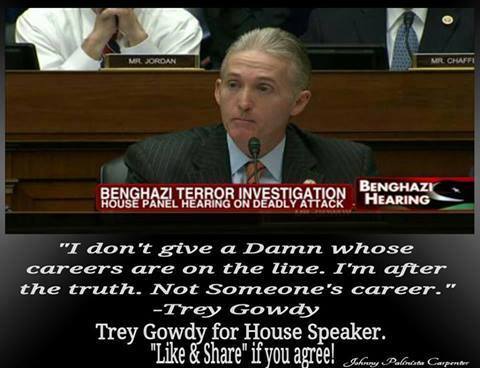 South Carolina Representative Trey Gowdy will lead a special committee to investigate the White House’s response to the Sept. 11, 2012 attack on the U.S. consulate in Benghazi, Speaker John Boehner announced.

Republican Gowdy, a member of the Oversight and Government Reform Committee, is a former federal prosecutor and is known as a sharp, effective communicator. According to Role Call, he is well respected by House conservatives.

“Trey Gowdy is as dogged, focused, and serious-minded as they come. His background as a federal prosecutor and his zeal for the truth make him the ideal person to lead this panel. I know he shares my commitment to get to the bottom of this tragedy and will not tolerate any stonewalling from the Obama administration,” Boehner said in a statement.

He added, “I plan to ensure he and his committee have the strongest authority possible to root out all the facts. This is a big job, but Rep. Gowdy has the confidence of this conference, and I know his professionalism and grit will earn him the respect of the American people.”

Gowdy, appearing on Fox News, said his first task to get all of the information available.

“I want to see every single solitary relevant material document. In fact I want to see everything for which there can be any argument it is relevant and then we can judge whether it is material,” Gowdy said in an interview with Fox News’ Greta Van Susteren Monday night.

According to FoxNews, Gowdy has received death threats.