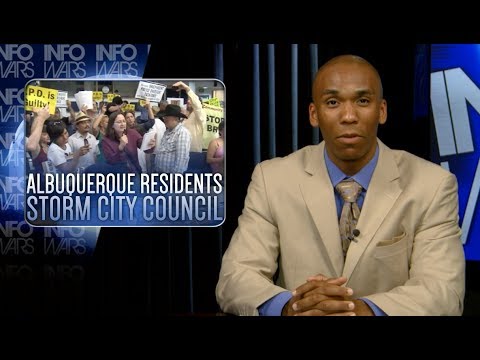 Albuquerque citizens continue to demonstrate that they have had enough of their increasingly violent police department. The Albuquerque Police Department has even had its acronym changed by residents to mean Another Person Dead. The long-standing dissatisfaction reached a new level following the blatant execution of a homeless man that was passed off as justified by police chief Gordon Eden. You can see the video here and judge for yourself whether proper force was used in this case of “illegal camping.”The APD is so out of control that even the morally bankrupt Department of Justice was forced into a two-year investigation that resulted in them acknowledging the systematic use of egregious violence and a laundry list of general misconduct. Despite DOJ’s “recommendations” to focus on additional training, better citizen oversight, as well as the threat of potential lawsuits, citizens seem intent not to wait for bureaucracy to correct itself; they are taking immediate action as you’ll see in the video below.Albuquerque citizens already have taken to the streets, but have largely been shut down by yet more violence as police have dispersed them with tear gas and have made arrests. Further proving the point of the need for sustained citizen action, even after this violent clash another man was killed under suspicious circumstances following that protest.

This is not the case of a few bad apples either. Throughout the inquiries into police misconduct, as well as the calls from citizens for reform, APD police chief Gordon Eden has been a full apologist for all that has happened thus far. Moreover, a new training manual essentially encourages heightened confrontational behavior from police toward Albuquerque citizens, and has been hidden from public scrutiny.Statements made by Chief  Eden following the execution of Boyd sounded like a glowing endorsement for further similar action:

Chief Eden called the shooting justified at the news conference, saying officers used non-lethal force first and that there was a direct threat made at an unarmed K9 officer. According to Chief Eden, Boyd was less than eight feet from the unarmed canine officer.

“Actually if you watch the video tape, all the less than lethal devices were in fact deployed. It was when the canine officer was down directing the canine dog that the suspect pulled out the two knives and directed a threat to the canine officer who had no weapons drawn. He was handling the dog,” Chief Eden said.

News 13 asked Chief Eden directly, “do you believe this was a justified shooting?”

Chief Eden responded, “Yes, if you follow case law, ‘Garner versus Tennessee’, there was directed threat to an officer.” (source)

Eden has now become the primary target of citizen anger, as it is clear that there will be no immediate reform forthcoming without intensified pressure.Contrary to earlier characterizations by the police of thugs being responsible for the uprising and violent clashes, the protest group is diverse; you will see that it was an assistant professor at the University of New Mexico who took the lead:

…protesters took over Albuquerque City Council Monday night calling for immediate change at APD and the ousting of both Albuquerque’s Police Chief, Mayor and more.

Protesters even called for the arrest and issued a “people’s warrant” to APD Chief Gordon Eden.

“This is no longer your meeting, this is the people’s meeting,” protester David Correia, an assistant professor at the University of New Mexico, said into a commandeered microphone as shown in the KRQE video below. “We now serve a people’s warrant for arrest on Albuquerque Police Chief Gordon Eden.” (Source)

This is a clear demonstration of the power that citizens can exert in a defiant but peaceful manner, putting pressure where pressure is required and demanding accountability instead of more reports and investigations.  We’ll continue to keep a close eye on these developments in Albuquerque.*If you are a resident of the city, or if you have additional on-site information, please contact us and we will add to future updates.