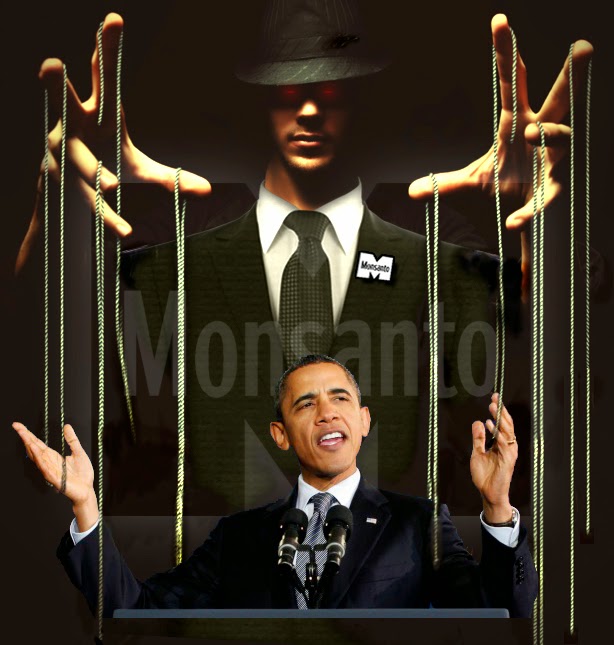 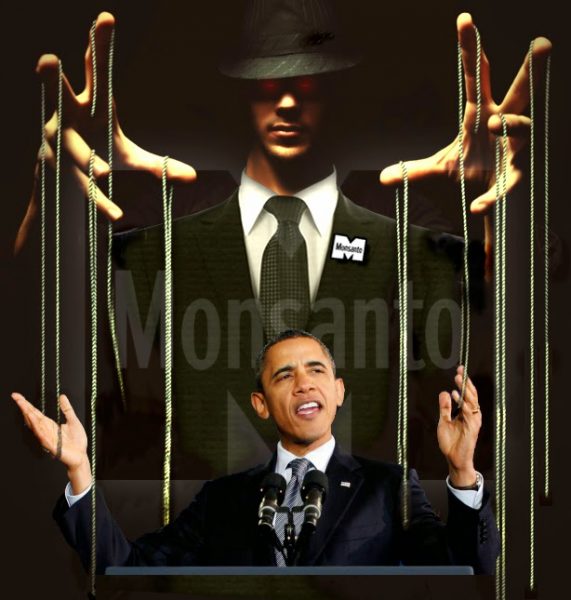 Under the selective radar of mainstream media, Barack Obama has been carving out a whole new level of support for Monsanto and other destructive biotech giants.  From Scott Creighton, “Obama Pitches India Model of GM Genocide to Africa”:“At the G8 Summit held two weeks ago at Camp David, President Obama met with private industry and African heads of state to launch the New Alliance for Food Security and Nutrition, a euphemism for monocultured, genetically modified crops and toxic agrochemicals aimed at making poor farmers debt slaves to corporations, while destroying the ecosphere for profit.“But African civil society wants no part of this latest Monsanto aligned ‘public private partnership.’ Whatever will the progressives do now that their flawless hero has teamed up with their most hated nemesis [Monsanto] to exploit an entire continent like they did to India not that long ago?…“With a commitment of $3 billion, Obama plans to ‘partner up’ with mega-multinationals like Monsanto, Diageo, Dupont, Cargill, Vodafone, Walmart, Pepsico, Prudential, Syngenta International, and Swiss Re because, as one USAID representative says ‘There are things that only companies can do, like building silos for storage and developing seeds and fertilizers.’“Of course, that’s an outrageous lie. Private citizens have been building their own silos for centuries. But it’s true that only the biowreck engineers will foist patented seeds and toxic chemicals on Africa.”

Under the guise of replacing the “donor-recipient model” of charity with “smart business development that’s a win-win for everybody,” a new level of corporate-government colonialism is aimed at the continent of Africa. The new and improved strategy means bigger profits for the few and greater suffering and displacement for the many.Support self-sufficiency for the small farmer? Expand the number of small farms growing nutritious and non-toxic food? Never heard of it. Not on the agenda—except in false propaganda statements and promises.No, instead, the idea is putting small farmers into debt to Monsanto for GMO seeds and highly toxic herbicides, so they can grow (until they go bankrupt) noxious GMO food crops. Small farms will eventually be snapped up by big ag corporations.Obama? A warrior against corporations on behalf of the people? It’s long past the time for ripping that false mask away.During his 2008 campaign for president, Barack Obama transmitted signals that he understood the GMO issue. Several key anti-GMO activists were impressed. They thought Obama, once in the White House, would listen to their concerns and act on them.These activists weren’t just reading tea leaves. On the campaign trail, Obama said: “Let folks know when their food is genetically modified, because Americans have a right to know what they’re buying.”Making the distinction between GMO and non-GMO was certainly an indication that Obama, unlike the FDA and USDA, saw there was an important line to draw in the sand.Beyond that, Obama was promising a new era of transparency in government. He was adamant in assuring that, if elected, his administration wouldn’t do business in “the old way.” He would be “responsive to people’s needs.”Then came the reality.After the election, people who had been working to label GMO food and warn the public of its huge dangers were shocked to the core. They saw Obama had been pulling a bait and switch.After the 2008 election, Obama filled key posts with Monsanto people, in federal agencies that wield tremendous force in food issues, the USDA and the FDA:At the USDA, as the director of the National Institute of Food and Agriculture, Roger Beachy, former director of the Monsanto Danforth Center.As deputy commissioner of the FDA, the new food-safety-issues czar, the infamous Michael Taylor, former vice-president for public policy for Monsanto. Taylor had been instrumental in getting approval for Monsanto’s genetically engineered bovine growth hormone.As commissioner of the USDA, Iowa governor, Tom Vilsack. Vilsack had set up a national group, the Governors’ Biotechnology Partnership, and had been given a Governor of the Year Award by the Biotechnology Industry Organization, whose members include Monsanto.As the new Agriculture Trade Representative, who would push GMOs for export, Islam Siddiqui, a former Monsanto lobbyist.As the new counsel for the USDA, Ramona Romero, who had been corporate counsel for another biotech giant, DuPont.As the new head of the USAID, Rajiv Shah, who had previously worked in key positions for the Bill and Melinda Gates Foundation, a major funder of GMO agriculture research.We should also remember that Obama’s secretary of state, Hillary Clinton, once worked for the Rose law firm. That firm was counsel to Monsanto.Obama nominated Elena Kagan to the US Supreme Court. Kagan, as federal solicitor general, had previously argued for Monsanto in the Monsanto v. Geertson seed case before the Supreme Court.The deck was stacked. Obama hadn’t simply made honest mistakes. Obama hadn’t just failed to exercise proper oversight in selecting appointees. He wasn’t just experiencing a failure of short-term memory. He was staking out territory on behalf of Monsanto and other GMO corporate giants.And now let us look at what key Obama appointees have wrought for their true bosses. Let’s see what GMO crops have walked through the open door of the Obama presidency.Monsanto GMO alfalfa.Monsanto GMO sugar beets.Monsanto GMO Bt soybean.Coming soon: Monsanto’s GMO sweet corn.Syngenta GMO corn for ethanol.Syngenta GMO stacked corn.Pioneer GMO soybean.Syngenta GMO Bt cotton.Bayer GMO cotton.ATryn, an anti-clotting agent from the milk of transgenic goats.A GMO papaya strain.And perhaps, soon, genetically engineered salmon and apples.This is an extraordinary parade. It, in fact, makes Barack Obama the most GMO-dedicated politician in America.You don’t attain that position through errors or oversights. Obama was, all along, a stealth operative on behalf of Monsanto, biotech, GMOs, and corporate control of the future of agriculture.Jon Rappoport is the author of two explosive collections, The Matrix Revealed and Exit From the Matrix, Jon was a candidate for a US Congressional seat in the 29th District of California. Nominated for a Pulitzer Prize, he has worked as an investigative reporter for 30 years, writing articles on politics, medicine, and health for CBS Healthwatch, LA Weekly, Spin Magazine, Stern, and other newspapers and magazines in the US and Europe. Jon has delivered lectures and seminars on global politics, health, logic, and creative power to audiences around the world. You can sign up for his free emails at www.nomorefakenews.com