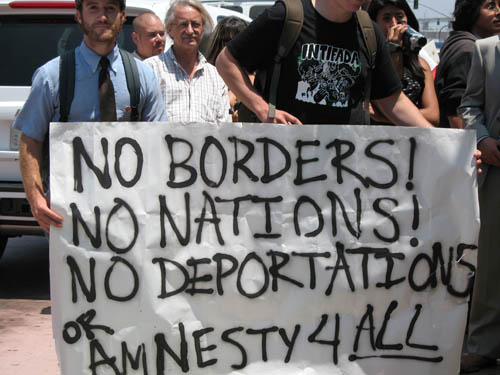 Where in the world, or in what country, can individuals who are not citizens or illegal immigrants, visit the capital city of that country and basically demand that country’s leadership make all illegal immigrants citizens? As most have guessed, it is the United States of America. That exact scenario played out last week when Rep. Paul Grijalva (D-AZ) invited illegals onto the Capitol Hill to bring a list of executive orders that President Obama should implement, which includes stopping deportations and reuniting deportees with their families that are in the US. Six illegal immigrants, along with an immigration attorney, comprise a “Blue Ribbon Commission” that unveiled a list of fourteen things Obama could do without congressional approval that would provide millions here illegally with amnesty.

Before getting to the list, let’s understand exactly what happened on Capitol Hill. An elected representative of the people, aka citizens of the United States, invited illegal immigrants, aka criminals or lawbreakers, to the Capital to urge the fraud in charge to dispense with immigration law so they can’t be sanctioned for their misconduct in breaking the US immigration law. Lawbreakers are allowed to commune with a member of Congress with impunity and make demands of America’s leadership while citizens receive a thumb-nosing, canned response from their representatives who lie to their constituents from the ivory tower, afraid to even face the people.

To really make things interesting, an illegal immigrant who has been in the country for 12 years, Maricelo Munoz, and had to speak through an interpreter, wants Congress and Obama to think about their cases with “humbleness and acknowledgment of the suffering and sacrifices” these people have made to be here. According to the report by CNS news, Munoz spoke with tears in her eyes. What were the tears for really – the sadness that she faces deportation for “driving without a license and fleeing the scene of an automobile accident;” the concern for those here illegally who want a better life for themselves while being equal under the law and are upstanding individuals, except for breaking the immigration law; or, a sympathy for the suffering and sacrifices that breaking the law entails. Maybe Munoz flowed tears for being sorry she got caught breaking the law, but not being the least bit sorry she broke the law.

According to CNS news:

The group, dubbed #Not1More, included Angel Hernandez-Gomez “a young undocumented and queer organizer from Durham, N.C.,” who is “committed to defending his family, and all women, trans people, sex workers and other people of color from the fear of deportation,” according to his biography distributed at the event.

Yes, this illegal immigrant who is breaking the law is committed to “defending his family” and a host of others from the fear of deportation. This host of others includes sex workers. As this was not clarified, one could assume it means illegal immigrant prostitutes – another sect of fine, upstanding, law-abiding illegals. The way Hernandez-Gomez declares his commitment to defending these lawbreakers, one would think they were unjustly denied equal application of US laws. With his bold statement printed in his biography, this illegal immigrant has covered all disparities the left is so fond of exploiting for their ideological purposes.

Here are a few of the fourteen recommended executive orders by this group according to CNS news:

The full list can be read at the Not1More website. Why don’t they just demand that the US cease enforcing all immigration laws? That is the basic premise of their “list of demands.” In fact, the object of their appeal has already limited the enforcement of immigration law; they just want the rest to go away as well so all of these “law-abiding illegal immigrants” can partake of the American Dream, which is not a house or car. These short-sighted individuals fail to comprehend, but then again they don’t want to comprehend, that the rule of law applied unequally leads to tyranny and despotism; and, their act of breaking the law is no more deserving of amnesty that someone who has committed murder.

According to Jessica Vaughn, director of policy studies at the Center for Immigration Studies, “This group is calling for an end to immigration enforcement and nullification of immigration laws – literally open borders, and not one deportation.” Vaughn contents that the group wants legal status for all illegal immigrants through executive action, “presumably with a work permit and access to social welfare services, as was given to 500,000 already” through DACA.

This so-called “commission” is filled with breakers of immigration law, with one being guilty of breaking other laws, who basically “demand” US citizenship because … well, because that’s what they want in order to avoid the repercussions of the law. These individuals are not interested in the American Dream of freedom and liberty. If they were, they would have followed the proper channels in order to gain entry into this country. What they did was sneak across the border expecting to live in America under the radar while the “multi-cultural supporting individuals” in this country worked to undermine US law. None of these individual here illegally are the least bit remorseful for breaking our laws; they are just sorry they got caught breaking other laws that result in deportation if the individual is discovered to be in this country illegally.

This situation goes to show that lawbreakers are representing US citizens, governing this country, and intend to turn this country into one of lawlessness, if that hasn’t happened already. The questions I have for Rep. Grijalva are: “If it’s okay to dispense with immigration law, why is it okay to uphold criminal and civil law? What makes this law deserving of being ignored over the others?” The answer to that is very simple: an increased voter base for Democrats that eventually lead to tyrannical, despotic, dictatorial government. Regardless of what trifle is peddled by Democrats or the multi-cultural cult, this is the basic premise – the downfall of a free country.