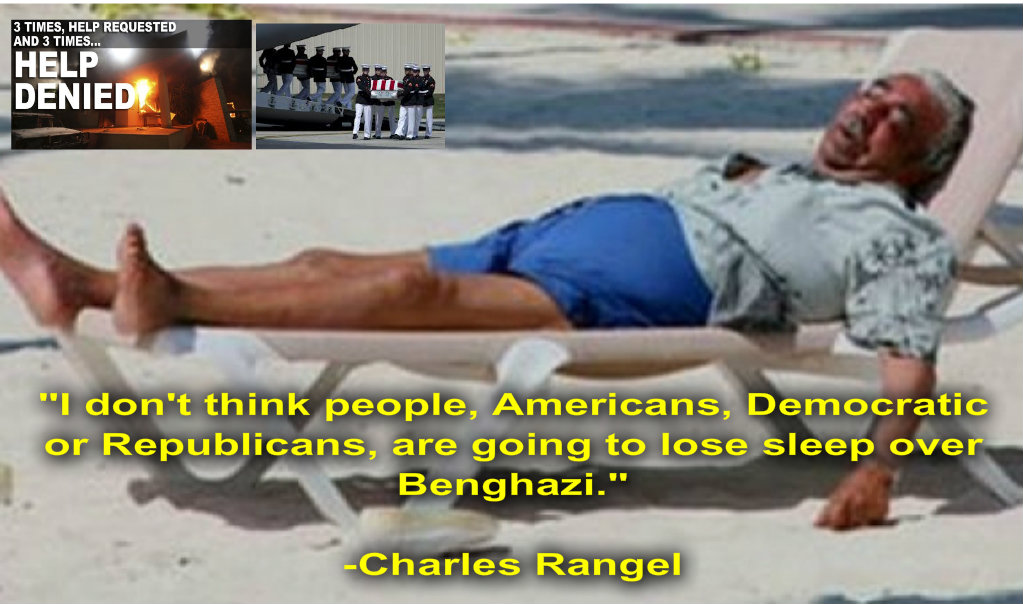 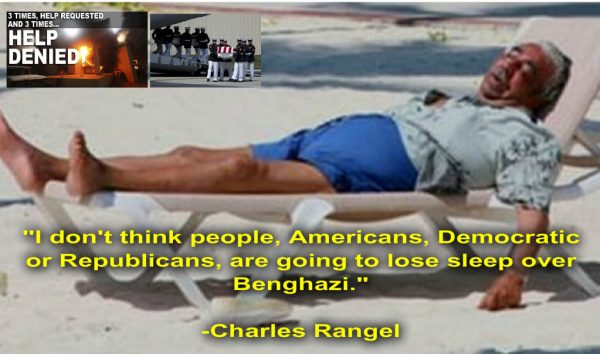 Rep. Charles Rangel, (D-NY) believes Americans will not and are not losing sleep over Benghazi, as he told Fox News’s Neil Cavuto last Thursday.

According to CNS news:

“I think it’s tragic that the Republican Party would destroy itself in 2016 by not having one issue that the American people believe should be a priority,” Rangel told Fox News’s Neil Cavuto.

“I don’t think people, Americans, Democratic or Republicans, are going to lose sleep over Benghazi. And I really think that they’re concerned about the economy and jobs and immigration. What I’m talking about is, is that if the Democrats are the only ones standing on their feet in 2016, America has lost.”

Rangel noted that Rep. Darrell Issa’s Oversight Committee “has had all of these hours and days and weeks and months investigating this, that now you’re saying you have no confidence in him, so you have to bring in a new member to head up a new committee to find the answers?”

Well Charlie, here’s a bit of insight for you in case you missed it.

First of all, Americans are losing sleep over Benghazi. There were four Americans that died at Benghazi that could have been saved, but were left defenseless because of inaction on the part of the government. Maybe, you should talk to their family members about losing sleep as their grief and loss have received no closure but continued rhetoric from an administration that still clings to lies in place of the truth on the events surrounding the attack on the American consulate. While you may be able to sleep soundly at night, treating Benghazi as just a memory, these survivors live with the reality of their loss every single day – it’s hardly a memory for them. This is a reason for these American to lose sleep Mr. Rangel.

Second, Americans are losing sleep over Benghazi. The tragedy that was Benghazi is the result of the failed policies of this administration and the ineptitude of Congress of which you are a member, I might add. Americans are facing the reality their government has become ineffective, corrupt and complicit in covering the truth while peddling lies. Americans, Mr. Rangel, have become distrustful of their President and their representatives – that includes you. While Americans are concerned about the economy, jobs and immigration, Americans are concerned about their freedom, liberty, their individual rights and a government that will uphold all of those, not trample them. A government that is complicit in acting as an accessory to murder – and, that is what this is Mr. Rangel – is a concern to Americans and a very real reason to lose sleep over.

Third, Americans are losing sleep over Benghazi, Mr. Rangel. Americans are concerned their own government, from the President down to the lowliest government employee, are aiding and abetting our enemies through covert activities hidden from public view. This activity is known as treason and is a very good reason to lose sleep Mr. Rangel. A treasonous government is no longer representative of the people. In case you have forgotten, this nation was established as a Constitutional Republic, whereby the people engage in self-government and the power of this government exists only by the consent of the governed. Americans do not consent to a government that engages in treason.

Fourth, Mr. Rangel, Americans are losing sleep over Benghazi. Americans have been witness to the total disdain of Democrats toward the American people as evidenced by their comments dripping with it regarding any issue surrounding freedom and Constitutional principles. While you maintain that an oversight committee chairman has been ineffective, you fail to mention that it is this administration, along with government agencies, RINOs and Democrats, that have thumbed their nose at this committee, failed to cooperate and out right refused to provide any information requested. It’s convenient to spout rhetoric when you think everyone has forgotten or is not paying attention. Well, let me clue you in – we are paying attention Mr. Rangel and your pitiful attempts at subversion are exposed.

Lastly, in case you need reminding, Americans are losing sleep over Benghazi. American families have members serving in our nation’s armed forces, consulate, embassies and attache services abroad. These families worry about their loved ones’ safety, the ability of the US government to do its duty to protect them and send aid should that safety be jeopardized. This administration has failed to demonstrate a commitment to those men and women should another incident arise. What this administration has demonstrated, Mr. Rangel, is a precedent for serving Americans up as a sacrifice to protect political careers, cover treasonous activities, and show a total lack of compassion for those serving, who have served, and their families’ peace of mind.

So, Mr. Rangel, before you open your mouth and declare a position regarding the American public, you should really think about your statements before making them. Of course, that would imply that you even have a brain, which from the looks of it, you are lacking. Unfortunately, Oz is a mythical place and wizards only exist in fantasy. However, scarecrows are very real and you, Mr. Rangel, are a scarecrow.