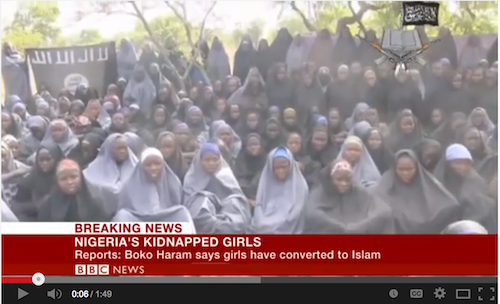 Video footage of approximately 100 Nigerian schoolgirls surfaced on Monday. The video shows the girls reciting the Quran in unison. Several large news outlets have published reports and videos but none seem to be able to confirm, with 100% certainty, that these are actually the girls that were abducted by Boko Haram.

The girls are dressed in traditional Muslim garb. All of this is significant because the media has been slow to offer the fact that a reported 90% of these girls are Christian. It would seem that the girls are being forced to convert to Islam, and if that is the case then one must wonder where the remainder of the girls are. Did they refuse to convert? Have they already been sold into slavery? Are they even alive?

In this AFP video a Boko Haram spokesman says that the girls have been liberated and are now Muslims. He also says that none of the girls will be released until his Boko Haram brothers are released.

Note: AFP is not allowing this video to be viewed on other sites. There are three other videos below so you can ignore it if you would like. If you want to watch it you will have to click on the “YouTube” logo in the bottom right corner. The video should open in a new tab or window and you can then return to watch the others.

Below are a variety of other news reports from Monday.

So are these in fact the girls abducted by Boko Haram?

As a Christian I have many thoughts going through my head. The fact that these girls are primarily Christian does not make it any more wrong than if they were of any other faith. But it does suggest that it is personal and this is the part the mainstream media ignores. Yesterday Pamela Geller reported a story of Boko Haram shooting 13 people that were in a church. All of them were shot in the head, after the obligatory “Allahu Akbars” were out of the way. Miraculously one of them survived despite being shot in the face. He lived to tell the tale.

It’s time to stop being politically correct. This is a case of some sick religious cleansing. That is the truth. That is what you need to know about this.

I don’t view this as a conversion. This is a religion that is still stuck in the dark ages. Centuries ago a lot of people “converted” to Catholicism as well, but people will do lots of things when their lives are threatened.

Unless this country starts to tackle the real issue the same choice might be brought to your daughter, or granddaughter, some day.