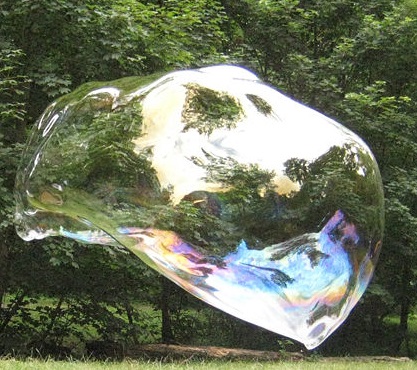 Everyone should familiarize themselves with the telltale signs of an economy in a bubble. It’s a valuable skill to have in a world where the average person has little influence on government policy, and the booms and busts of the economy are managed by a handful of elites at the Fed. You’re at the whims of forces outside of your control, so you have to know “when to hold em’ and when to fold em’” as it were. If you want to preserve your wealth in this world, you’ve got to know when an asset is stable and when it’s so inflated that a stiff breeze would be enough to send the whole thing toppling down.

It should come as no surprise to anyone who studies this subject, that the American economy is bursting at the seams. It’s really not much of a mystery anymore. The signs are all around us, and anyone who says otherwise is either uninformed, or a shill for those inflating the bubble.

When the stock market is soaring to new highs while unemployment remains stagnant, that’s a pretty solid indicator. When the housing market continues to gain ground while the number of people actually owning a home continues to drop, there’s a good chance that speculation is at play. When the wealthiest players in the stock market decide to quietly sell their assets, it’s safe to assume that they know something you don’t.

Then there’s the subtle signs. The indicators that are all around you, but would never make the news. This might be different for everyone, depending on where you live and work, and what you do throughout the day. For me, it was when I noticed a suspicious growth of new businesses in my community. Store fronts that had been empty since the housing market crash, were suddenly open for business again, seemingly overnight.

On the surface this appears to be on the up and up. After all, isn’t this what we wanted? New growth and better employment opportunities? It doesn’t feel right to me. It doesn’t feel real. By all indications, the economy is being held together with duct tape and string (i.e. quantitative easing). So why did a dollar store pop up down the street from me, in a storefront that had been empty for four years? To give you and idea of the absurdity of this, I live in one of the top 20 wealthiest cities in California. It’s practically an 18 square mile gated community. A dollar store? Really? Who’s putting down the capital for these new businesses all of a sudden?

Make of that what you will. I know my community, and I know what doesn’t “feel” right. If you look around your community you’re bound to find similar indicators. The evidence can be found on television as well. Do you remember those cheesy Lending Tree commercials? “When banks compete, you win”. Sound familiar? Remember this frighteningly prophetic commercial that was made at the height of the housing bubble?

For the first time in years I’m beginning to see a slew of new commercials for Lendingtree pop up. Only in a bubble economy, does a predatory and overpriced middleman like Lendingtree stand to make a profit. And don’t get me started on the ads for those “flip this house” reality shows, that are starting to show their faces again. That was a genre I assumed died with the last housing bust. Apparently not.

All in all, the signs of our bubble economy can be seen high and low. Being aware of them might just save your ahem…savings. If you open your eyes, you won’t have to look far.

Joshua Krause is a reporter, writer and researcher at The Daily Sheeple. He was born and raised in the Bay Area and is a freelance writer and author. You can follow Joshua’s reports at Facebook or on his personal Twitter.