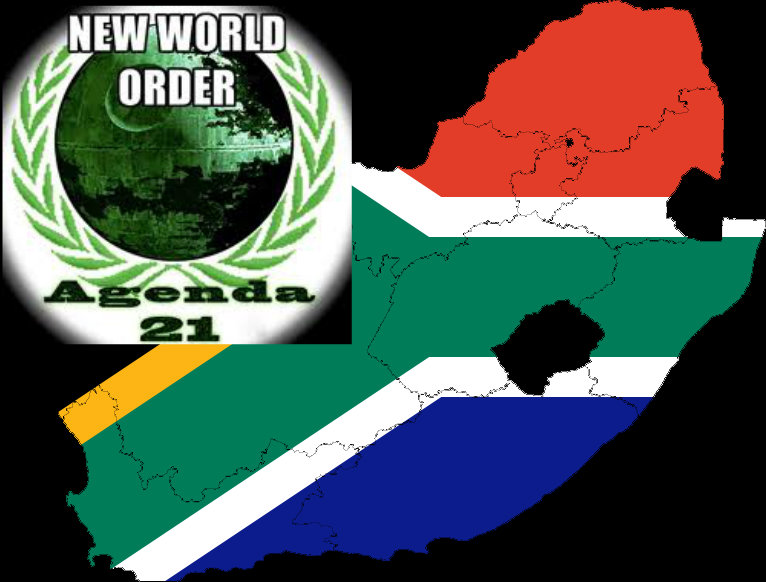 South Africa has it all, rewilding, UNESCO’s Education for All which has dumbed downed an entire population, prohibition to thin out forests which leads to massive flooding, protection of endangered species resulting in private property forfeiture, job promotions and school admissions based upon mindless racial quota systems, policies supporting depopulation and the installation of a system of living designed to destroy human motivation and the hope for a better future. Yes, Agenda 21 is gobbling up South Africa. And if America is not careful, South Africa’s hopelessness will soon become our national mantra as well.

In the last several weeks, I have received several communications from people living in South Africa. I have heard from a teacher, a professor, an engineer, a former police officer and a locally elected political official who contacted me through a third party in order to escape detection. All of these individuals found me as the result of my weekly radio show through our live streaming capability or through my radio archives. I come from a generation where I find this kind of international reach for a radio program broadcasted out of my home to be stunning. But even more stunning, is the total destruction of a country and its culture and that is taking place in South Africa. To a person, these people blame their adoption of Agenda 21 policies in one form or another.

One of the more popular Agenda 21 policies centers around herding people into extremely cramped and densely populated urban centers. In the United States, we are beginning to witness the introduction of micro apartments in places like San Francisco,New York City and Ft. Collins, where the living space does not exceed 500 square feet. However, in South Africa, they have turned their urban areas into a type of prison characterized by filth and squalor and extreme political control.

Many of the urban residents live behind high walls, there is electrified fencing and the properties are frequently guarded by the South African version of Blackwater.

Local police forces have been decimated and the citizens are living in fear of these privatized security firms who rape and rob many innocent victims in their jurisdiction. These security firms do so with impunity as the private security firms strictly serve the elite and their prime directive is to keep the people in line and in fear of the one ruling political party. Movement of people, especially at night, is tightly controlled. South Africa is becoming a Marxist “papers please” society.  Both educators and person who did not identify his occupation who wrote to me stated that if you are a white male and you are arrested by these private security firms, you have a very high probability of being raped in the holding cell.

South Africa is known as both the rape and murder capital of the world. American gay rights activists may want to pay close attention to what it is like to live in an Agenda 21 society. In South Africa, gays are murdered, particularly lesbians.

In America, farms and ranches are presently being seized through administrative fiat of Agenda 21 organizations such as the EPA. In South Africa, most farms do not produce food because their owners have been murdered by these Blackwater/Academi security firms. I cannot stop hearing Obama’s words echoing in my head as he promised America that he would develop a “private civilian security force” that is just as strong, just as powerful and just as well-funded as the military. This is what they have in South Africa and rape and murder rate speak to the wisdom of this globalist approach to law and order. There is nothing so dangerous to a totalitarian regime as an armed population capable of self-defense. The UN ideal of totally disarming the civilian population and leaving the masses vulnerable to the ruling party is nearly complete.

In most South African communities, firearms ownership is limited to a handgun and 100-200 rounds of ammunition depending on your local communities rules. There are several communities that have totally banned private gun ownership. Some communities are permitted to “rent” guns to tourists for limited hunting, but this is reserved for the elite and it is very expensive. There have been recent prohibitions against carrying anything on your person that might be considered a dangerous weapon. Objects as benign as key chains, cigarette lighters, pocket knives, and screwdrivers are banned in some communities.

In many areas, self-defense of property and self is not a guaranteed right. We have seen this insanity in England for some time where there are no “stand your ground” kind of codified self-defense statutes. In tightly controlled Agenda 21 communities, we are witnessing the fact that the government can be the only purveyor of force and violence even in self-defense.

In South Africa, parents don’t dare let their children go to play in the park or walk to local stores anymore. All of the South Africans who wrote to me have told me that is it’s just too dangerous to let your kids play outside and many of the missing children end up in child sex-trafficking rings. The privatized security firms transport the children and they are suspected of abducting many “blond haired and blue eyed children”.

America, is this beginning to sound familiar? As an aside, I am presently working on a story which will demonstrate how a government official with a security clearance had her child stolen by CPS, for not touting the liberal agenda at her place of employment and there is evidence that the child is being sex-trafficked. This is what Agenda 21 brings to a community. This is what happens when out of control thugs become your local policemen and they are not truly accountable to any civilian oversight.

The Dumbing Down of the Masses

Last night, my wife attended a math curriculum night at my son’s middle school. Many parents were calling for the end of Common Core for all the previously identified reasons. By the way, my son’s middle school is the number one ranked middle school in Arizona and the majority of the parents are highly educated. Common Core emanated from UNESCO’s Education for All. Just like its predecessor, No Child Left Behind, education is being eroded in this country through no fault of the teachers and the administrators who are required to follow the senseless mandates. The South African version of Common Core has also had a devastating effect on education.

Just as is the case with American students, South African students, once the pride of Africa, have been dumbed down to the level of near illiteracy. After reading the personal anecdotes of parents experience with South African education, their government is much further along in the dumbing down of their population through the introduction of education programs which arise out of the United Nations.

Quota systems are preventing many white children from going to a university. Many white children are forced to go abroad to study, if their parents can afford it. I am sure that many of you recognize these policies as classic divide and conquer strategies designed to pit one group against another so the people do not unite across racial and economic lines against the totalitarian and inhuman policies of Agenda 21.

In South Africa there are quotas for almost all aspects of professional life. Two people told me that one cannot study to be a veterinarian or a nurse if you are white. Quota systems have knocked white applicants to the bottom of the hiring preference ladder if they are white. Firms that are owned by white contractors have lost their right to bid in deference to people whose firms are owned by people of color. The popular refrain that many wrote to me about is what is popularly referred to as “Black economic empowerment” rules.

One South African wrote to me and said that he wanted to give me a feel for what is coming to America and what it’s like to live in a Marxist country which is dominated by Agenda 21 policies.  One theme dominated these communications and that is wealth redistribution on a grand scale.

Here is an excerpt from another South African who emailed me just yesterday:

“It is very difficult to get a firearm in this country if you are white. It is a long process and you basically have to prove to the police that your life would be in danger without one. You That definition is defined by the police.

Our public schools are totally dysfunctional…You may not maintain your own culture. What this means is that our standard of education has collapsed and there is no discipline in schools. Our grade 12 pupils can barely read or write, yet these same people are given access to universities.

We have had thousands of our farmers murdered and raped and thousands of commercial farms have been given to “previously disadvantaged people” and 98% of those farms no longer produce anything.

Our road are in a state of disrepair and 1.3 million people pay 85% of all taxes of which they receive no benefit.

Our third largest political party is openly Marxist and the national song is “Kill the farmer”. This is what our current president sings at his political rallies. Our seconds largest party is socialist.

What’s worse is the absolute apathy of the people that live here. Most people have no idea of the different stages of a communist takeover and just accept that living like this is just the way it is. You are labeled as negative or a racist as soon as you mention this in any public forum. I thinks most of us are just hoping that something will change, but we don’t want to know the truth.

I just wanted to give you a small idea of what life is like in the new South Africa.”

Can anyone knowledgeable person look at these variables in South African society and not see the trend curve happening in the United States?