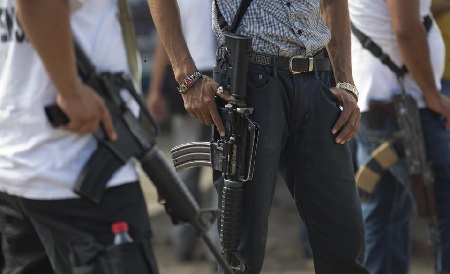 It’s incredible what human beings will put up with before asserting  themselves. The vast majority of people on this planet live in conditions far below what we have attained in the West. In part, it’s a testament to the human spirit that we are capable of enduring scarce food, contaminated water, and rampant disease throughout much of the world. What happens though, when your standard of living is being actively destroyed by other humans who are nothing more than vile thugs? What is the breaking point for the average person?

Around this time last year, residents of the Mexican state of Michoacan stood up for their rights and livelihoods, against the corruption of their government, and the extortion of the Knights Templar drug cartel. After arming themselves with whatever weapons they could find, including hunting rifles and slingshots, the untrained citizens banded together into small militias and started arresting or killing anyone associated with the gang. So far they have successfully driven out the cartel from their homes, something the government had long failed to do. So what were the conditions that drove these people to finally stand up for themselves? According to the Washington Post article linked above:

“The area’s lime growers, for example, were taxed by metrics that included acreage, limes harvested and crates packed. The meager wages of the lime pickers were also taxed, along with the bus fares that they paid to get to the groves. Gang members taxed sacks of corn and the tortillas made from them. A man installing a floor in his house soon had a gang member at his door, demanding a fee. A man who ran a restaurant said the cartel began taking a cut of the coins in his jukebox.”

The final straw for one of the founding leaders of the movement, Doctor Jose Morales, was particularly harrowing:

“They kidnapped my sisters. They tried to kill my wife and my children. And when they started going into the schools and taking the baby girls, 11-year-olds, 12-year-olds, that was my breaking point.”

Since then, these grassroots militias have successfully taken back their communities, and are now well organized and well armed with weapons confiscated from the cartels. The government, likely embarrassed by the bold success of the movement, has decided to demobilize the militias by demanding they register their weapons, and join a new rural police force.

While some folks have gone along with the registration and joined the newly sanctioned force, many members of the movement have refused to comply. They fear, as many Americans do, that registration will lead to confiscation. If they lose their weapons, the cartels will likely return with a vengeance against the unarmed populace. The movement has now rifted between those siding with Doctor Morales, who wants this armed and decentralized movement to spread across Mexico, and those joining the government’s token police force. Time will tell how all of this will pan out, but it’s a pretty fantastic start for a country with some of the strictest gun laws in the Western hemisphere.

Here we have ordinary people, publicly brandishing weapons that could easily earn them a lengthy prison sentence. By banding together and refusing to comply, the government’s only recourse to avoid embarrassment was to put them on the payroll and beg them to go quietly. I can’t help but notice a correlation with the Cliven Bundy situation on our side of the border. It turns out that when small groups of people arm themselves together, and take a purely self-defensive stance against the government, the authorities are helpless and dumbfounded. They don’t know how to approach the situation without making themselves look like desperate tyrants. The best they can do is retreat from these courageous people or hire them.

What a delightful and precarious situation for the gun grabbers. They thought they could separate us from our natural right to defend ourselves. But when the defenseless reach their breaking point, they can take back their rights against any odds. These people have stood their ground against their incompetent government, and the brutality of the drug cartels. So far they’ve won. Lets hope it continues to play out this way for years to come.

Joshua Krause is a reporter, writer and researcher at The Daily Sheeple. He was born and raised in the Bay Area and is a freelance writer and author. You can follow Joshua’s reports at Facebook or on his personal Twitter.