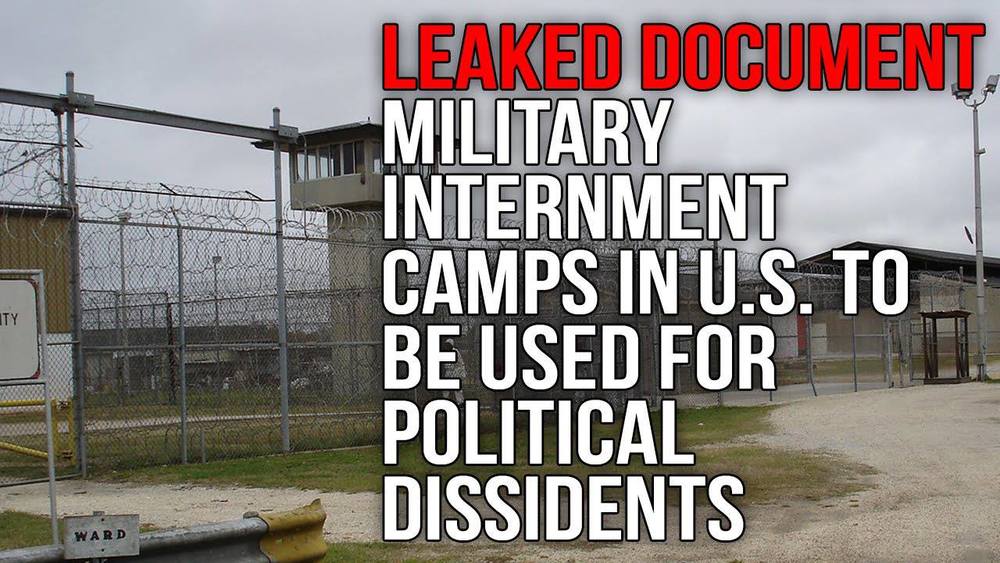 I have never received more vitriolic email since I ran the John Moore declaration about Russian commandos coming into this country. However, I have received several emails from service personnel confirming exactly what Mr. Moore is claiming. You need to read the following email, word by word, and compare it to military documents that are cited below.  Here is an example:

I am a former USMC Staff Sergeant that served at Camp Lejeune NC with 1st Bn 8th Marines. All of the training exercises you have been talking about are all true, I have personally participated in them in Virginia at Fort Pickett and on Camp Lejeune. Camp Lejeune constructed a multi million dollar training facility deep inside the artillery and heavy weapons firing K ranges. Attached are PDF files that I had from training exercises that shows the layout of the facility and the future expansion plans for the MOUT Facility. We were told this was supposed to be Iraq or Afghanistan, but it sure looks like hometown USA to me. It has a complete underground sewer system and many multi story buildings made of western style building materials not half shoddy construction to save money or time or Middle Eastern style. It’s a replica of a small western style town (Id say American since the signs were in ENGLISH). How many Arabic/Middle Eastern towns in Iraq or Afghanistan have a Baptist church and an American high school in them? They have been training FOREIGN TROOPS at this facility and Federal and Local Law enforcement as well. While I was at Camp Lejeune, I personally saw and talked to many UN, NATO troops, and DHS. I have additional material if you are interested and the training guidelines that the military is training the police/DHS with under DOD Directive 302521.

I have more than a dozen emails such as this from American military personnel who understand who they are supposed to be serving.

And what about this???

Jesse Hathaway wrote for MediaTrackers in which he said that a recent Ohio State National Guard exercise “reveal the details of a mock disaster where Second Amendment supporters with ‘anti-government’ opinions were portrayed as domestic terrorists.” Hathaway’s article went on to say that the “Ohio National Guard Communications Director James Sims II, MediaTrackers claims, told the website that it was “not relevant” as to why conservatives may feel targeted by being portrayed as anti-government extremists”. “Okay, I’m gonna stop ya there. I’m going to quit this conversation,” Sims told the site when reached for comment. “You have a good day.” Straight from the Internment/Resettlement article (FM 3-39.40 1-5) it states the following:

Whether you believe there are Russian troops training on our soil, along with other UN “Peacekeeping” troops is an irrelevant argument at this point. The above excerpt makes it clear regarding the INTENT to use “multinational partners” to round up and detain American citizens. Whether you believe that John Moore is correct about Russian commandos coming in the country, you better be real concerned with the language and pronouncements in this article!

The following is a list of involved agencies involved in the soon-to-be roundups of American citizens who are not drinking from globalist Kool-Aid.

There can be no doubt as to the meaning of the above quote from the manual. This government plans to enlist the aid of foreign troops in conjunction with the UN, DHS and FEMA for the purpose of rounding up and detaining American civilians.

I have previously been told by military sources that when families are transported to the I/R camps, husbands will be segregated from wives and children from parents.

“Detainees may also be segregated by ethnic and family groups and further segregated to protect vulnerable individuals. Additionally, detainees may be categorized by behavior (cooperative, neutral, or combative) to accurately resource guards and facilities”. Juveniles within the I/R population are typically segregated from the general population. (See DODD 3115.09.)

You Are An Enemy Combatant

Most of us who are detained in these I/R camps will be classified as enemy combatants. The following reads like the MIAC Report on steroids.

1-15. An enemy combatant is, in general, a person engaged in hostilities against the United States or its coalition partners during an armed conflict. (JP 3-63) Enemy combatant includes EPWs and members of armed groups.

1-16. Enemy combatants are divided as follows:

An enemy prisoner of war is a detained person who, while engaged in combat under orders of his or her government, was captured by the armed forces of the enemy.

The last sentence is frightening. It says that anyone who supports acts against the United States or its foreign mercenaries, is not entitled to humane treatment under the Geneva Convention. An offense against the US government could include the failure to turn in your gun or to not pay your taxes. This also opens the door to torture and summary extermination as you will not likely have any rights. For those who think this is an exaggeration, ask yourself what does “do not meet the criteria defined within the Geneva Convention relative to the treatment of prisoners of war”, actually mean?

We already know that the present administration holds the US Constitution in complete disdain and utter contempt. Do you remember the domestic terrorist designations which are contained in the MIAC Report?  An authority not recognized by this criminal government would include Libertarians, Constitutionalists, a former Ron Paul supporter, a Bible believing Christian, a Second Amendment supporter and a veteran. If you belong to any of these groups, you are a domestic terrorist, an enemy combatant, a sovereign citizen and a stateless person.

The Legal Justification to Snatch You From Your Home The following definition of an “evacuee” should concern all Americans. The definition of the term indicates the right of the military to remove a citizen from their home.

“Evacuee. An evacuee is a civilian removed from a place of residence by military direction for reasons of personal security or the requirements of the military situation.” (JP 3-57)

Do you remember when the globalists began to use the term “sovereign citizen”? This term was applied by DHS to Americans who claimed that they followed the Constitution, but not the “legitimate” governmental authority. The first time that I saw the term utilized by the government was in the Stacy Lynne case in which this anti-Agenda 21 activist had her son stolen by a NWO Judge, Julie Kunce Field, without so much as an allegation of parental wrong doing. This former World Bank and IMF consultant, turned judge, referred to Stacy as a “sovereign citizen”. As a result, Stacy was not allowed to call witnesses or object to the illegal practices she was subjected to while in Fields’ courtroom on the basis of any of the “constitutional violations” of law. This is because Field labeled Stacy as a noncitizen, a stateless person. The following defines a sovereign citizen as a stateless person.

Stateless Person. A stateless person is a civilian who has been denationalized or whose country of origin cannot be determined or who cannot establish a right to the nationality claimed.

If one is a stateless person, they are, by default, an enemy combatant. I have been assisting the Larimer County resident, Stacy Lynne, for 29 months. Stacy has not been able to see her son for a year and a half. I always wondered what kind of chicken outfit could steal someone’s child without cause. When I read this I/R manual, my eyes were opened and chills went up and down my spine. What was done to Stacy was accomplished because she was an anti-Agenda 21 advocate. And through the complicity of this globalist judge, Stacy was declared to not be a citizen and, as such, was not entitled to any Constitutional protections because a “sovereign citizen” is in effect a stateless person.

When martial law comes to our land, we will be snatched from our homes because of our collective verbal and behavioral resistance to the tyranny that is sweeping our land. We will be met by the likes of  the self-appointed authority that globalist judges like Julie Kunce Field represent. These despots will use their unconstitutional powers to declare a wide swath of Americans to be stateless, or sovereign citizens. This mentality already exists in places like Ft. Collins, CO., and in Austin, TX. They are already practicing to enslave you and the drills are going on inside of our country as I write these words.  Soon, the entire nation will be declaring any perceived dissident to be a sovereign citizen.

All of us are Stacy Lynne. The NDAA is for you and for me. By virtue of the fact that you have visited this website, or a website that linked into this website, your every keystroke has been cataloged by the NSA and you and your family have been declared to be non-citizens and are targeted for forced Internment/Resettlement at some future date. This will most likely occur following a false flag event.

In the eyes of this criminal administration, we are all enemy combatants. We are all “sovereign citizens”. We are all stateless people not protected by either the Constitution, in the pre-arrest period, or, by the Geneva Convention, in the post-arrest period. In the next part of this series, I will spell out what losing your Geneva Convention rights will mean to you and your family. You will never stand before a judge and jury and have your freedom stripped from you. You will likely be taken from your home at 3AM, loaded into a transport vehicle with other designated sovereign citizens with only the clothes on your back, and shipped to your final designated I/R camp. Don’t forget what you have already seen in terms of documentation, each one of your family members will be sent to a different FEMA Camp.