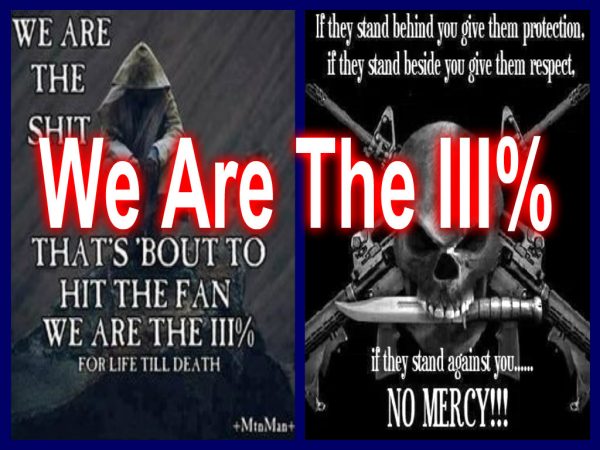 During the Revolutionary War against the British, it is said that only three percent of the population were involved in trying to win the nation’s freedom.  That number reflects the percentage of patriots that actually volunteered to fight. There were many others, of course, that supported the cause, and contributed in other ways, but sadly, there was a huge percentage of Colonial Americans that sat on the sidelines with no opinion on the matter. There were even those who wished to remain loyal to the British Crown. While that may be difficult for some to fathom, it is true, and in some ways we find ourselves in an eerily similar situation today.

The vast majority of Americans have absolutely no idea what is going on in this country, nor do they even care. Among these people, are those who believe in centralized authority and support causes that undermine the very freedom our forefathers fought to secure for them; a system of government, I might add, that protects their rights to do so. These people are feverishly working to replace our constitutional republic with a so called “social democracy,” which, in all honesty, is just a nicer way to say “socialism.”

Just as it was in the late 1700’s when a brave few had the courage to declare people should be free, only a few are aware of the perils we face today. As we attempt to bring attention to the massive usurpations of power committed by our government, they attempt to demonize and ridicule us by calling us terrorists and extremists in an effort to win a public relations war.

Unfortunately, the masses are so inundated with entertainment propaganda, and have been so conditioned to just go along instead of questioning authority, that they are falling for it. Their attitudes towards the nation and the freedom our troops have fought for is contemptible, and as we face the ever encroaching grip of authoritarianism, I can’t help but feel that’s what this nation deserves because it has forsaken all that our relatives have fought and died for. No American service member ever volunteered for war, believing they were fighting for socialism folks. There are some very disturbing events occurring in our nation and in this article I am going discuss the latest developments.

Those paying attention, the tiny three percent, realize that we are rapidly becoming a militarized police state. This is one promise that President Barack Hussein Obama (the name sends a chill down my spine) has kept. He has created a civilian security force that is just as well funded, and just as powerful as the United States military by arming every single government agency. The latest to join the ranks is The United States Department of Agriculture.  They recently request of “submachine guns” with 30 round magazines and ballistic body armor.  How the majority of Americans are not alarmed by this is disturbing in and of itself, but that’s beside the point. They did not request this armament for target practice folks. You would think that liberals, and their phony quest for human rights, equality and freedom would be up in arms over this. The silence, however, is deafening. While many people may scoff in disbelief by this alarming news, or ask why the USDA would need such weapons, the reason is obvious to those paying attention, the tiny three percent.

In Morgan County Indiana, a Sheriff Deputy inadvertently let the cat out of the bag by describing the reasons the Sheriff’s Department needs to have militarized, mine resistant vehicles.  During an interview, Sgt. Dan Downing said the department needs these vehicles because of the combat vets returning home that could use IED’s to defeat police. (Uhh, he said what?) What does that mean?

Did Sgt. Dan Downing just admit that there will be a move made against war veterans? That would be consistent with the attitude the current administration has displayed towards the nation’s defenders. Since Barack Obama has been in office, veterans have been considered a potential threat to national security.  America, pull your head out of the sand a moment and realize that only a government that seeks to undermine the very system that sustains you would consider those that have defended it a “threat to national security.”

Rightwing Extremism: Current Economic and Political Climate Fueling Resurgence in Radicalization and Recruitment, a report released in 2009 by the Obama Department of Homeland Security, calls veterans potential terrorists for several reasons, one of which is returning home to little or no economic opportunity. Why is this not something America is concerned about? It’s probably because American Idol is on tonight. As is the case with everything else, only the tiny three percent seem to give a dam.

In Mexico, one of our Marines is being held prisoner because he got lost and accidentally crossed the border. He had legally owned firearms in the trunk of his car. Mexican authorities arrested him and threw him in a jail cell, and our state department has done nothing.

This is a government that bends over backwards to accommodate illegal immigrants, many of whom have committed horrific crimes in our country. They talk down to us and act as if we should be ashamed for suggesting they follow the rule of law and secure the border. Yet, one of our combat vets is being held in a Mexican prison and they do nothing. What makes it worse is the fact that I called Congressman Jim Bridenstein’s (R-OK) office and the girl who answered the phone was completely clueless that this was even happening. On top of that, she had the nerve to talk to me as if I was rude for suggesting that perhaps she should know. What are we paying these people for? Why would anyone care about one Marine vet being held prisoner in Mexico? After all, there are more important issues like amnesty to deal with, right America? Don’t worry, the tiny three percent will speak for him.

Finally, if this isn’t enough to get you to understand just what we face, then you deserve what you get. At the latest “White Privilege conference,” speaker Amer Ahmed says that resisting jihad is racist.  America, Muslims are murdering Christians overseas, (read another instance of this here,) demanding the implementation of Sharia Law in America, and demanding that we abandon our culture while they come here and attempt to make us seem racist for opposing their radicalism. America, if you are so blind that you cannot see where this is going, then you deserve it, period. If you are so bogged down by political correctness that you believe the people concerned about this are “Islamophobic” of “racist” then you are a fool; you are the byproduct of a system that set out to numb your minds so you wouldn’t be paying attention.

Many of you are probably not even aware of any of this. Others will call me a radical or an extremist for discussing it. Yet, the only people, at this point, whose opinion I even care about anymore are those that have been brave enough to take a stand; those who have stood to speak the truth about what is going on. We are not radicals or terrorists. In fact, we want what you want. We want our children to be able to grow up in a prosperous America without the burden of a $17 trillion debt on their shoulders. We want to live in a world where there is peace, and people respect the opinions and rights of others.

Sadly, the system, left to us by our founders, cannot exist if the masses are not paying attention to what is happening in the nation. Freedom requires vigilance and commitment to holding those we send to represent us accountable for what they do.  We have actually reached a point where the selfish desires of the population have caused them to forsake the freedoms we once enjoyed for false promises of security, and sadly, just as Benjamin Franklin said, we are now left with neither. Don’t worry, there are people who are committed to exposing fraud and corruption, and standing for liberty in the face of tyranny, the tiny three percent.