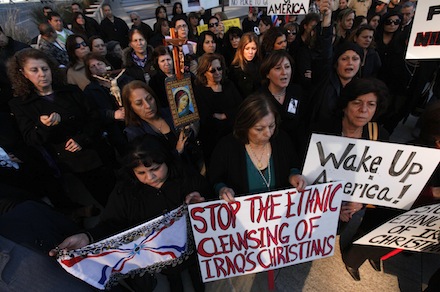 When the U.S. military “liberates” a nation, shouldn’t it result in more liberty, freedom and peace for the people living there?  Instead, we find just the opposite.  In fact, in every single case since 9/11, when the U.S. military has “liberated” a nation it has resulted in the persecution of Christians in that country becoming much worse.  In areas where we spent hundreds of billions of dollars and where thousands of precious American lives were sacrificed, churches are regularly being bombed, Christians are being brutally beheaded, and laws have been passed to make it illegal for a Muslim to convert to Christianity.  If we were not even able to provide the most basic of liberties and freedoms to the people living in those nations, what in the world did we actually accomplish by “liberating” them?

Just look at what has happened in Afghanistan.  We have been at war in Afghanistan for more than a dozen years, and yet things are so bad for Christians in that country at this point that there is not a single church left…

The supposedly “moderate” Karzai government installed by the U.S. upholds many of the draconian laws enforced by the Taliban—including the apostasy law, fiercely persecuting those who seek to convert to Christianity—and, in 2011, under U.S. auspices, it destroyed Afghanistan’s last Christian church.

We find a similar story in Iraq.  It is estimated that before the invasion, there were up to 2 million Christians living in Iraq.  Now that number is down to less than 450,000, and it is falling fast.

In fact, things are so dire for Iraq’s Christian community that some Iraqi Christian leaders are warning that Christians may soon become “extinct” in that nation…

As the mass exodus of Iraq’s Christians continues, so does the call for ending the plight of those who have remained. Like Iraq’s ancient Jewish community before them, one of the world’s oldest Christian communities may soon cease to exist.

The disappearance of Iraq’s religious minorities has been a troubling trend since the US-led invasion in 2003, and it has threatened to end the cultural diversity of Iraq. As the violence in the country spikes and religious intolerance grows, many Christians, Yazidis, Mandaeans and other minority community members are leaving the country.

Last week, the head of the Iraqi Catholic Church sent a chilling warning that Iraq’s 2,000-year-old Christian community is on the brink of extinction as new waves of Christians take the journey of exodus.

It is estimated that the Iraq war cost U.S. taxpayers more than 2 trillion dollars.

We spent more than a million dollars on one soccer field alone (which has now turned to dust).

In the end, what did we actually accomplish?

The Obama administration likes to brag about how it got rid of Qaddafi and “liberated” Libya, but now al-Qaeda is in control of much of the country and things are much worse for Christians than ever before…

Ever since U.S.-backed, al-Qaeda-linked terrorists overthrew Qaddafi, Christians—including Americans—have indeed suffered extreme persecution. Churches have been bombed; Christians have been tortured and killed (includingfor refusing to convert); and nuns have been threatened.

In Syria, the Obama administration is shamelessly allying with radical al-Qaeda jihadists in a desperate attempt to overthrow the Assad regime.

As these jihadists torture, behead and even crucify Christian believers, the mainstream media in the United States is virtually silent about it.

Why is the media being so quiet?

Well, because exposing what is going on would make the Obama administration look bad.

Those carrying out this persecution of Christians in Syria are being directly funded and aided by the governments of the United States and Saudi Arabia.  For much more on what is going on in Syria, please see my previous article entitled “Why Is The Media Silent About The Crucifixion Of Christians By Radical Jihadists?”

And of course it is not just in the Middle East where this kind of persecution of Christians is taking place.

While Hillary Clinton was Secretary of State, the State Department refused to label Boko Haram as a terrorist organization.

But now the whole world is talking about Boko Haram.  This group has attacked more than 700 churches in Nigeria over the past seven years, and this has resulted in a massive exodus of Christians from northern Nigeria to southern Nigeria…

Christian groups estimate that up to a quarter of the 4,000 people killed by Boko Haram since 2009 have been Christians, and more than 700 churches have been attacked in the last seven years alone, according to the Nigerian Catholic Bishop’s Conference. Across the troubled north-east, many Christian neighbourhoods are now ghost towns as tens of thousands of residents flee south. It is one of the biggest Christian exoduses of the century, yet largely unremarked outside of Nigeria.

It is hard to put into words how brutal Boko Haram can be.  As a recent article in the Telegraph described, the persecution of Christians in northern Nigeria by Boko Haram  has been absolutely relentless…

Arriving at St Joseph’s church in the Nigerian town of Gashua, Father John Bakeni knew he was taking on a tough posting. A flyblows settlement near the northern border with Niger, his new parish was smack in the heart of Boko Haram territory, and in the previous three years, all but a fraction of its 3,000-strong Christian minority had fled.

Sent by his bishop to show that the diocese had not deserted the town, he spent much of the following year trying to reassure the 200 remaining parishioners. But nearly every time he ventured from his rectory, a reminder would await him of the difficulty of his mission.

“Several times a week I would find a dead animal had been thrown in the compound, usually a chicken, goat or sheep, but sometimes dead cats too,” said Fr Bakeni, 38. “Stones would get thrown at the church almost every day, and sometimes also people would bang the gates and shout: ‘Infidel, we are going to kill you.’

So why has the Obama administration been so hesitant to speak out against Boko Haram until now?

In fact, although most Americans do not realize this, the Obama administration has been quite supportive of Boko Haram in the past.  Obama even actually threatened the Nigerian government with economic sanctions in 2013 in an attempt to keep them from cracking down on Boko Haram.

What in the world was the Obama administration thinking?

Whose side are they on anyway?

If you love liberty and freedom, you should be deeply troubled by the spread of groups such as Boko Haram.

Just look at what is happening in another part of Africa where jihadists have gained control.  In Sudan, a pregnant woman was recently sentenced to death by hanging for marrying a Christian man…

A Sudanese woman doctor who married a Christian man and who was convicted earlier this week on charges of “apostasy” was sentenced to death on Thursday, judicial officials said.

According to the Sudanese officials, 26-year-old Meriam Ibrahim, whose father was Muslim, was convicted on Sunday and given four days to repent and escape death. She was sentenced after that grace period expired, the officials said, speaking on condition of anonymity in line with regulations.

The BBC reported the woman’s death by hanging will not be carried out until two years after the birth of her child.

This kind of tyranny should not be tolerated in today’s world.

But instead, the U.S. government seems to be helping to spread it.

So exactly why is this happening?  Please feel free to share what you think by posting a comment below…