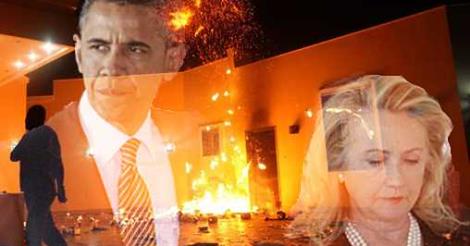 The attack on the US Consultant in Benghazi, Libya on September 11,2012 which killed Ambassador J Christopher Stevens and US Foreign Service information Management Officer Sean Smith, 2 CIA operatives (confirmed by then Secretary of State Hillary Clinton), and two Navy SEALs, SO1 Glen Doherty and SOCS Ty Woods was carried out by terrorist groups related to Al Qaeda.

The whole scenario of the Benghazi incident seems cut and dry to most Americans, our Consulate was attacked by terrorists, resulting in the deaths of 6 Americans. So why the lies and cover up from the Obama Administration?

The answer is because there is a lot more to Benghazi than meets the eye. First of all, this was a blatant attack on Americans, not a protest that got out of hand in connection with the YouTube video, Innocence of Muslims, as we were told by the Administration shortly after the incident.

Thirdly, pleas for help were ignored.

Lastly, the Administration continues to cover up and dodge questioning concerning the events in Benghazi.

The real answer to why the Obama Administration is covering this up isn’t just because of the seemingly incompetent reaction to the incident at the time, but because the Administration is trying to keep their acts of treason from going public.

Since Trey Gowdy was appointed to head up an investigation into the Benghazi incident, President Obama has since hired a criminal attorney. This in itself shows us that he knows this is going to be trouble big time.

The Obama Administration couldn’t very well help the Americans under siege in Benghazi because the very terrorist organization, Al Qaeda, responsible for it was at the time being helped by the US in the form of receiving arms, billions of dollars in aid, and actual military help. This had been going on since 2010 and really kicked in 3-19-2011 when US lead NATO forces invaded Libya, helping terrorist factions as Al Qaeda and the Muslim Brotherhood oust the Muammar Gaddafi regime.

The entire Arab Spring demonstrations and rise to power of terrorist organizations throughout the Mid-East during this time can be attributed to the US involvement.

The same is happening with the situation in Ukraine presently.

The Obama Administration’s rush to bomb Syria’s Bashar al-Assad Regime in the fall of 2013 was also to help his terrorist friends into power. These are the same terrorist organizations responsible for the deaths of Americans in Benghazi.

The fact that the Obama Administration was helping these terrorist organizations during the time of the Benghazi massacre and because the two Navy SEALs protecting the compound refused to stand down as told by the Administration also answers the question of why the military purge of top brass in 2013. The truth is Obama could not have the people in charge of making decisions at the top level who were privy to his acts of treason in Benghazi.

The closer to the truth we get via the Gowdy investigations, the closer we get to Martial Law. Benghazi and the Administration’s overall support of terrorist organizations around the world are the reasons for all the Executive Orders giving Obama complete control over all domestic activity. It’s also why such Socialist laws as National Defense Authorization Act (NDAA), giving the President complete control of everything, similar to a Dictatorship, was signed into law on 12/26/2013.

The President’s treasonous acts are also the reason we American citizens are the focal point in the NSA and CIA domestic spying over the last few years. We are the threat Obama has to keep an eye on because we, as citizens, will not tolerate having him in office when we know the extent of his involvement in traitorous activity around the world.

Gaslighting: Nightmarish Inflation Is Already Here But The Fed Is Denying That It Even Exists
June 24th, 2021 Sons of Liberty Media