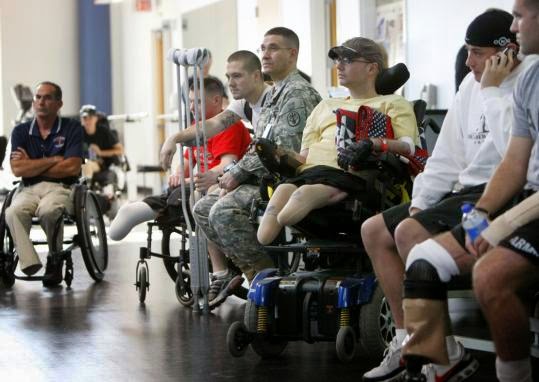 They fought for our country…their blood stains the soil of foreign enemy lands…and yet when they come home…many to a hero’s welcome…they are being denied rightful medical services.
Dysfunctional bureaucratic red tape unlike any stonewalling ever seen before now faces our veterans on a daily basis. And these brave warriors who put their very lives in harm’s way to keep us safe and free at home cannot get much needed medical care but a traitor to America can.
Recently, muslim sympathizer Chuck Hagel…the most miserable excuse of a Secretary of Defense we’ve ever had…approved convicted felon Pvt. Bradley Manning’s request to undergo hormone therapy and surgery to become a woman. The man found guilty of leaking classified government information (the Wikileaks scandal) is going to get what amounts to taxpayer funded gender reassignment surgery moving to the head of the line as our veterans…many of whom sadly come home NOT whole…sit and wait for services that might NEVER come.

And to that effect enter center stage the Veterans Affairs (VA) Healthcare Scandal along with its par for the course cover-up. This newest scandal amongst the many facing the Obama administration involves the hiding of unacceptably long wait times for vets seeking (or actually being denied) medical treatment they are rightfully entitled to. By the creating of 1.5 million ‘false’ records, this allowed the VA (comprised of 1700 hospitals and clinics across the country handling 80 million outpatient visits a year) to collect monies for care and services NEVER rendered, causing many veterans to die who might have been saved. By this action, I believe, the VA has actually assisted in what could be called ‘criminally negligent homicide’ as the Obama administration once again looks away even while Capitol Hill hearings into these charges is ongoing.

And as the VA says it has reduced wait times of outpatient appointments to within 14 days of a veterans ‘desired date’ request…which by the way is NOT true… allegations are being sounded by whistleblowers in Arizona, Colorado, Texas, and Wyoming about VA administrators actually ordering thousands of appointment requests by veterans to be placed on a so-called ‘secret’ unofficial list in an effort to improve their hospital’s performance record…hence their salaries…by basically shifting around appointments and manipulating wait lists to cover for what in reality is overly long delays for primary and follow-up appointments. And while allegations are being sounded that VA employees faced reprisals by administrators if they refused to manipulate appointment books, and as these very same administrators issued orders that if a veteran died while awaiting treatment their names were to be removed from the wait lists, a traitor to America moves to the front of the line to get sex change surgery.
There is something so very wrong with this picture…a picture designed and created to make the VA, and especially the administrators, look good on paper and NOTHING else. And looking good on paper translates into administrative salary increases, and sadly, that is the bottom line as far as they are concerned.

And as nightmare stories start to surface about veterans being denied medical services…like the one out of Arizona where dozens of patients at one hospital died (possibly as many as 40) while languishing on a hidden waiting list without ever being given an appointment….while officials at the hospital shredded documents and faked evidence to make it seem as if waiting times were under control…and the one that claims all this ‘supposed’ bruhaha is because the VA is NOT paying local doctors and hospitals in a timely manner…the VA does admits there is a problem, but a problem NOT of their doing as those in the Obama administration face genuine condemnation while continuing to play the ‘pass the buck’ game yet again.
Claiming the problem lies with the NON-VA Care Program…a program where the VA pays for veterans to go to local doctors or hospitals with an authorization letter (a voucher) where they get treated…payments to said doctors…of which the VA claims there are NOT enough of…and hospitals are often late causing some veterans having to be turned away.

So with Veterans Affair Secretary Eric Shinseki (a former general now the darling of the left for speaking out against the Iraq war) in the hot seat for claiming he knew nothing about the all-encompassing abuse in the VA under his command, he’s now spewing that he’s “mad as hell” about the whole affair. Words a bit late in coming if you ask me. And even though he read some talking points before the Senate Veterans’ Affairs Committee investigating the abuses…Shinseki claiming he’s working on fixing the problems is kind of a mute point as he does so while our veterans continue to be hurt and continue to die.
And who is called to task by Obama and crew for this most grievous of disservices done to our vets…just a few ‘faceless’ bureaucrats that have been placed on what’s called ‘temporary administrative leave’ and a scapegoat in the guise of Veterans Affairs Undersecretary, Robert Petzel, who tendered his immediate resignation NOT saying he was scheduled to retire very shortly anyway.
In other words our hurting veterans have been delegated to just another mere slap on the wrist by Barack HUSSEIN Obama and his crony Shinseki…as the man who closed the World War II Memorial to our aging heroes…as the man who found time to personally chastise an old racist’s wiretapped phone conversations from half a world away…that man has done NOTHING to help our vets as he sent his mouthpiece Jay Carney (who whined that there was “just a suggestion of a scandal” at the Veterans Affair Department) to read a prepared statement that he was “concerned and angry about the allegations.”

NO he was NOT and is NOT concerned about the pain and sorrow our veterans face, and his lack of concern proves for all to see that Barack HUSSEIN Obama has NO concern whatsoever for anything that involves helping those who fight for America on foreign soil.
And the bottom line in all this is that as per The Financial Times, “If the evidence of mismanagement continues to accumulate, the Obama administration will find itself not in another partisan knife-fight, but under fire from both parties in a Congress where the uniformed military is venerated.” And that on top of Benghazi might bring a long overdue end to a man and his administration who defame, dishonor, and slander our military…our troops…our veterans…every chance they get.