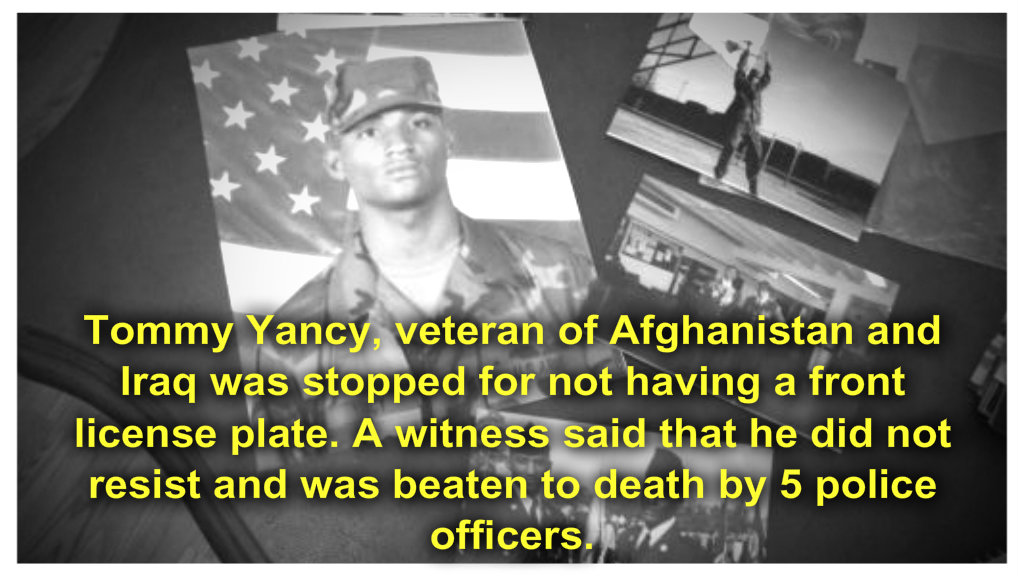 On Mother’s Day Tommy Yancy, father of two, was pulled over for not having a front license plate. What transpired beyond that point is not totally clear, but his injuries resulted in his death. Yancy, 32, was a veteran of both Iraq and Afghanistan.

There has been almost zero media coverage of the incident. A local publication, Imperial Valley Press, offers only a sidenote about his family raising money for his memorial and this:

The 32-year-old Yancy died following an altercation with law enforcement during a traffic stop May 11 in Imperial. The circumstances around the death and the traffic stop are still under investigation by the California Highway Patrol.

A source that wants to remain anonymous has come forward with a video and “WeAreChange” posted it to YouTube on Sunday.

The quality of the video leaves a lot to be desired, but a lot of information is provided in the “About Section” of the video:

Tommy Yancy, 32, father of two, was savagely beaten to death by five law enforcement officers during a routine traffic stop near the city of Imperial last Sunday, on Mother’s Day. Yancy, a veteran who suffered from PTSD, served in Afghanistan and Iraq in the 259th Field Service Unit following the 9/11 attacks.Yancy was stopped on his way to the store after a highway patrol officer spotted a missing front license plate on his vehicle. He was subsequently pulled from his car and attacked by a police K-9 unit, hit by a taser, and attacked by five officers until he succumbed to the beating and died. A witnessed, who filmed the incident, can be heard screaming on the recording: “How long before you guys call an ambulance? Call an ambulance!” According to the source of the video, who asked not to be named, his family has not been permitted to see his body, nor have they been given a cause of death.A close friend of Yancy described him as “shy, and a comedian” and told me, he was an “excellent dad, who kept in contact with his army buddies every week.” He also enjoyed basketball and loved hip-hop music. His sister-in-law, Jaqueline Hernandez, described him to me as “a very loving guy, loved his kids to death… they were his everything. Very funny down to earth guy, and loved by all”.Officers claim Yancy swung at an officer and attacked the K-9, however, near the end of the video, posted to YouTube on May 12 (https://www.youtube.com/watch?v=ZoqvX…), police are seen attempting to revive Yancy while a witness states, “All of this for one guy who wasn’t even resisting arrest,”. The officer is said to have received no serious injuries.Deputies with the Imperial County sheriff’s department were involved in another shooting last month, which took place on April 18. A teenager, Adrian Parra, was killed by multiple gunshot wounds. An honor roll student from Coachella Valley High School, Parra was described by loved ones as “a good person with great goals in mind.” The Sheriff’s department has refused to reveal whether or not the shooting was captured by one of their patrol car’s dashboard cameras. Two officers involved in the shooting were placed on administrative leave, but have since returned to their duties.

The witness claims that Yancy did not resist. The police involved, whether it be Imperial County, the California Highway Patrol, or both, will surely offer another story line. We can not assume that this entire account is factual. Maybe he did resist.

However even if he did resist and regardless of the details, it is hard to imagine a scenario in which a routine traffic stop should result in a man being beaten to death. Yet these stories are becoming all too common in today’s world.