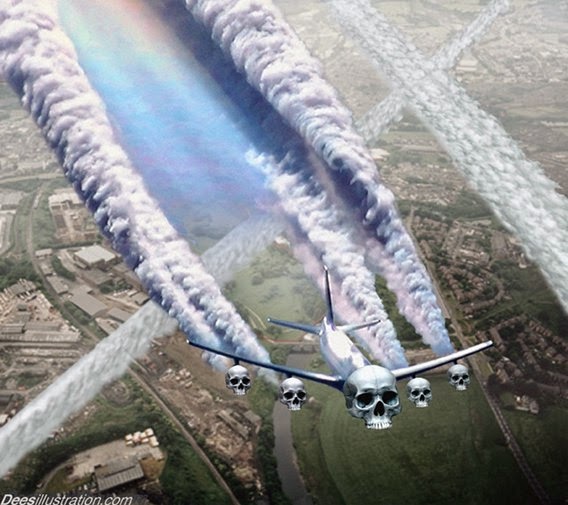 Several years ago after I became convinced that there is a chemtrail spraying agenda, I decided that I would not fly again, even though I would like to visit some far off places since, basically, I’m retired. My late husband and I enjoyed numerous trips abroad, so traveling by plane is not new to me, and I also did it for business trips too. However, I’ve decided to “walk my talk” and not financially support chemtrail spraying airlines since independent civilian airlines are contracted to spray chemtrails. Did you know that?Harold Saive documents commercial airlines spraying chemtrails in this convincing YouTube:

While watching Saive’s video, I jotted down the names of airlines shown spraying:

Furthermore, in another YouTube a passenger tells what he experienced while flying: Passengers were told to lower the window shades during daylight apparently so they could not see the chemtrails the plane would be laying down. According to the report, the captain ‘invited’ everyone to lower the shades, which apparently was a ‘command’, since the stewardesses went through the cabin enforcing the captain’s ‘invitation’. The curious traveler admits that he lifted the shade slightly and saw chemtrails.Additionally, that same passenger talks about how on a flight he was ordered to put his camera into the luggage bin because it would interfere with the plane’s electronics, yet a few seats away from him, he said other passengers were using computers! Maybe before you book your next flight you should ask if that airline sprays chemtrails.If more of the public did that, maybe an awareness factor could be raised so that travelers don’t want to finance, patronize, or fly in planes of airlines that are contributing to ‘global warming’ by spraying aluminum chaff and toxic chemicals to control the weather and harm us. Those toxic chemicals are in canisters in the belly of the plane directly under where passengers are sitting. Can there be any vapor exchanges into the passenger cabin? I contend that the FAA needs to do a study on that—and soon! Furthermore, Mr. Saive states that in 1990 the U.S. Department of Defense published a “Chemtrails Manual” for pilot training at the U.S. Air Force Academy! So what should air travel passengers expect if their airplane flies through chemtrails while in the sky?I don’t think anyone knows the answer. However, there is such a thing as aerotoxic syndrome [1] that’s been talked about, plus another consideration should be the Fukushima radiation that may be impacting air travelers since it, too, is up there with all the chemtrails. How much does that amplify the effects? Does anyone know? Mysterious CloudsTo add some added mystery as to what’s in the skies above, please check out this YouTube video wherein a couple Arabian men film a ‘weird’ cloud falling out of the sky, plus landing alongside a road. Note how truly weird the cloud acts: standing up like a person would. The ‘cloud’ looks like it has plastic-like qualities as it tries to break apart. It is not amorphous like vapor clouds should be. At one point, one of the men gets out of the vehicle and approaches the ‘cloud’, even puts his hand into it—something I encourage readers never to do, as geo-engineered clouds apparently are filled with all sorts of toxic chemicals. That same reasoning should be applied to snow, especially with children playing in it, eating it, or the rain. Don’t play in the summer rain, as I used to love to do as a kid. You don’t know what toxic chemicals could be raining down on you and penetrating your skin. Always carry a fold-up umbrella in your handbag or brief case just in case you get caught in the rain. It’s that serious of a concern, I’d say. Coincidentally, while writing this blog I received an email from a kind soul stating,

Personally, if I suspected I had come into contact with radioactive rainwater, I would immediately immerse and soak myself in a warm water bath with one cup of white vinegar and ¼ cup of sea salt. (Source)

If readers don’t realize the seriousness of the chemicals and aluminum in chemtrails, maybe you would like to listen to what Russell Blaylock, MD, retired neurosurgeon, has to say about nano-aluminum particles in chemtrails and what they can do to the human brain, especially regarding memory and learning. Aerosolized aluminum enters the brain. Nano-size aluminum particulates enter the brain even more readily. Has your curiosity been aroused enough to listen to Dr. Blaylock? I sure hope so.  Moreover, metal toxicity is real.It should be considered as seriously affecting human health. If readers don’t know about metals/minerals getting into the body, then please consider this: Have you ever seen a green sediment mark in your bathtub coming from the faucets? That’s copper sloughing off from copper tubing pipes. Have you seen dark brown reddish, almost black, streaks on the outside of stone buildings? That’s iron. Have you had to clean out white powder residue from bottom of the inside your tea kettle? That’s calcium. So, even though minerals don’t appear in their hard form as rock or an object, they do make it into the body in various minuscule ways. Nano-sizing minerals/metals on purpose seems more insidious, in my opinion. Here’s another YouTube with geo-engineers, specifically David Keith, admitting that they’ve not done anything serious in research on aluminum. That should be grounds for criminal scientific negligence, I think. Now, contrast that with what Dr. Blaylock, a neurosurgeon, contends. Furthermore, carefully listen to what a journalist in this video has to say after attending the four-day symposium. How bizarre can it get?Many folks are convinced that chemtrail chemicals and nano-particulates are contributing to a newly-emerging skin problem that has been termed Morgellons Disease/Syndrome. The Carnicom Institute, a research and educational facility, is devoting resources to understanding Morgellons. In an article by Amy Worthington, “Chemtrail Polymers Linked to Morgellons Disease,” on The Carnicom Institute’s webpage we find this:

YOU ARE NOW BREATHING ETHYLENE DIBROMIDE, NANO-PARTICULATES OF ALUMINUM AND BARIUM AND CATIONIC POLYMER FIBERS WITH UNIDENTIFIED BIOACTIVE MATERIAL: “We the people have not been warned, advised or consulted but are certainly vulnerable to the outcomes.” Lightwatcher.com “Biologic components have been reported in airborne samples that include: modified molds, desiccated red blood cells and exotic strains of bacteria.” [….]

Researcher Clifford Carnicom has reported finding chemtrails fibers that are an exact match with the bizarre fibers found in those suffering from Morgellons Disease. Welcome to the brave new world of toxic barium skies, weather control, mind control and population control through the use of chemtrails modulated with electromagnetic frequencies generated by HAARP. [….]

Are readers wondering what Morgellons skin problems look like? First, here are some of the ‘fibers’ taken from human bodies, which some think may be an effect of the scientific research leading up to trans-humanism. [2] Morgellons Disease Awareness has the most comprehensive collection of fibers in skin, urine, stool, and blood, plus particles in skin, hair damage, and water. As to what Morgellons looks like as an outbreak on human skin, please see these extremely graphic photographs:and thesePersonally, I believe it is most important to be careful with regard to outdoor exposure to the elements and be very careful about playing in the rain or snow because you really don’t know what’s coming in contact with your body. Morgellons is exasperating for many reasons:

In view of all that’s going on, which really is a weather anomaly, especially to those of us who are over 60 years of age and remember how things used to be in the skies, i.e., crystal-clear, sparkling blue skies for days at a time; billowing white clouds, not clouds whose undersides are smudged sooty gray all the time; a film-free atmosphere when one looks off into the distance; no chemtrail patchwork quilts in the skies; or more rainy and snowy days in a run than ever before, we have to hit the reset button, educate ourselves as to what’s going on over our heads that really is affecting us, and demand accountability. 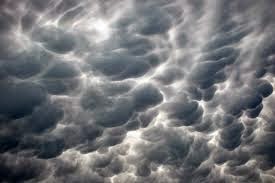 For readers who enjoy the unusual wherever it may be found, how about checking out the clouds in this collection. Those unbelievable cloud configurations apparently are recent additions to Mother Nature’s repertoire—or at least that’s what controllers are hoping we think—thanks to global ‘warming’, now renamed “climate change” apparently brought on and due to weather geo-engineering. If you don’t believe that, here’s an obvious credible resource, “Weather As a Force Multiplier: Owning the Weather in 2025,”  a research paper presented to the U.S. Air Force, the very same people whose planes are chemtrailing and who published a Chemtrail Manual in 1990 for Air Force Academy pilots. That, apparently, is how the government uses our tax dollars to control the weather and us! Notes: [1] http://en.wikipedia.org/wiki/Aerotoxic_syndrome [2] http://en.wikipedia.org/wiki/TranshumanismRelated Article by Catherine J. Frompovich: