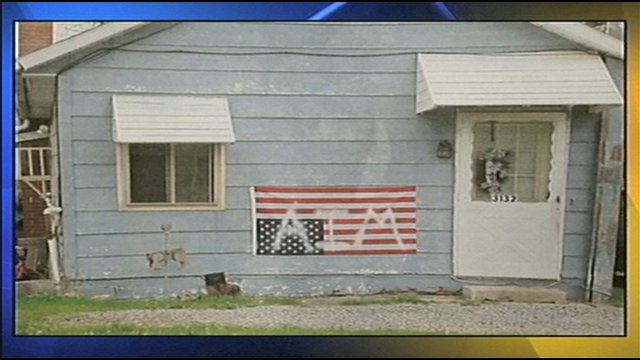 Apparently now, doing certain things to an inanimate object, an American flag, is a misdemeanor.

In Pennsylvania, a Native American man trying to send a healthy message to his fellow community members, is now facing misdemeanor charges because people were ‘offended’.

The man hung an American flag outside his house, and spray-painted ‘AIM’ on it.

Allegheny Township police Assistant Chief L.J. Berg said “I was offended by it when I first saw it. I had an individual stop here at the station, a female, who was in the military and she was very offended by it.”

“People have made too many sacrifices to protect the flag and to have this happen in my community, I’m not happy with that” Berg said.

The idea that this member of the enforcement class of government, this officer, would say that the military made its ‘sacrifices’ for that inanimate flag, and that is why he basically means it should be completely immune from criticism, is absolutely absurd to the point of near delusion. Those men and women are dying for the corporate powers that are behind the US military.  Does it even make sense to die for a flag? I guess that reveals the delusional nature of this nearly religious devotion to a flag.

Oh, and being offended is a great excuse to not listen to anything a person has to say, and to walk away, ignoring everything to preserve one’s own beliefs that could be forever shot down by a decent dose of reality. That is sarcasm, it is a terrible excuse.

Does this officer really believe that the US military fights for the pride of the inanimate banner of the United States of America?

Sounds an awful lot like fighting and dying for a gang bandana, a red or blue ‘flag’.

Anyway, the Native American man responded with calm reason and logic, saying- “If I don’t have a right to fly that flag upside down, which means a sign of distress, which this country is in so much distress right now, then what’s the point of having it?”

Very correct, this country is in GREAT distress, and it is made perhaps most apparent by observing inner city areas such as  South Chicago, The Bronx, Oakland, or Detroit. Even some areas that aren’t in the very inner part of a city are abandoned and in complete economic decay, such as Gary, Indiana (though it is close to an inner city area). I’m sure you all know this, but I think it’s healthy to point that out, there is a lot to learn from those particularly economically depressed areas.

The victim of the state’s original reasoning for hanging this symbolic flag, was that he “found that Wounded Knee is up for sale. Not only privately, but commercially. It’s just not right, and simply because I express myself in a way that somebody else doesn’t like or agree with doesn’t mean I should be persecuted for having beliefs.”

I absolutely agree, he should not be persecuted for having beliefs. It’s really not that complicated, but advocates of the state, and the ‘Murica Team’ supporting flag wavers probably don’t see this as simple.

And to those flag wavers, i hope one day you will realize what we are saying, and that most of you really don’t even know what you support if you support a ‘flag’, a symbol of endless complex abusive, violent actions taken by the US government. I hope you will join our side, you are welcome here, and I hope you know that none of this is intended to condemn you personally, but to healthily call out your false beliefs, to inspire change.

Please share this with as many people as possible, it is an excellent example of the lack of depth present in the philosophy of flag waving.

Editor’s Note: This is one of those articles that I put up for discussion. I was honestly offended myself by the spray painted “AIM” on the flag.  I see an upside down flag as a sign of distress. I see the paint as defacing it. Methyl makes some very valid points although they are not easy to swallow for me. I have always been a “flag waver.” Even so, just because something offends me that does not automatically make it a crime. What do you think? -Dean Garrison