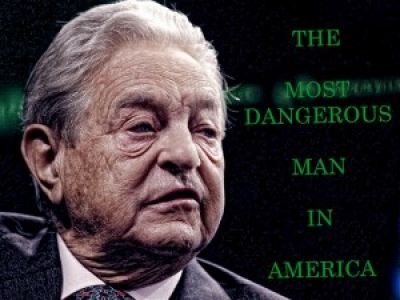 September 16th 1992 became known as Black Wednesday after George Soros, the Hungarian born banker, short sold sterling, which forced the UK government to withdraw the pound from the European Exchange Rate Mechanism. He became known as ‘the man who broke the bank of England’. It is said he made more than a billion dollars overnight. You can read more about that here.

Soros is not beyond positioning himself where he will profit by stock market crashes. A short time ago he was in the news because he made a billion dollar bet against the S&P 500, a move that some claimed signalled trouble ahead for the stock markets. This week his name is once again being bandied about in financial circles.

George Soros dumped his stakes in banks and went for tech and gold miners in the first quarter, according to a filing with the Securities and Exchange Commission Thursday. Soros sold his holdings in Citigroup, J.P. Morgan and Bank of America. He took new stakes in RF Micro Devices, Nuance Communications, Marvel Technology Group, Nokia Corp, and Cypress Semiconductor. Soros also boosted his stake in Herbalife and took a new position in Yamana Gold, AuRico Gold, and New Gold Inc. Cda.

When Soros dumps bank stock and invests in other areas he is sending a message that there is no money to be made, that the system is shot.

“We witnessed the collapse of the financial system … It was placed on life support, and it’s still on life support. There’s no sign that we are anywhere near a bottom.”

Could this signal that he now feels we have reached the bottom and the system is about to implode? Soros is not the only billionaire who is dumping stock. Warren Buffet and John Paulson are also quietly changing their positions as Newsmax reports:

Warren Buffett, who has been a cheerleader for U.S. stocks for quite some time, is dumping shares at an alarming rate. He recently complained of “disappointing performance” in dyed-in-the-wool American companies like Johnson & Johnson, Procter & Gamble, and Kraft Foods.

With 70% of the U.S. economy dependent on consumer spending, Buffett’s apparent lack of faith in these companies’ future prospects is worrisome.

Fellow billionaire John Paulson, who made a fortune betting on the subprime mortgage meltdown, is clearing out of U.S. stocks too. Paulson’s hedge fund, Paulson & Co., dumped 14 million shares of JPMorgan Chase according to a recent filing. The fund also dumped its entire position in discount retailer Family Dollar and consumer-goods maker Sara Lee.

Finally, billionaire George Soros has sold nearly all of his bank stocks, including shares of JPMorgan Chase, Citigroup, and Goldman Sachs. Between the three banks, Soros sold more than a million shares.

So why are these billionaires dumping their shares of U.S. companies?

After all, the stock market is still in the midst of its historic rally. Real estate prices have finally leveled off, and for the first time in years are actually rising in many locations. And the unemployment rate seems to have stabilized.

It’s very likely that these professional investors are aware of specific research that points toward a massive market correction, as much as 90%.

We all know that the financial system is a train wreck and that ultimately there will be another financial crash, one that will make 2008 seem like a minor hiccough. The question has to be then, if all those ‘in the know’ are dumping stock, is it a good deal closer than we think?