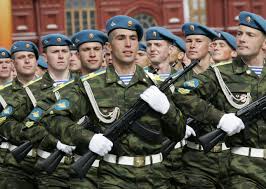 A SNAP exercise is when a country pretends to engage in military maneuvers and/or war games and the event is used to deceptively attack an adversary who is presumably caught off guard. We are now seeing evidence that both the United States and Russia are both engaged in potential SNAP exercises which could turn catastrophic in a moment’s notice.

Russian military activity near the Ukrainian border continues unabated.  Also, Russian fifth column provocateurs, inside of Eastern Ukraine, continue to provoke an all-out civil war which would give Putin the pretext he needs to invade and protect “innocent” Russians living in the region.

On March 28, 2014, I wrote an article in which I predicted that World War III would begin with an American attack upon Syria. In another article I wrote on April 3, 2014 and in another article on April 21, 2014,  I reiterated the fact that the unfolding evidence suggested  that the United States would invade Syria if Russia’s attempts to invade Ukraine appeared as if they would be successful and this is exactly what we are seeing, the United States is preparing for war, as two “war games” are commencing in Jordan and Israel this coming Sunday, May 25th.

Many ask, why would the U.S. attack Syria? If Russia takes over Ukraine, they will control much of the gas going into Europe and they can refuse to accept the Petrodollar. At the present moment, there is not much the Americans can do about Ukraine. However, an American invasion of Syria is a prelude to the American invasion of Iran which is selling oil for gold and this is putting stress on the Petrodollar. A Syrian invasion, and ultimately an Iranian invasion, will relieve some of the stress on the Petrodollar which forms the only backing for the dollar.

An United States attack upon Syria is going to happen, the only question is whether, or not, the attack will be precipitated by a false flag attack perpetrated by the Obama administration in which Syria will be falsely blamed and the event will serve as the pretext for an American invasion.

If I were Putin, and I witnessed a fake terrorist attack upon the United States, I would immediately invade Ukraine because it is much better to strike first.

US SNAP Exercises In Eastern Europe

NATO is putting boots on the ground in Moldova this summer and we are now only three weeks away from the total NATO militarization of Moldova. The Moldova connection is highly significant since this is the sight of a planned “war game” this summer in which NATO is practicing for a Russian invasion of the region.

According to Yahoo News, the U.S. and Ukrainian troops will take part in military drills with soldiers from 10 other countries at a shooting range in central Bulgaria, as reported by the Defense Ministry. Clearly, our military leadership is preparing for war and is busily engaged in forming alliances as a preparation for war.

Operation Rapid Trident (2014) is a very large, USAREUR-led multinational military exercise scheduled for this July and according to my military sources is still very much alive. The Trident exercise is to be headquartered in Lviv, Ukraine, near the Polish border. The exercise is a cooperative endeavor between Ukraine and other NATO nations. No doubt that the mere existence of this military exercise pushed Putin to act when he did when his forces moved into Crimea to protect the Black Fleet.

In the months of June and July, NATO is building a combat ready military response to the Russian soldiers amassed on Ukraine’s border. Ask yourself this important question, if you were Putin, would you allow NATO to consolidate its military position before attacking? Putin would be a fool to all NATO to “dig in”.  And through this entire event, Putin has proven to be anything but a fool.

IF PUTIN IS GOING TO ATTACK UKRAINE, HE MUST DO SO IN THE VERY NEAR FUTURE BEFORE NATO CAN CONSOLIDATE ITS FORCES.

These developments set the stage for what is coming next.

US War SNAP Operations In the Middle East

Ten thousand U.S. troops have been deployed to Jordan and Israel, for what we can call for the time being, “military exercises”. The first exercise is to take place in conjunction with Israeli forces in Operation Juniper Cobra. Simultaneously, U.S. forces are jointly training with Jordanian forces in Operation Eager Lion.

Stunningly, both operations commence this Sunday, May 25, 2014 and will continue until June 8th. Not so coincidentally, the exercises will cease around the time that NATO war games commence in Moldova, Bulgaria and Ukraine. If Russia wants to meet minimal resistance when they invade Ukraine, they must invade before the coming increase in NATO military presence in mid-June. I say “stunningly” because the combining of two different war games has never happened in U.S. military history. This could mean that World War III is imminent.

Actually, the joint U.S. and Israeli (IDF) military exercise got a head start with the importation of another 6,000 man contingent drawn from combat personnel stationed in the United States European Command with regard to this coming “war game” in Israel . Additionally, one thousand airmen have been deployed to operate missile defense systems during the exercise.

The IDF and the Jordanian war games are being coordinated by various US command centers. Many analysts, including myself are highly concerned that this war game truly represents a SNAP exercise, which will go hot and result in a direct attack upon Syria.

If Russia invades Ukraine before mid-June, the United States will open a second front in Syria and threaten Russian interests in the area. No doubt, Russia will respond by attacking into Eastern Ukraine and the world will find itself immediately plunged into a two front war in both Ukraine and Syria.

It would be foolish to think that Putin will stop at occupying Ukraine.  He will likely attack Eastern Europe as he attempts rebuild the old Soviet empire. Have you stored your food, water and ammunition?