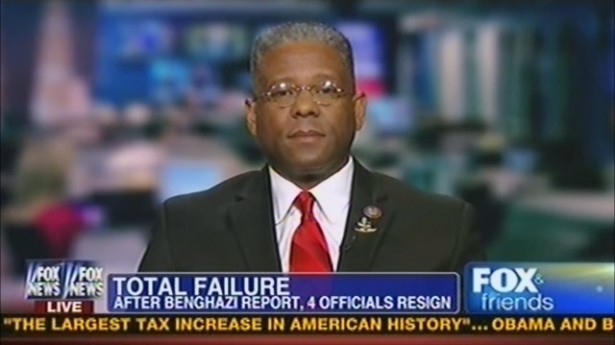 When will the right ever get it all right? While Allen West may be right about Benghazi being about weapons trafficking, he doesn’t have an answer as to the motives of the attackers. Would the terrorists who attacked the compound have done so because Benghazi was about weapons trafficking? That makes no sense. Exhaustive research conducted by Shoebat.com presents evidence that debunks one of West’s conclusions.

West has relayed some of the details of a conversation he had with an alleged witness to the Benghazi attacks. Part of his account comports with the findings brought to you by Shoebat.com [here, and here,]. West also dismisses a possibility that should not yet be dismissed. Often, things perceived as having to be necessarily mutually exclusive are not at all.

First, here is what West had to say about what was going on in Benghazi, as relayed to him by a co-passenger on a recent flight who claimed to have been a witness to the attacks:

…I learned, as I presumed, that there was a covert weapons scheme going on in Libya, Benghazi. We had been supplying radical Islamists with weapons against Libyan President Moammar Gadhafi, effectively supplying the enemy and destabilizing that country. And it seems that there was a CIA weapons buy-back program, the aim of which was to ship the retrieved weapons out of Libya through Turkey, and to the Islamist forces in Syria.

That account comports with our findings as well, but West is also a bit too presumptive in dismissing another allegation, that Stevens was to be kidnapped and exchanged for Omar Abdel Rahman (the “Blind Sheikh”):

No, it was not about a kidnapping scheme, it was about something, as I’ve stated, that will make Iran-Contra look like Romper Room. The web of lies spun is coming apart, and all other committee hearings on this matter should be shut down.

That Benghazi included a kidnapping operation should not be dismissed simply because of a confirmed weapons trafficking operation. Could not both be true? After all, the Community Organizer in Chief rules by his hero’s playbook, which states:

Use different tactics and actions and use all events of the period for your purpose.

In fact, West’s account of his conversation actually lends credence to the possibility that there may have been a kidnapping operation in play:

I came to understand why Ambassador Chris Stevens was there in the first place and that he had in fact requested better security but was denied – the question is, by whom? And I learned that the Martyrs of 17 February Brigade were in charge of security and were the ones who opened the gates, then fled.

If Stevens was in Benghazi to manage a weapons trafficking operation – which does indeed appear to be the case – why was he not protected? Doesn’t the fact that he was not safeguarded actually comport with the idea of a kidnapping operation? Ditto for having the February 17 Martyrs Brigade running security; releasing the Blind Sheikh is one of their goals. In fact, as Shoebat.com demonstrated in detail in Addendum H of our “Ironclad” Report, when an explosion rocked the Benghazi compound just a few months earlier on June 6, 2012, it was the Brigades of the Imprisoned Sheikh Omar Abdel-Rahman that was responsible, as this video clearly demonstrates (video starts at 2:35 mark to show explosion):

What must be made clear is that at the time of the Benghazi attacks, a weapons trafficking operation would have involved the following countries primarily, as demonstrated by Shoebat.com: the U.S., Turkey, Syria, Libya, Saudi Arabia, and Qatar.

However, the country with the greatest interest in kidnapping Stevens would have been Egypt, which was led at the time by the Muslim Brotherhood and president Mohammed Mursi. In fact, the protests going on outside the U.S. Embassy in Cairo on the day of the attacks in Benghazi, were not about the anti-Muhammad video; they were about demanding the release of the Blind Sheikh, as reported by none other than CNN’s Nic Robertson, as Shoebat.com relayed in EXHIBIT Z. It is at least possible that there were competing agendas (use all the events of the period).

An important question that must be answered in this regard, was answered by our “Ironclad” Report. That question is: Was Egypt involved in the attacks?

The answer is unequivocally yes. Two pieces of evidence (video and document) point to Mursi himself (EXHIBIT A and B). Exhibit A is video from a cell phone in which one of the attackers that night can be heard shouting that “we were sent by Mursi.” Exhibit B is a Libyan Intelligence document that says Egyptians arrested in connection with the attack also said they were sent by Mursi.

Editor’s Note: One must also pay attention to how Col. West has taken up the mantra of the Bush administration in distinguishing “radical muslims” from what Islam is. This is something that we pointed out back when he issued a letter of capitulation on Islam, claiming that radicals had hijacked it, as though Islam is a religion of peace, which it is not. This is probably due to political aspirations, which he claimed when asked to get behind the Obama eligibility issue. It’s all about politics.

*Ben Barrack contributed to this article.