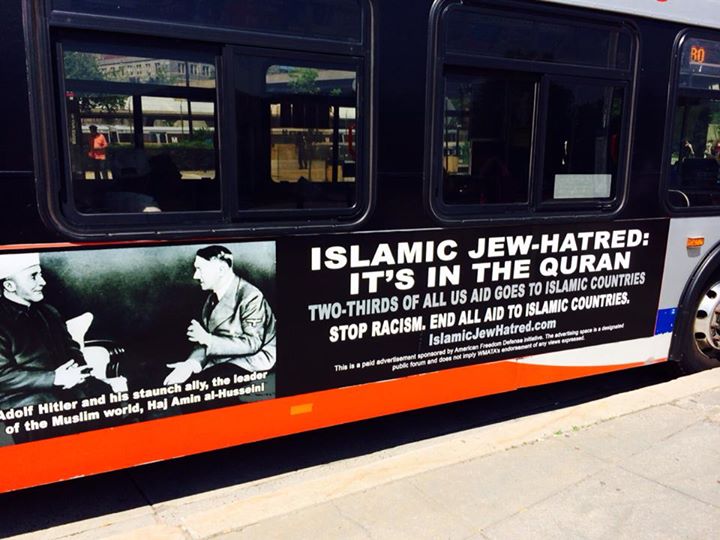 Hitler and the Quran have a lot in common – they preach anti-Semitism. But when the American Freedom Defense Initiative ran ads to that effect in Washington buses, all hell broke loose. 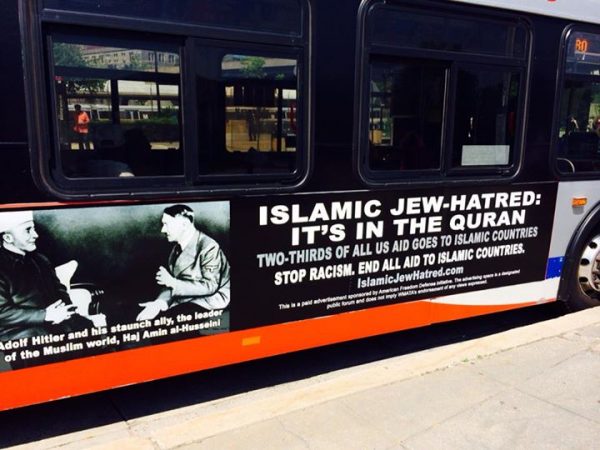 NEW YORK. Bus ads sponsored by my organization, the American Freedom Defense Initiative (AFDI), hit the streets last week in Washington, D.C., and the jihad-aligned media is in a frenzy to shift attention away from their message.

These ads are important because people today know little to nothing about how the Mufti, the most influential figure in the Islamic world at the time, collaborated with Hitler because of their shared anti-Semitism. The same Islamic anti-Semitism that the Mufti held so virulently informs the “Palestinian” jihad against Israel today and Jew-hatred around the world.

The Mufti raised up a Muslim SS division and was personally responsible for the deaths of hundreds of Jewish women and children. After the war, he should have been executed. He was arrested and was awaiting trial, but escaped his rather limp-wristed captors and took refuge in King Farouk’s palace in Egypt. Yassir Arafat was his natural heir; indeed, Arafat, the modern godfather of terror, was the Mufti’s nephew.

We put these ads up in response to vicious Jew-hating ads that American Muslims for Palestine (AMP) unleashed on Washington Metro buses last month. Our ad campaign is critical to informing the public of the truth – as has been made clear by the furious disinformation and Islamic propaganda that the media and Islamic supremacist groups have been pumping out in response.

ABC’s Washington outlet quoted a bus passenger saying the ads were “racist.” They didn’t quote, of course, anyone in support of the ad. The uber-left Israeli newspaper Haaretz called the ads “anti-Muslim.” The ads are “anti-Muslim?” Really? Are all Muslims virulent Jew-haters? Apparently Haaretz thinks so. That’s what their headline implies. Funny how ads that are factual and true are called such names.

For much of the enemedia, the ad is all about … Hitler. Even for them, that’s a stretch. It’s amazing the lengths the mainstream media will go to in order to avoid mentioning Islam, jihad and what’s actually in the Quran. In an article in, all of places, the Times of Israel, they didn’t even run the ad, just a big photo of Hitler. In the interview I had with them, they asked me where I found anti-Semitism in the Quran. I sent them 24 verses; they ran not a single one of them.

It is interesting how the media never looks into what is said in the ad — that Islamic Jew-hatred is in the Quran or that two-thirds of all US aid goes to Islamic countries. No. They just obsess over my unmitigated gall to repeat it. It’s my saying it that’s the problem. The truth is the problem. That is why we find ourselves incapable of dealing with the gravest threat this nation faces. The problem is that we can’t talk about the problem. The American people are being disarmed and defeated by our own elites. These ads change that.

The Washington Post’s fact-checker contacted me, asking me for documentation of the assertions in my ad – which I supplied to him. I also asked him why he didn’t fact-check the numerous anti-Israel ads that have run in Washington and all over the country.

The Hamas-tied Council on American-Islamic Relations (CAIR), meanwhile, is giving out free Qurans in response to our ad. They never miss an opportunity for dawah [proselytizing, ed.]. Our new ad challenges Islamic Jew-hatred, and instead of denouncing Islamic anti-Semitism and fighting against it, they give out Qurans. But they must know that if anyone actually reads the free CAIR Quran, he or she will find that our ad is correct.

Nihad Awad of CAIR fumed: “This is a propaganda campaign designed to incite hatred against American Muslims, and this campaign has been based on false information, taking things out of context from the Quran.” Always “out of context.” So many Muslims take the Quran “out of context” in the same way, and Awad doesn’t say a thing.

My intent has been accomplished: to leapfrog over a media that is not even-handed, that is advancing the jihadis’ propaganda against the Jewish state. And it is working. People are talking. That is a good thing even if the sharia-compliant media is hostile. The truth is a powerful thing, and so many people are unaware of Islamic history and the role of Muslim world during the Holocaust. But now, people are talking about the Mufti of Jerusalem and his support for Hitler.

People are finally beginning to understand the root cause of the Israeli-Islamic conflict. We are going to roll these ads out nationwide.